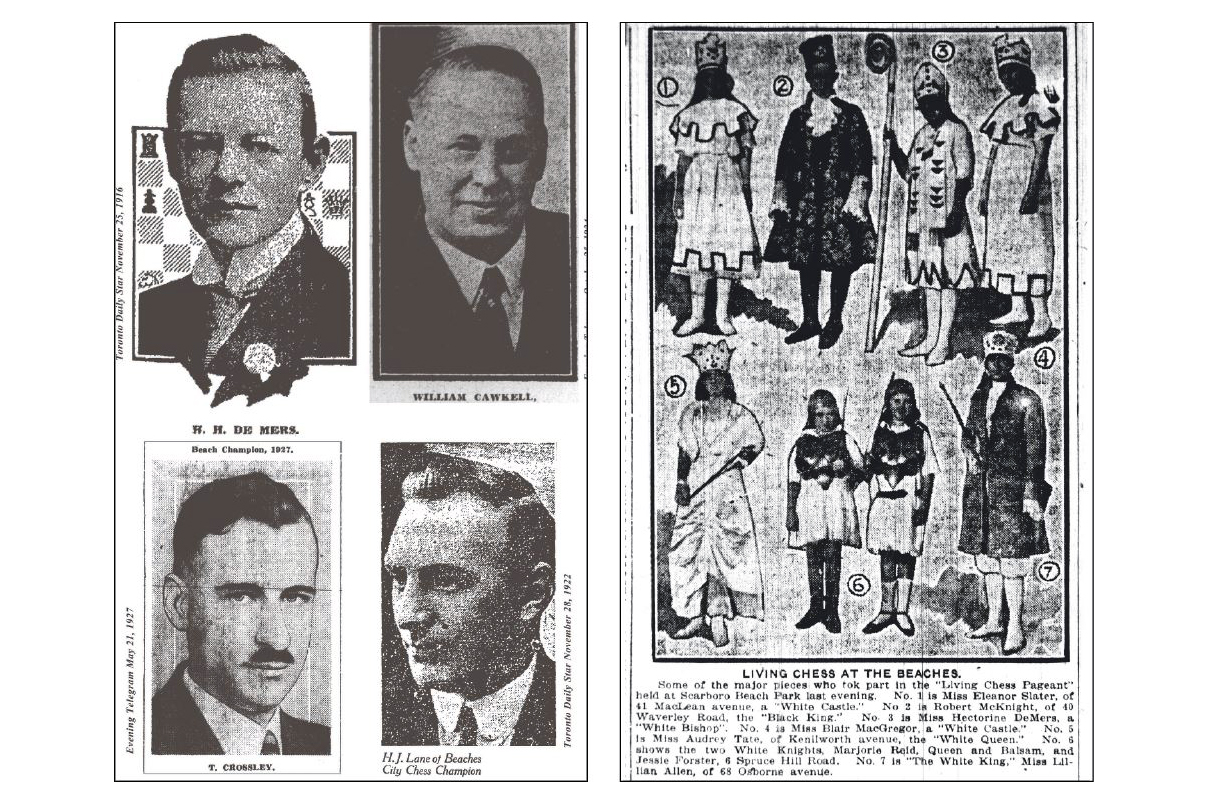 Clippings from past newspapers are part of the author’s presentation at the Feb. 13th Beach and East Toronto Historical Society meeting at the Beaches Library on Queen Street East. Images: Toronto Daily Star, Evening Telegram

The Beaches Chess Club was formed in 1915. The initial name, Kew Beach Chess Club, was likely rejected by the players who lived near Balmy Beach.

The founders were members of the Toronto Chess Club. Hector H. De Mers was elected the club’s Publication Agent. He was a manager, inventor, and later publisher of The Ratepayer who lived on Kew Beach and later moved to Waverley Road, and then to Columbine Avenue. He started a chess column in the Toronto Daily Star where he announced the formation of a Beaches club and frequently reported on club activities. Perhaps Hector’s greatest publicity stunt was organizing a living chess game at the Scarboro Beach amusement park, with local children playing the chess pieces. A Girl Guide blew a bugle call every time a piece was captured.

William P. Cawkell, an accountant and a bowler, lived on Spruce Hill Road and later on Pine Crescent. He had years of experience playing on chess teams in northern England and Scotland. Cawkell’s enthusiasm for the social interaction of team chess helped activate the Toronto Chess League.

In the 1921 Toronto Championship, Cawkell set a Canadian record for the longest game, 12.5 hours, played over several evenings. He lost to Evening Telegram chess and checkers columnist Malcolm Sim.

I wonder if Cawkell had a collection of British chess books he would share, as several Beachers strength increased. Did being close neighbours allow frequent playing? John T. Wilkes, piano maker, Harry J. Lane, commercial artist, and the older half-brother of junior Thomas Crossley were all living on Pine Terrace, directly east from Cawkell’s backyard. Wilkes ended up being the top scorer on the Beaches team, Lane, who later moved south to Fernwood Park, won the 1917 individual city championship over 71 others, and Crossley, who lived on Woodbine, later on Walter, won 17 tournament games in a row. Beaches Secretary Herbert C. Hopkins, who lived above his shoe repair store on Queen Street East, west of Beech Avenue, was a solid bottom board. These five core players totalled over 120 wins over seven seasons for Beaches, scoring 67 per cent.

Joining Crossley on the executive committee in the 1920s were Malvern teacher Louis H. Graham of Balsam Avenue and architect Charles D. Lennox of Patricia Drive. In 1926, the club played a fun match with Police Station 10.

Beaches first met at the Kew Beach Lawn Bowling Club. They moved to the Balmy Beach Club, with the checkers club, St. John’s Norway, Bowmore Road Public School, Bellefair United Church, and ended in the 1970s at the Pape Recreation Centre on Gerrard Street East. Then, members transferred to the Scarborough Chess Club on Macey, northeast of Victoria Park and Danforth Avenues. Today the Scarborough club on Ellesmere is thriving with over 100 members.

A list of the top players in Beaches history would have to include Barrister John Wesley Beynon, of Queen Street East and Spruce Hill Road, who played in the 1908 and earlier Dominion Championships. Accountant Charles A. Crompton of Scarborough Beach wrote the Toronto Daily Star chess column from the 1940s to the 1970s. Howard F. Ridout was a standout junior in the 1930s and promoted chess for 60 years. Rudy Draxl, the 1960s Harmonie club champion, lived off of Gerrard Street East, near Ridout, but, surprisingly, they were not friends. Victor Dzera, who lived on Waverley Road, of Monarch Park was the 1970s Beaches Chess Club Champion and won a couple of big weekend tournaments. And a decade ago I noticed a chess crosstable in the Remarkable Bean coffee shop. The winner was Robert Morrison who won Toronto Championships in the 1980s, and invented an opening move which impressed the ex-World Champion Mikhail Tal. He’s currently hosting a series of chess events at the Beaches Library.

A sharp eye might have noted a couple of Balmy Beach Hall-of-Famers in this article. More details at my slide show at the Beaches Library, 2161 Queen St. E., on Feb. 13 at 7 p.m. which will also mention other leisure-time activities from 100 years ago. No chess knowledge required.

Enjoying very much having my home Beach.news. My sister and myself the up on the boardwalk the area was a magical place to two girls living in difficult circumstances.