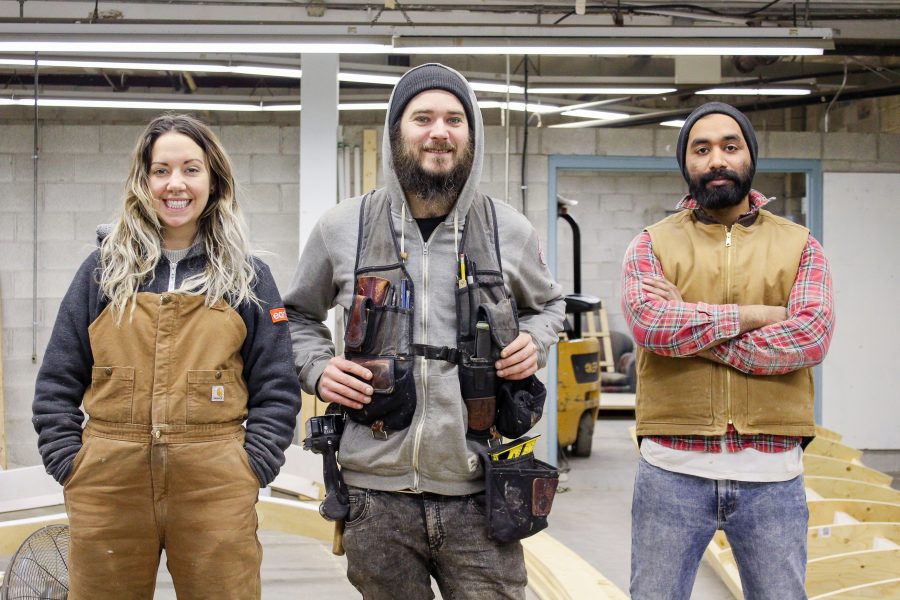 Seven years ago when Alex Wilson and Alan Johnston founded their building company Anex, it was a more utilitarian venture than it is today.

“Our main focus was furniture at first,” said Wilson. “And then that switched to custom everything.”

That everything has come to include 12-foot-tall hands, the reconstruction of a full-grown tree for a railroad museum’s display in Windsor, and a giant replica of the pink pussy hats protesters donned during the 2017 Women’s March.

The oversized hat, which the Anex team has been working on at a rented warehouse near Danforth and Warden Avenues, will soon appear at Woodbine Beach, joining six other public art installations that make up the annual Winter Stations exhibit. The fourth annual public art and design competition opens on Family Day, Feb. 19, at Woodbine Beach.

“These kind of projects that we’re doing, I never really imagined that we would be doing these kinds of things,” Wilson said, adding the idea of doing “non-conventional, weird stuff” has always intrigued him.

This winter is the fourth time that Anex has helped construct the displays, which are responses to an annual international call for submissions, and it is a challenge that the company’s trades have a lot of fun with.

“We’re all a bunch of creative folk.”

“We’re all a bunch of creative folk,” said Wilson, a landscape architect who, after two years of work in the field, decided he didn’t want to sit in front of a computer all day.

“These Winter Stations, what’s really nice about them is it allows us to build things that we would not ever build in somebody’s backyard or on private property,” he said.

The project keeps them busy during the winter, a time when they aren’t doing the type of labour that floats Anex during the warmer months, such as constructing custom wooden decks.

It typically takes Anex six weeks to build the stations with only the artists’ plans to consult.

Anex is also responsible for maintaining the displays, which are built onto lifeguard chairs, from Feb. 19 to April 1.

Most of the Winter Stations survive their two-month stints in the Beach, but at least once the Anex team had to remove an installation due to vandalism.

“I kind of think that that’s part of the art exhibit, the life and death of the pieces,” said Wilson. “I’m not encouraging it,” he laughed.

Sarah Huxhold, who has been with the company for three years, explained, “We want people to interact with the pieces anyway, which is really great, but we don’t want people to destroy them.”

Overall, its the variety of projects that Anex takes on that is a big draw for Huxhold, who used to work a more conventional job in residential construction.

“We do something different every single day. Every season is different, so it keeps it interesting,” said Huxhold.

I love them!
Just two suggestions.
Put the warming stations up earlier.
Keep the best voted, up the whole year.
Such great work!-it seems a waste to just take them down in a month.