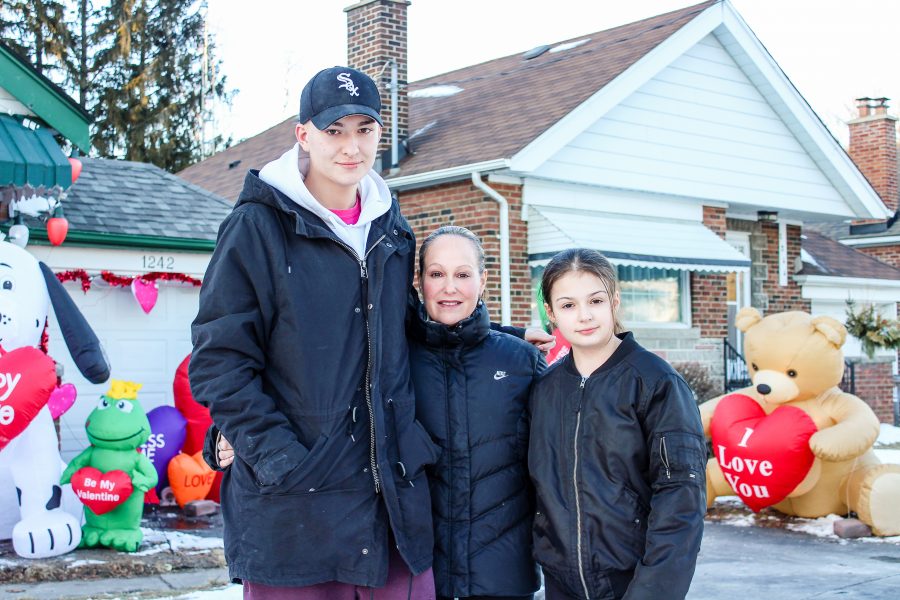 Natasha Scotland never wanted to take down her childhood Christmas trees and decorations.

Like many kids, the Birch Cliff resident enjoyed setting up the festive displays.

But she didn’t care at all for the clean-up process—it meant the end of a celebration, gifts and cheer.

“It was always so sad,” she recalled.

She decided that when she had kids of her own, they wouldn’t have to go through her post-Christmas malaise. She’d keep a tree up all year, redecorating it according to the season.

So shortly after her son, Connor, was born in 2001 she began setting up elaborate lawn displays in front of her Kingston Road bungalow just east of Fallingbrook Road to complement the tree she keeps set up in her front window, year round.

“It’s more fun when you have kids because you want it to be magical for them,” she said.

There’s Christmas in July—complete with Santa in a hula skirt—as well as fall and Halloween displays, Christmas proper, Valentine’s Day, St. Patrick’s Day, and Easter. “I usually plan a month before,” said Scotland, who has dedicated a Facebook page to her decorations.

Scotland’s displays, largely comprised of inflatable items, are hard to miss. She has an 18-foot-tall air balloon and a custom winter house that she had designed in China and shipped over to debut this Christmas.

How much has Scotland spent on the displays since starting the tradition?

“Oh dear, without sounding like I’m crazy? I don’t know,” she responds. Most inflatable items cost about $100 in US funds, she adds, though some custom creations cost considerably more.

The current display outside the house takes about 40 minutes to take down and put up each day—a precaution taken to protect the inflatables from damage—with the help of Scotland’s 17-year-old son Connor and her daughter Loghan, 11.

The expense is all worth it for Scotland, who is already plotting her next St. Patrick’s display, which should appear a few days after she packs up the Valentine’s scenery on Feb. 15.

“If you smile when you go by my house then I’ve done what I’m supposed to do,” she said.

I’ve marveled at these displays for years and think they are fabulous. I always thought about knocking on her door and thanking her. With all the distractions and worries in this world, her front lawn is a refuge.

This isn’t in the Beaches but is in the Bluffs (in Cliffside), much further east of the Beaches. But cheering everyone who passes by up 🙂

It’s the Beach not Beaches!