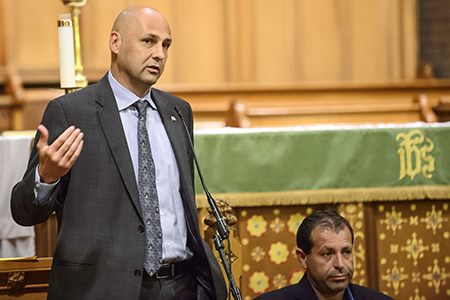 Ahead of the upcoming October 2018 municipal election, a pair of prominent Beachers are expressing interest in representing Ward 32 at city council.

“I am still considering it,” said Upper Beach resident Lisa Kinsella. “I consider running for council to be an incredibly important decision and one that must be weighed heavily.”

It wouldn’t be Kinsella’s first foray into politics. The Liberal is a managing partner of the Daisy Group, a political consultancy headed by her husband, Warren.

“I have a very good understanding of how things work and how to get things done,” she said.

Asked when she expects to make a decision, Kinsella said, “I’m hoping by the time we start hearing the birds sing I’ll have a better idea of what I’m going to do.” Candidates can’t officially register until May, she noted.

Having raised a family in Ward 32, Kinsella suggested she is familiar with the most important issues facing the community, including crime, housing affordability and an “ongoing discussion about bike lanes.”

Housing affordability was one of the key local political issues highlighted by Matthew Kellway, who said he is “very seriously” considering a run for council.

The former New Democratic MP for Beaches-East York and Upper Beacher pointed to his political background and ties to the community as qualifications for a potential council bid.

During his time as an MP, Kellway was also the opposition critic for urban affairs and infrastructure. “It’s a unique experience,” said Kellway, adding it allowed him to consult with mayors and councillors across Canada.

As well as drawing attention to housing affordability, Kellway noted transit “remains a critical issue” here and he stressed the importance of providing shelter for the homeless. Kellway is chair of the Out of the Cold program at St. Aiden’s in the Beach.

He also mentioned the importance of advocating for “contextually appropriate development” in the ward given strains to local social infrastructure.

“We have a lot of families in this ward that have struggles accessing recreational facilities for their kids, whether its ice time at Ted Reeve [Arena] or time for lessons at our local community centres,” he explained.

Kellway has not set any personal deadline for when he’ll decide whether or not to run.

Current Ward 32 Coun. Mary-Margaret McMahon will not be running for a third team due to her self-imposed two-term limit, a promise she made during her inaugural campaign.

Over in Ward 31, Coun. Janet Davis said she has not ruled out anything in terms of the forthcoming election.

Wow! Two titans with exceptional knowledge, skills and experience . Ward 32 is fortunate to have people of such substance willing to run for Council. Mary-Margaret McMahon has also kept her promise to a two term limit which is a rare quality in politicians now-a-days. They will all fare well.

If she’s planning to use bike lanes to divide us, no thanks.

Good question. Attend their Candidates Meetings and ask them.

Here’s our Ward 32 School Trustee who reached her stale date about 15 years ago…….bub bye……………
“A career NDP Toronto District School Board (TDSB) trustee is on leave with pay after the board’s integrity commissioner found her guilty of “discreditable conduct” for using the “dyke” word repeatedly at an expulsion hearing last fall. At a lengthy meeting Wednesday, her board colleagues — most of them socialist and union-backed — refused to consider a public censure of 30-year-plus trustee Sheila Cary-Meagher, or leave without pay, even though integrity commissioner Suzanne Craig’s report made it clear the trustee’s behaviour was abhorrent.” Toronto Sun

Matthew Kellway must be having a hard time finding employment in the private sector. And who is Lisa Kinsella other than someone fomenting opposition to bike lanes based on the NIMBY attitudes of herself and her neighbours? (They are causing increased traffic on her street! Waaah!)

Do some research on Lisa Kinsella and you will find a hell of a lot substance about her. Frankly I find your comments ridiculous, stupid and ignorant. Kellway is a skilled politician and both of these people have a lot to offer Ward 32. Perhaps you should run!

Agree with Joe, we need some politicians who will deal with the issues and grow the economy and not just propose more taxes, bike lanes and carbon taxes as the cure to all ills.