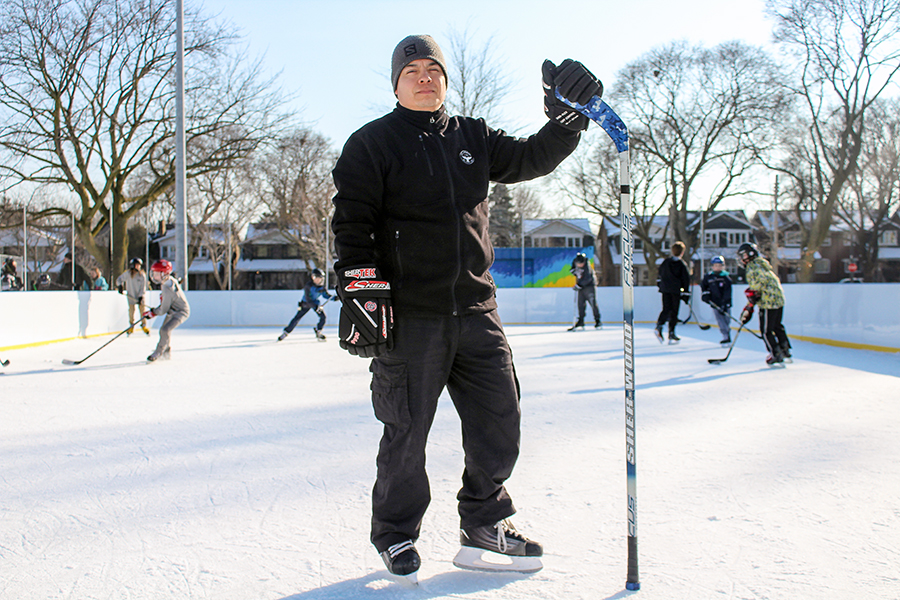 Rafael Moctezuma is a member of the Ice Masters, a volunteer group that maintains the rink at Fairmount Park. PHOTO: Josh Sherman

For at least 60 years, Fairmount Park has hosted a hockey rink—but something is different this year.

“Prior to this year, we had a hockey rink that was essentially just a bunch of plywood put together,” said Rod Smith, a volunteer who helps maintain the community shinny rink.

He is one of more than 75 volunteers who make up a growing group called the Fairmount Park Ice Masters. “We’re definitely growing every year,” said Smith, who joined the group 12 years ago.

“It’s a very localized community group of volunteers—mostly dads of kids in the neighbourhood—[who are] all very supportive of the community… and just a group who are really committed to having an area for the kids to play in the winter and get out and enjoy the cold weather,” he explained.

The group has been maintaining the rink since 1992, when the city stopped doing so, and more recently, with the help of local Coun. Mary-Margaret McMahon, it applied for funding to get a safer, more modern board set up complete with safety netting.

“The Ice Masters, we are very supportive of what they do,” said McMahon. She added that the upgraded rink is part of a broader plan to renovate Fairmount Park. “We’re redoing the playground this year.”

While the city provided funding to the tune of approximately $20,000 for the upgrades, the Ice Masters raise money from the community to cover the cost of maintaining the rink throughout the winter season.

With the new rink now fully up and running, the Ice Masters are setting their sights on the 9th annual Fairmount Park Winterfest, which is slated for Saturday, Feb. 3, from 2 p.m. to 5 p.m. In case the event needs to be postponed due to weather, it will take place the following Saturday.

Winterfest features live music, food—including popcorn and candy machines from Community Centre 55—a bonfire and tobogganing. “If we need to, we truck snow in for the hills, for the tobogganing,” said Bernard. “That’s become a bit of a tradition early Saturday morning.”