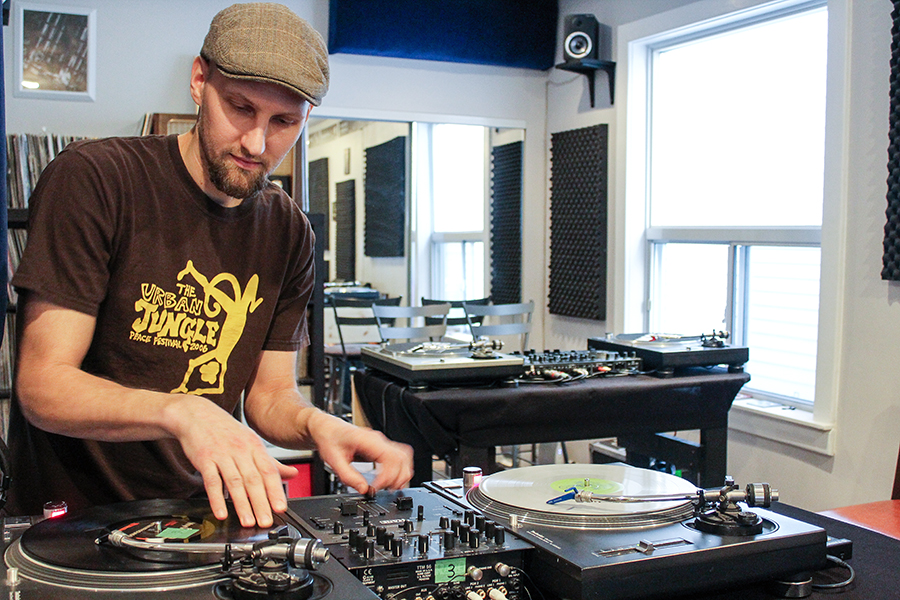 Laar doesn’t just mean music is played here (on this afternoon he nods along to a selection of instrumental hip-hop beats).

It is the home of his venture Off Centre DJ School, where students learn the ins and outs of DJing and music production.

And there is a lot more to it than pushing the play button.

Laar and a handful of other instructors train small groups how to master DJ skills like how to beatmatch—that is, get two songs to play at the same tempo at the same time by adjusting their pitch—scratch, plan live sets, and EQ, or adjust the frequencies of songs.

There is so much to learn that Laar, a Greenwood resident who has gigged with industry names including Kid Koala and RJD2, developed 12-week 36-hour programs in both the DJ and production streams. Weekend workshops are offered as well.

Graduates of the program have gone on to DJ elsewhere and release music through other labels or by themselves, but Laar said something else is at the core of Off Centre’s lessons.

The school has been running since 2004, always in the east end, but had bounced around for the first half of its existence.

“I kept on getting kicked out of studios because of either condo development or just sales or whatnot,” he said.

Then, around seven years ago, Laar was able to purchase the school’s current location at 201 Coxwell Ave. guarding against future evictions, and providing lots of room for all the turntables, mixers, and other gear that comes with the territory.

An owner of two to three thousand records, Laar’s passion for music started young, but it wasn’t until he discovered the turntables that it took on such importance for him. His parents, however, weren’t as enthusiastic about his musical aspirations. “My parents are pretty cool, but they had their reservations and their doubts,” he said, after a laugh.

Today, Laag suggested they are singing a different tune. “I think they’re pretty happy,” he said. “I’m not, like, living in their basement.”

No, Laag owns real estate in Toronto, one of the nation’s most expensive markets. “Absolutely—something worked out,” he said.