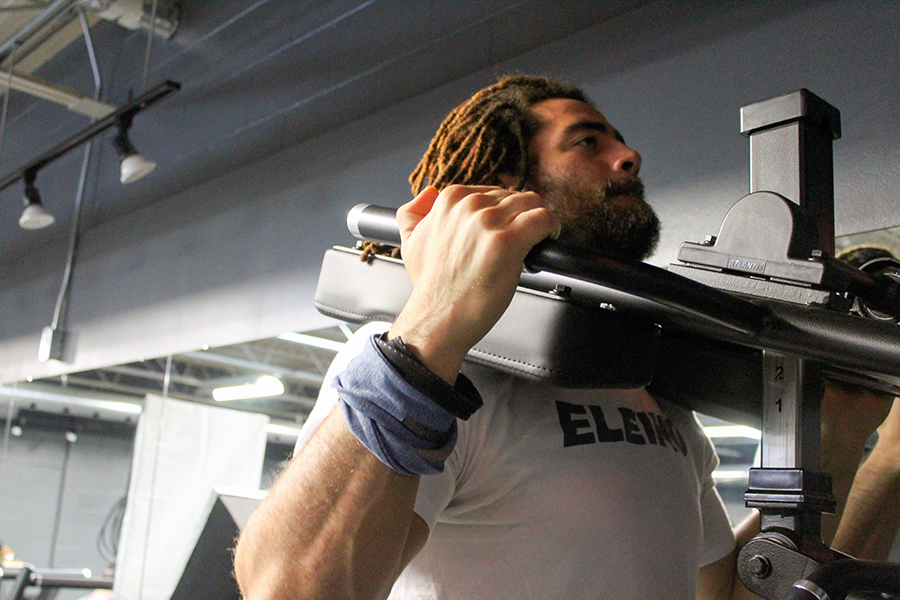 NFLer Jared Odrick is a fan of the east end.

The free agent, who was released by the Jacksonville Jaguars in February 2017, has been spending lots of time in the Beach of late, training at Link Integrated Health five days a week and visiting local businesses like Grinder Coffee and the Beach Hill Smokehouse.

Recently, he dished on what he likes about the area. “It doesn’t seem to have the pressures of west Toronto,” said Odrick taking a break from his workout regiment at Link. “There’s not as much performing going on. It’s just kind of straight up what it is and what it isn’t—and I enjoy that.”

Since 2008, Odrick has visited Toronto each year, a tradition that started when he was still playing college football at Penn State.

His then girlfriend, who hailed from Richmond Hill, showed him around town. “I ended up getting around the city better than her within a year,” he recalled.

Over the years, Toronto became a getaway for Odrick, a place he could come to escape the NFL from time to time. “People spoke English and drove on the right side of the road, so it (Toronto) didn’t feel too far off from what I was familiar with, but it was different because I wasn’t constantly surrounded by football,” he said.

In 2016, he bought a home near the AGO, and that’s where he’s been staying lately as he figures out his next move. “It feels so stupid when I say what I’m interested in because there’s like 30 things I wanna say,” he said. “I literally feel like an 18-year-old kid again.”

His future may or may not involve football. He says he has turned down a number of offers from NFL clubs, and describes getting released by the Jags as feeling “freeing at the time.”

“I felt that the dogma of football had boxed me into being somebody that I didn’t appreciate,” he said. “When I looked at all the people that I appreciated or looked up to or wanted to be like, it didn’t really exist so much within football anymore.”

One of those people is American mythologist Joseph Campbell, whose book The Hero With a Thousand Faces Odrick strongly recommends. “I wrote a lot of notes in that book,” he said.

On top of immersing himself in literature—Odrick is currently on the classic grammar book The Elements of Style by William Strunk Jr.—the pro athlete has been keeping busy by taking acting lessons and consulting on an HBO show.

Whatever he ends up doing, Odrick wants to dispel the idea that athletes can’t be intellectuals, though he says that can be challenging. “It’s tough to embody an intellectual… because people see 6’ 5” and a half, 300 pounds [and] dreads,” he said. “People end up conjuring up their own definitions of your physical appearance.”