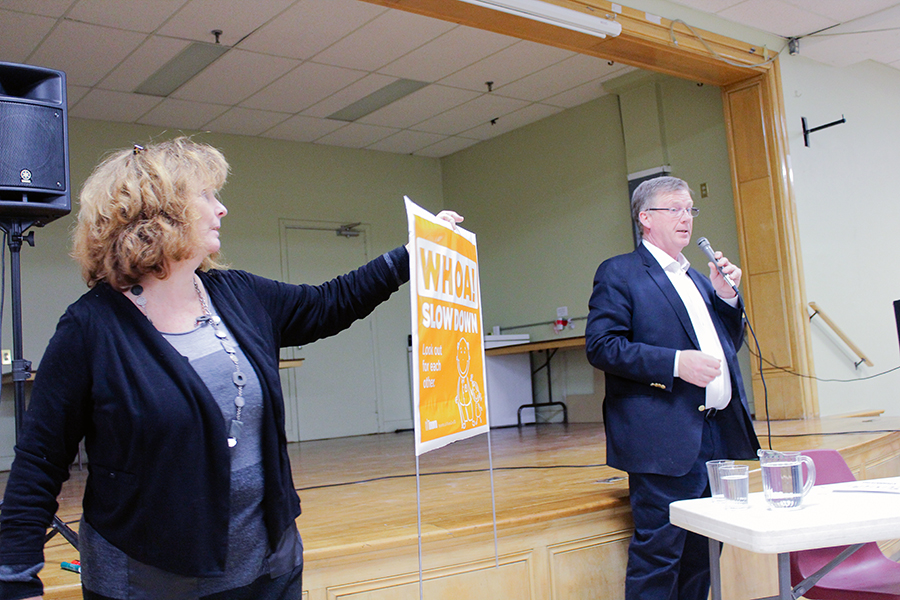 Birch Cliff resident Amy Corcoran was already worried about children getting hit by motorists in her area.

Then one struck her four-year-old daughter, Violet Graham, as she crossed Warden Avenue at Freeman Street on her way to school on Nov. 3, 2017 with her caregiver.

“We were extremely lucky that it didn’t result in death or more severe trauma,” she said at a community meeting hosted by Ward 36 Coun. Gary Crawford on Jan. 18 at St. Nicholas Anglican Church on Kingston Road.

At the meeting, which representatives from Toronto Police Services and Transportation Services attended, Corcoran and other locals got the chance to share their stories and comments as well as learn what plans the city has to improve safety on local streets.

The meeting was held in the wake of a pedestrian death at the hands of an alleged drunk driver on Dec. 21 at the intersection of Kingston Road and Warden Avenue, which, according to material provided at the meeting, has been the site of 42 reported collisions, seven involving pedestrians, in the last seven years.

To improve safety in the area, Corcoran said she’d like to see flashing signage, crossing guards, displays that show motorists how fast they are driving, and stop signs before school zones.

These were all measures that Myles Currie, the director of Transportation Services who was on hand, said were possibilities for the area.

In addition, Currie suggested “advance greens” for pedestrians could be added to the Kingston and Warden intersection.

“What we’re starting to look at is giving pedestrians the walk signal before the signal turns green,” he told the about 50 in attendance. “The pedestrians get into the roadway, they become a lot more visible earlier as opposed to entering the road at the same time as a car.”

Staff are mulling adding more time for pedestrians to cross the intersection as well.

Meantime, the city is looking at reducing the speed limit to 40 kilometres an hour on Kingston Road from Victoria Park Avenue to Birchmount Road.

“I’m really not sure if 50 kilometres an hour is the appropriate speed along that section of the road anymore,” Currie said.

Seven per cent of all collisions in 41 Division over a three-year period occurred in the Birch Cliff-Cliffside area, according to TPS.

However, 41 Division Sgt. David Liska said 11 per cent of the division’s enforcement was dedicated to the area.

“There is a significant amount of enforcement that goes on here,” he said.

In addition, the ‘freeway’ from Midland Avenue to Brimley is out of control. There is a continuous line of speeding traffic and red light runners at Chine Drive which is a school zone. I contacted the police twice by email about this and never received a response.

Birchcliff residents are many of the thousands of drivers who speed along Lakeshore, Woodbine and Kingston Road through the Beach on their daily commutes, routinely exceeding the posted speed limit by 20-30 kph. But they want everyone to slow down through their neighbourhood. I’d be on board if they were advocating for speed enforcement (not photo radar) throughout the city, not just in their neighbourhood.

Joe, out of curiosity, why are you not interested in photo radar as part of speed enforcement?

Photo radar is a tax grab and won’t result in any changes. To get people to slow down, there need to be serious consequences, including demerit points and insurance rate increases. Photo radar accomplishes none of that, IMO.

Funny but I used to live on Kingston Road just west of Woodbine and in 2015 I made a similar request to the city and also requested transportation services look at redirecting of truck traffic away from that stretch of Kingston due to the amount of homes along that stretch as well as the geography. The transportation office pretty much laughed at me and told me it could take up to 10 years to look at it and besides because it was a highway that I should expect it because the property values are lower – REALLY??? In the end I guess all it takes is for someone to get killed for the city to do something. Kingston road is so dangerous for the surrounding residents because curves from Eastern and continues to follow that path all the way to Vic Park making for a lot of blind spots on the road. I was terrified to let my son play outside of the house and was nearly run over a few times stopping in front of my own home. I would often have put my hazards on a few blocks down when approaching my home and would still have cars honking at me for legally parking in front of my own residence – most of those people likely from Durham (people who don’t even contribute taxes to our city). With the crazy amount of condos going up I really hope the city addresses the entire stretch of Kingston within the city of Toronto because its a problem and likely one that will result in a lot more deaths.