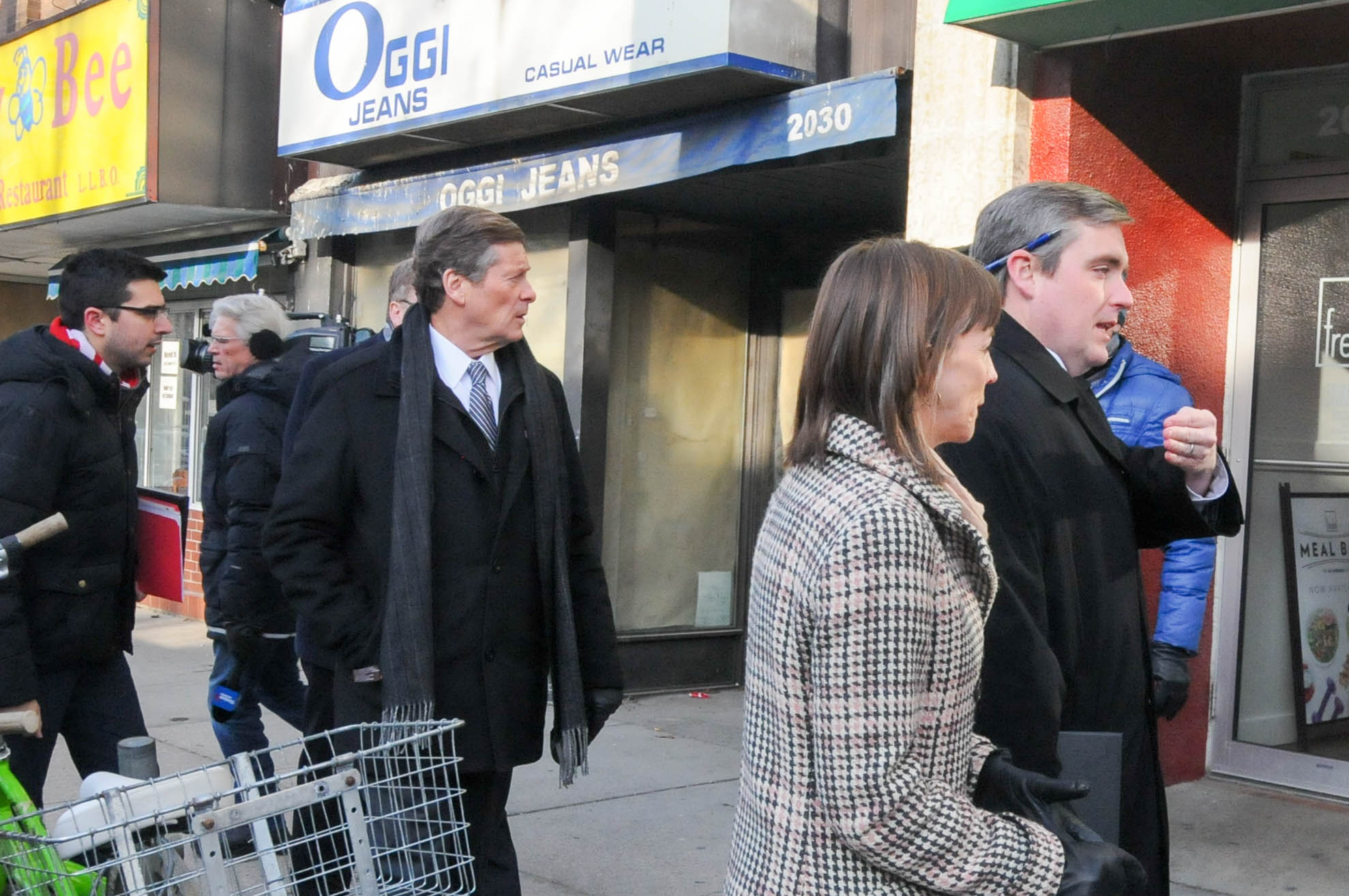 Toronto Mayor John Tory says a plan to axe a rebate for vacant storefronts is being phased in over a two-year period.

The mayor provided this timeline at the annual Beaches-East York New Year’s Levee, which took place Jan. 13 at the Firkin on Danforth, almost a year to the day he first unveiled the plans during a media event near Kew Gardens.

“It’s a phase-in, and that was at the request of people who have been receiving it, some of whom are, you know, I’m sure bona fide recipients that are in transition with their lands, so I think it was reasonable to phase it out,” Tory explained.

Toronto’s Vacant Commercial and Industrial Unit Tax Rebate Program, introduced in 2001, lets landowners apply for a 30-per-cent rebate if their commercial properties are fully or partially vacant for 90 days. Owners of industrial lands can get a tax rebate of 35 per cent under the program, which was created under direction from the province.

“The rebate program was introduced by the Province to recognize that commercial and industrial properties that are fully or partially vacant will have reduced income streams as a result of the vacancy, while their assessed value (and property taxes) are based on their ability to generate income. Vacancy rebates partially offset an owner’s temporary loss of income due to vacancy,” a city spokesperson said in an email.

Critics of the program have argued that it incents landlords to keep storefronts empty. MPP Potts said he met with BIAs on Queen Street and the Danforth and that they said the rebate “is contributing to landlords not renting.” He added, “It makes it hard for pop-up shops.”

In order to nix the rebate, the city needed provincial approval. The city received word of this on Dec. 21, 2017, according to a spokesperson.

Potts said he worked with the minister of finance to let municipalities throughout the province opt out of offering these rebates. He is not aware of any other municipalities that have put in similar requests, he said.

The commercial and industrial rebates will be discontinued effective July 1 this year.

Land owners can still apply for rebates related to vacancies that took place in 2017 until Feb. 28.

Approved applications for commercial properties will receive a 15-per-cent rebate for the period from July 1, 2017 to June 30 this year, while still receiving the full rebate for the first six months of last year. The industrial rebate will remain unchanged until it is scraped with the entire program this summer.

According to estimates, getting rid of the commercial rebate could save the city $22 million annually, but Tory said that was not the motivation for doing so.

“This is not about us trying to save money. It’s a genuine belief we had that this was not a healthy situation for retail and that frankly a lot of the money was going to great big downtown buildings that had empty space, and that wasn’t really the intention of the program to begin with,” Tory said.

Once the city no longer offers the rebate, Tory suggested the money saved could go towards helping small businesses — but exactly how that would work has not been decided. “That remains a matter that’s under consideration,” he said.

It was only a few years ago that Queen Street won the “Best Main Street in Ontario” Award. What happened to it?

“incents” is not a word.

Is incentive a word?

The elimination of the commercial property vacancy tax rebate began and was pushed by several key players in the east-end, something I saw up close from my position as Director of Research & Public Policy at WoodGreen Commuity Services : First, DECA, the Danforth East Community Association, flagged the problem of offering rebates to landlords who leave their buildings empty, often for years. Then, through a grant from Metcalf Foundation, WoodGreen’s Renew Commercial Districts program (a.k.a. the Pop-Up Shops project) worked with local city councillors, Mary Fragedakis, Mary Margaret McMahon, and Janet Davis (who championed this through the City’s committees) and, also, with provincial staff on the needed legislative changes.
This change will mean $9 million additional revenue this year and close to $20 million next year and should now be spent on poverty reduction and local economic development. We are all glad of this change, and credit should be rightly shared where it is due.