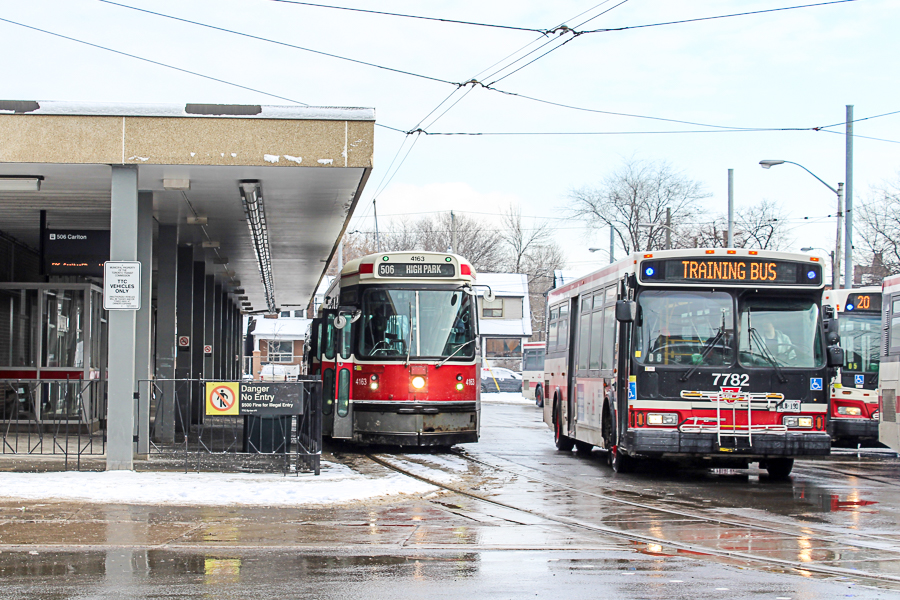 A TTC training bus leaves Main Street Station on Jan. 16. The TTC is temporarily replacing the streetcars with buses on the 506 route beginning next month. PHOTO: Anna Killen

The TTC is temporarily putting the brakes on streetcar service along the 505 Dundas and 506 Carlton routes.

The 506 loops between Main Station in the east and High Park in the west, while the 505 runs from Dundas Station to as far east as Broadview Station.

Starting Feb. 19, the transit commission will be temporarily replacing streetcars on the two routes with bus service. Buses will serve the routes for the rest of the year.

TTC spokesperson Stuart Green said the move is a result of planned construction as well as the limited availability of streetcars.

“A lot of the work that’s happening is track work, so obviously we can’t run streetcars across track work. It just made more sense to do a complete conversion for the balance of the year,” Green said.

“The fleet issue, it really arises because we have scheduled maintenance for the older streetcar fleet to keep them on the road longer due to the Bombardier delays,” Green explained.

The TTC’s deal with Bombardier for new articulated Flexity Outlook streetcars has been riddled with delays as the manufacturer has failed to meet supply targets on time.

However, by using more buses than the number of streetcars that have been operating along the two routes, Green said the TTC will be able to move the same number of people.

“Because there are more vehicles on the route [with buses], wait times will actually be shorter, in the peak hours, anyway—you’ll probably see more frequent service,” he added.

The streetcars from the 505 and 506 routes will be used to run along the 511 Bathurst route.

Putting the “brakes” not “breaks.” One avoids crashes, the other invariably involves them.