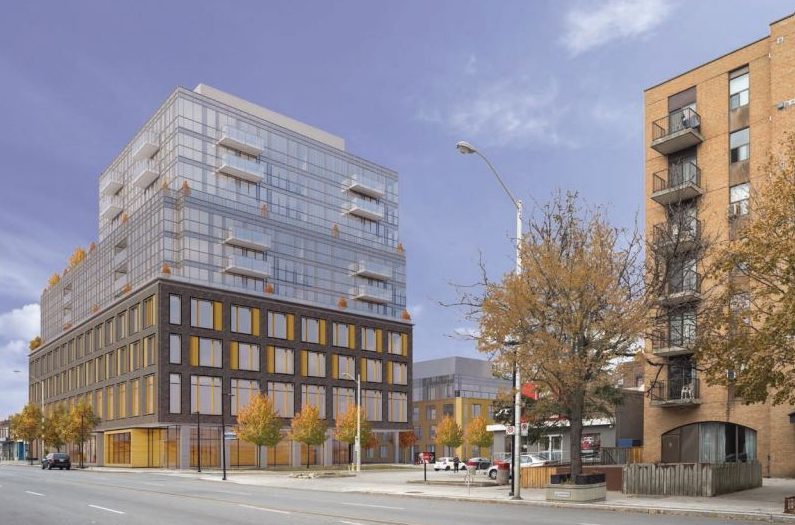 Looking northwest towards the site from Danforth Ave. PHOTO: Sweeny and Co.

The city has received a development application for the Shoppers site at 2494 Danforth Ave., just west of Main Street.

Tawse Realco Inc. is proposing a mid-rise retirement home fronting Danforth with retail on the first two floors as well as a separate low-rise rental apartment building that would be located behind it.

“The site is well suited to absorb increased density while maintaining compatibility with the surrounding mixed-use and neighbourhood areas,” according to paperwork that was prepared by development consulting firm Urban Strategies Inc. on behalf of the landowner and submitted to the city last month.

The 10-storey retirement home would encompass 140 rooms, including 50 assisted living and memory care dwellings, as well as amenities such as a fireplace lounge, pub/bistro/game room, dining room, spa, theatre/chapel, green roof, exercise room, libraries, outdoor terraces and a country kitchen, according to the application.

A standalone four-storey apartment building on the north side of the site would offer 20 rental units, including an even split of one- and two-bedroom suites.

“The four-storey apartment will maintain the residential feel of the neighbourhood with articulated design features, appropriate front and side setbacks and a main entrance along Harries Avenue aligns with the adjacent semi-detached house,” as per the document.

The site would contain 74 parking spaces.

A preliminary staff report to community council is expected sometime between February and April and a community consultation will be held shortly thereafter, the city said.