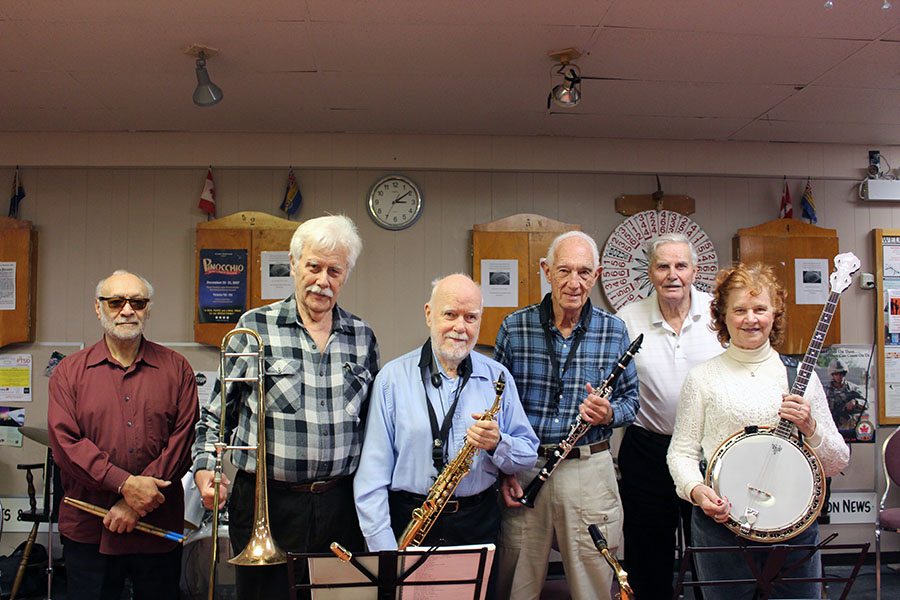 They didn’t notice each other at first, at least Anna Curley says they didn’t. The Beacher who moved from Scotland to Toronto in 1956 had been coming out to see Paul Hallam’s Dixieland jazz band perform at the Coxwell Legion for more than a year before the octogenarian clarinet player asked her out.

“He called me and said, ‘Would you like to go out to some music,’” said Curley. “I turned him down a couple of times, and he kept trying and then I went out with him and he turned out to be really really nice guy.”

The two have been dating for more than a year now and their Golden Years courtship is what the Barons Bands’ weekly events in the legion’s basement are all about.

“It’s a social get-together,” said Hallam at a recent Tuesday afternoon show. “We’d like to have more dancers and, you know, kind of a human, fun time for adults—for retired people, mostly,” he added.

He’s seen the band transform from legionnaires playing austere army songs to what a Barons Band flyer bills as “happy swingin’ jazz you can dance to.”

As older members left the band, which dates back to at least the ‘80s, the jazz musicians in the group got more sway, and now they’re trying to fill the floor every Tuesday from 1:30 to 3 p.m. at Baron Byng Beaches Branch 1/42 at 243 Coxwell Ave.

Curley, or “the lady with the red hair” as Hallam affectionately called his “gal,” was one of several dancers to take the floor of the legion on a recent Tuesday.

A pair of couples shuffled across the dancefloor, and the band played through a set of familiar—to a certain generation, anyway—jazz standards such as “There Will Never Be Another You” and “‘Makin’ Whoopee.” Before breaking into the latter, Hallam quipped, “This one is dedicated to Whoopee Goldberg in her maiden days.”

Decades in, the lineup continues to evolve. Drummer, founding member, and legionnaire Gerry O’Connor died at age 87 this April, so Stan Wong has replaced him.

Sixty-one-year-old Robin Laing is the band’s youngest member, and he joined the Barons about 10 weeks ago. “I’m the junior here,” he laughed.

To Laing, the band is a good excuse to leave home. “If I didn’t play, I wouldn’t get out of the house,” the Ajax resident who drives all the way to the Beach each week said.

Banjoist Sally Carroll used to play Irish music, but it’s the Dixieland jazz sound of the Barons that got her on board with the group as the main banjo player a few years ago. “It’s just the music. This kind of music really drives you,” Carroll said after a gig.

The Barons’ final gig of the year is on Dec. 19. They’ll be back in the swing of things on Jan. 9, as Jan. 2, the month’s first Tuesday, is a tough commitment for Hallam.

“On New Year’s Day I’m gonna be at a party in London, so it’s gonna be pretty hard to put something together,” he said.

What a superb article: an example of Community journalism!! Congrats !!
Could you please put me in contact with the “Barons Band”?
I would like to try them in a possible performance .
Kind regards
Dr Fornazzari, from the “Brain and Music”Project at St Michael’s Hospital