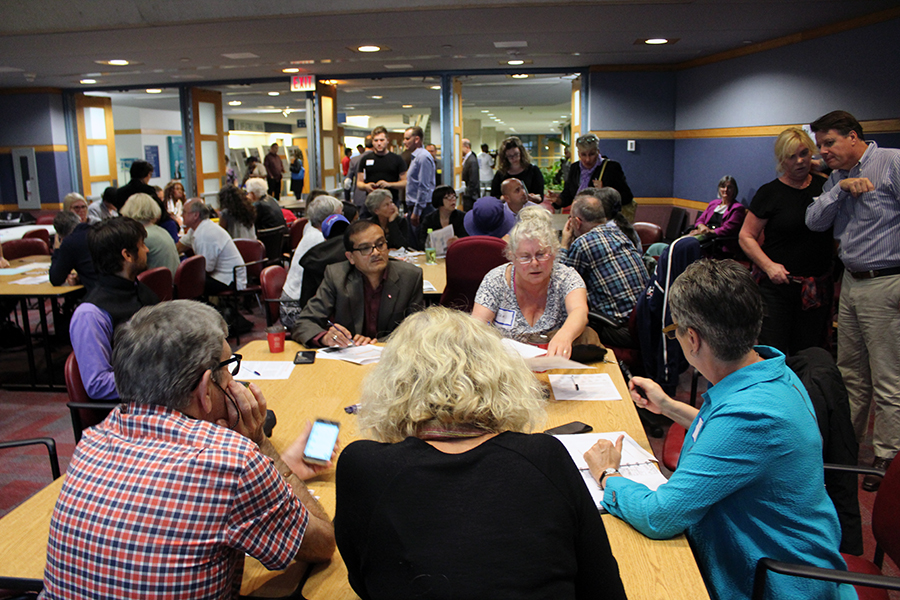 About 60 people attended a community meeting at East York Civic Centre on Oct. 10, 2017, to discuss where a police station that will house the amalgamated 54 and 55 Divisions should be located. PHOTO: Josh Sherman

The site selection process for an amalgamated 55 and 54 Division police station has been delayed as city staff mulls community feedback.

A report to executive committee will now take place on Jan. 24, 2018, instead of the originally scheduled Nov. 29 date “to allow more time for the project team to consider and respond to community feedback,” according to an email statement forwarded by city spokesperson Natasha Hinds Fitzsimmins.

The city narrowed down a list of approximately 550 potential sites for a station to house the amalgamated division before beginning public consultations this past October.

The three final sites were East York Civic Centre at 850 Coxwell Ave., the TTC garage at 1627 Danforth Ave., and the existing 55 Division headquarters at 101 Coxwell Ave.

Toronto Police Services outlined specific criteria to the city’s real estate services division that any police station site would need to offer, including room for a 50,000-square-foot building with a footprint of 25,000 square feet.

Brad Bradford, a board member of the Danforth East Community Association, a group that has been engaging with the city during the consultation process, said a letter the group sent the city triggered the delay.

“We want to kind of pump the brakes and just have a chance to consider the process and the evaluation framework and how we got to where we are,” he said.

The community has long eyed the TTC garage at Coxwell and Danforth as a possible community hub, Bradford noted.

Some in the community have suggested another site could be viable and spare the Coxwell and Danforth site.

As Beach Metro columnist Steve Wickens recently reported, the Greenwood subway yard had been shortlisted before the city settled on the three sites it first presented to the community this autumn.

The site was reported to have foundations for potential future developments above the 31-acre yard installed in the 1960s, and Wickens suggested the site should be “thoroughly explored and explained” as a result.

But the city said it wasn’t clear if the foundations were in place, and even if they could hypothetically support additional storeys, they may not meet contemporary building standards.

“There could have been changes in the last 50 years including wear and tear on existing structures, assumptions made given weight/structural components required or weakened over time, geotechnical considerations, [and] additional venting or safety considerations now required,” said the city in an email statement.

The city said it looked at the potential for development on the TTC staff parking lot and outdoor storage areas, but that the site didn’t meet TPS criteria. It lacked multiple entry points, for example.

“To study the yard to determine if additional buildings or storeys could be accommodated would come at considerable time and expense. However, that does not preclude studying the yard for other City building projects,” the city said. “City staff are not aware of any potential to develop over the tracks at Greenwood Yard.”

Gerry Dunn, a DECA visioning committee member and founder of the Danforth Village Community Association, also wanted more information about the Greenwood site and, like Wickens, wants it studied as an option.

“The question of fiscal responsibility seems to come into play here,” said Dunn. “How much could they be saving if they used that site?”

TPS has a budget of $37.3 million for design and construction.

The tentative occupancy date for the new site is 2024, but that is subject to change based on which site is approved by council.

I am hoping that the station remains in the 55 division lot where it currently is at Coxwell and Dundas streets…. if they relocate it I will probably sell and move! I always felt safe having the police near by!