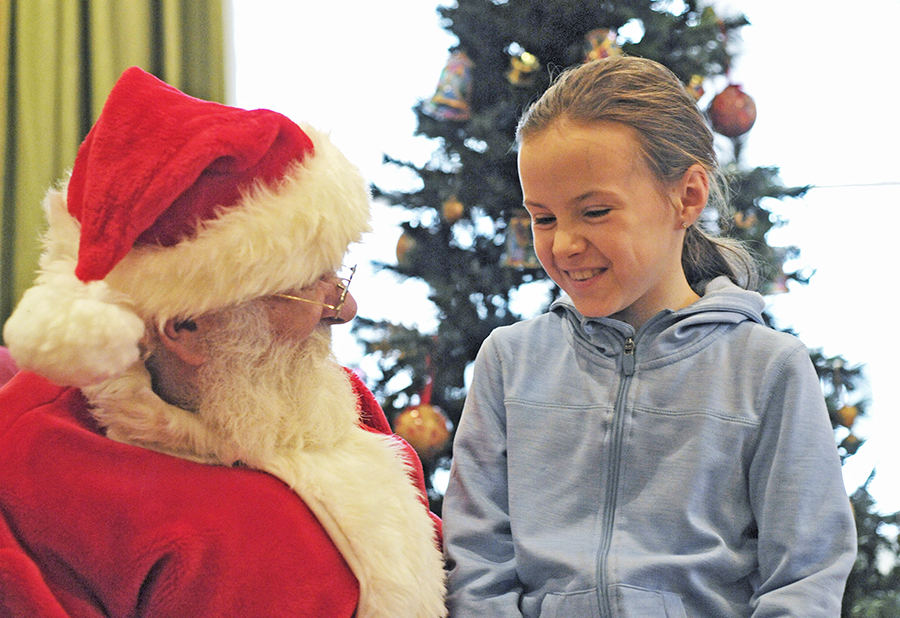 It all began about 12 years ago. My Rotary Club had renovated the interior of the Gardener’s Cottage in Kew Gardens. The last head gardener had moved out a few years before and the place was falling into disrepair, both inside and out.

As our Centennial Project (Rotary International was founded in 1905), the Rotary Club of Toronto Beach, with the agreement of the City, started to raise the necessary funds and materials to restore the interior rooms. With the volunteered assistance of local interior designers and construction people, the project was accomplished. But that’s another story.

We thought about asking the City if we could use the Cottage for our regular Tuesday breakfast meetings, but we decided it was too small for our Club, at that time.

However, someone had the brilliant idea that we should hold a “Santa at the Cottage” day in December. Thankfully, the City agreed and gave us the necessary permit. The idea was to offer a non-commercial event for families in the Beach, where the little ones could meet the whiskered Old Man, whisper their Christmas wishes and let their parents take their own photographs.

Amazingly, without any suggestion on our part, a number of folks donated canned and dried goods as well as a few dollars. This has now become a tradition. Last year we collected about 350 lbs of goods which were given to Community Centre 55 to add to their annual “Share a Christmas” campaign, and lots of dollars to our Charitable Fund.

Of course the Old Man has to be whiskered. As it happens I sport a full, now white, beard, so the lot fell on me to play the role! In late September every year now, I stop trimming my beard, and by Christmastime it bears a fair resemblance to the character Coca-Cola made popular.

One of our Rotarians was a senior manager at the City at the time, and was able to borrow a Santa suit for me to wear. In those days, I was still fairly slim, so a little padding was required for the authentic look. I now own my Santa suit (and don’t need the padding).

It is amazing what the kiddies will tell Santa. I will never forget the little lad, probably six years old, who whispered, “I want Peace in the World.” Wow! Sometimes Santa doesn’t really understand what they are saying. Fortunately, Père Noël also understands and speaks French!

A couple of years ago at the time of “Santa at the Cottage”, I knew that good friends of ours were away on a cruise in the Mediterranean, and that they were coming home on the next Monday. On The Day, one of my young guests was their grandson. After the usual discussion about Christmas wishes, I asked young Joshua whether he was excited that Grandma and Grandpa were coming home on Monday. A look of astonishment came over his face.

He jumped off my knee, ran to his Mom, shouting, “It’s the REAL Santa!! He knows Grandma and Grandpa are coming home on Monday!”

In the last three years I have taken on the role at the Ashbridge’s Bay Yacht Club’s annual Children’s Christmas Party, which is another fun event. On this occasion the Metro Toronto Police Marine Unit send a patrol boat which picks Santa up at the Club’s gas dock in Coatsworth Cut and brings him round into the Club harbour. The kids love it when they spot Santa on board the launch, with its klaxon blaring.

The story is told that, during a Kindergarten Christmas project, the teacher asked what colour Santa’s sleigh was. The consensus, of course, was that it was red. “No, it’s not,” objected one little lad who had been to the ABYC party. “It’s white and blue, and it’s a boat! I’ve seen it!”

A week or two ago Santa received an email, via the Rotary Club, from a Mother whose daughter was very upset as she would not be able to go to the Gardener’s Cottage (Saturday, Dec. 9 from 11 a.m. to 3 p.m.) as the family had other arrangements that day. The young lady, now 10 years old, had been visiting Santa at the Cottage for the last 7 years! Mother and daughter were thrilled that Santa replied and was able to suggest alternative dates, like the next day, Dec. 10 at Ashbridge’s Bay Yacht Club.

Santa’s other appearance is at the St. Aidan’s Church Christmas Day lunch for the needy and sometimes at the church’s Out of the Cold (OOTC) evening closest to the 25th. A few years ago I wasn’t able to do the OOTC appearance, so the husband of our interim priest, a retired Anglican Bishop, borrowed my outfit and did the honours. He told me afterwards that if he had known about the power of the Santa suit he would have encouraged his dioceses’ priests to try it. It is amazing, he told me, what grown men and women will tell you when you are anonymous, as Santa!

Being Santa is exhausting but fantastically exhilarating. As I enter my eightieth year I wonder how long I will be able to continue, but I do hope to carry on for a few more years, the little ones bring so much hope and joy.

But on Dec. 27 I have an appointment with my barber!

This story was submitted to Beach Metro by Barry Webster, who has been the local Rotary Club Santa for 18 years.

Cheers and a very merry Christmas to you, Santa Barry. Lovely article!