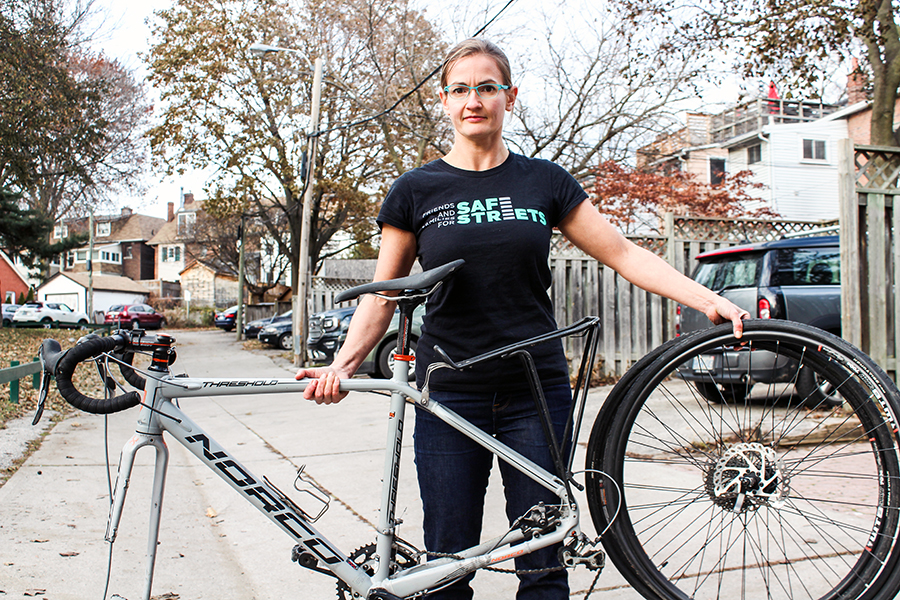 Jess Spieker holds up the bicycle she was riding when a motorist struck her on her way to work in 2015. PHOTO: Josh Sherman

Beacher and cycling advocate Jess Spieker celebrates a unique anniversary every year: May 20, the day she was nearly killed in a cycling crash in 2015.

“I have a ‘crash-iversary’ party every year, and every year I go for a hundred kilometre [bike] ride, and I pay for it dearly the next day because my back does not like that and my knee does not like that but [it’s] just my way to hold up my middle finger to the whole experience,” said Spieker, a personal trainer.

The back and knee pain are lingering effects from the collision she says nearly claimed her life two years ago.

She had been biking northbound to work when a motorist struck her at Bathurst Street and Shallmar Boulevard, sending her flying and leaving her with a broken spine, moderate traumatic brain injury, and soft tissue damage. The latter would result in a blood clot passing through her heart.

“If the crash itself had happened to somebody who was less strong or to a senior citizen or to any cyclist who doesn’t wear a helmet … [they’d be] dead,” she said. “Dead.”

Her annual ritual in May is one way she has coped with the aftermath of the crash, but there is another that just celebrated an anniversary of its own.

The avid cyclist has found support from advocacy group Friends and Families for Safe Streets, a support group for victims of road violence and anyone grieving the death of a loved one related to road violence.

The group, a year old as of October, holds monthly meetings where attendees can share their stories with others who have had similar experiences.

“That was super helpful to just connect with other people who understand and are going through it themselves,” she said. “It’s really valuable,” said Spieker, who is advocating for the recently tabled Bill 158, Protecting Vulnerable Road Users Act.

The NDP-backed bill would amend the Highway Traffic Act to include mandatory community service and a driving instruction course for drivers found guilty of causing injury or death to pedestrians and cyclists, among other measures.

David Stark, the co-founder of Friends and Families for Safe Streets, knows intimately how a cycling crash can change lives forever.

“My wife was killed by a careless driver in November of 2014, and I had to deal with a lot of things,” he said. “I sought out support groups… but I thought there must be some group out there that caters to the needs of bereaved family members and survivors of traffic collisions, and there wasn’t one.”

“The timing was right, and there is clearly a need there to establish a group that would be focused on advocating for better laws and street design to protect vulnerable road users and offering a monthly support group,” Stark, also the co-facilitator of the support group, said.

The group’s last meeting was Oct. 19 at Metro Hall. It meets the third Sunday of every month, but no activity is planned for December, and Stark said future gatherings will be posted to Facebook at www.facebook.com/ffsafestreets/.

Stark said organizers are currently scouting out a new meeting location that will be a more inviting environment for talks, which include moral support but also practical matters like legal advice and pointers for how to deal with insurance companies.

Co-founder Briegmann-Samson, whose husband was killed in a hit-and-run incident five years ago, said “this group really fills a big void.”

“People who have had somebody killed in a crash need support, they really do, they shouldn’t be going through this alone.”