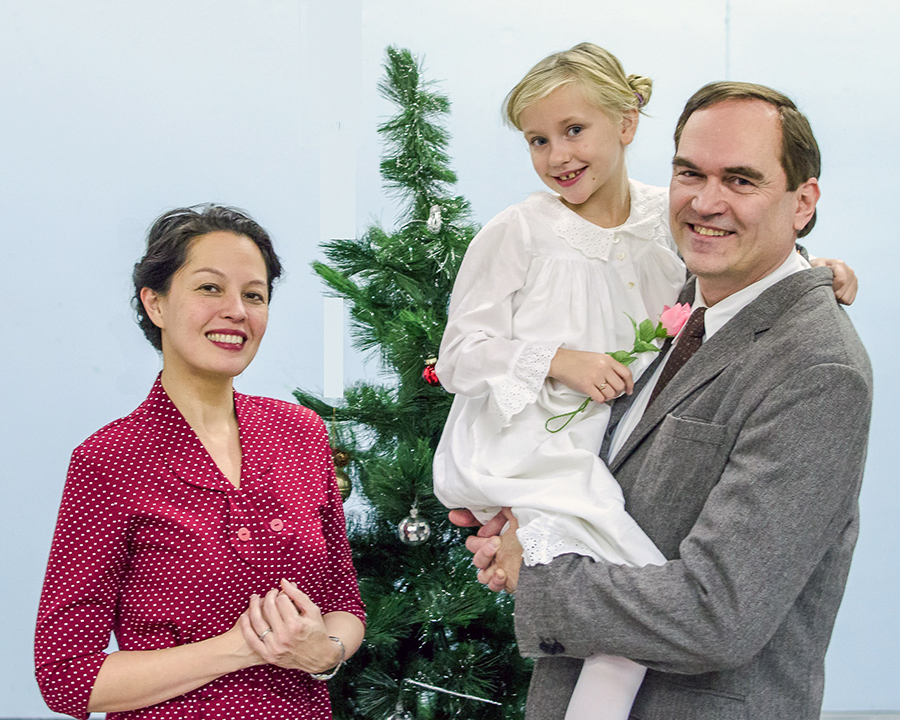 The Scarborough Players production of Frank Capra’s 1946 film, adapted by Doug Rand, is directed by Lorraine Kimsa. The stage adaptation stays true to the critically-acclaimed film which follows the love story of George and Mary Bailey during a moment of crisis for George on Christmas Eve. George is helped by a guardian angel, Clarence, who shows him the meaningful ways he’s helped his community of Bedford Falls.

A Christmas in New Orleans themed Jazz and Reflection takes place Dec. 2 from 4:40 to 5:25 p.m. at Beach United Church, 140 Wineva Ave. with the Xcentric Jazz Band joined by a couple of familiar faces.

With a swinging smooth sound and sense of New Orleans style, the Xcentric Jazz Band plays traditional and Dixieland jazz throughout the Durham region. They have performed at the CNE, the Oshawa and Port Hope Jazz festivals, “Jazz for Jesus” concerts for several different United Churches in Oshawa and the Beach as well as many park concerts and garden parties.

Founded in 1996, the current ensemble features Ron Hamblin on clarinet, Kevin Cook on trombone, and Dave Hubbell on trumpet. Ron’s fondness of Dixieland shines through on both clarinet and tenor saxophone. Kevin is a freelance singer and trombone player, a music teacher and cruise ship musician. Dave confesses a lifelong obsession with jazz music. For more than 40 years he has played in concert, swing, and Dixieland bands.

They will be joined by Brian Stevens on piano and Bill MacLean on vocals. The musical offerings will include traditional carols and Christmas standards with a dash of New Orleans Spice to swing everyone into the Christmas spirit.

Recorded with her partner – on stage and in love – Carson Ritcey-Thorpe at his family’s farm outside of Hamilton during the summer of 2017, Piper and Carson is produced by Chris Bartos. The album is decidedly more folk than Hayes’ previous releases, a welcome and not unexpected outcome considering her time spent touring and performing with various folk artists.

On Saturday, Dec. 9 at 4:30 p.m., as part of the Christmas Jazz Vespers program at Hope United Church, 2550 Danforth Ave., Bill MacLean (vocals), Mike Lalonde (bass), and Brian Stevens (piano) will present music from 12 Songs for Christmas. This concert will also feature the launch of Christmas Reflections, a collection of carols and original compositions with Stevens at the piano.

From a stark and soulful rendition of “There’s a Star in the East” to a joyful gospel, rock interpretation of “O Come All Ye Faithful”, the spirit of Christmas will be in full swing. Admission is by free will offering.

Over the years, founding artistic director Mervin William Fick has, with the support of the community and choir, transformed TBC into an inspirational non-profit that presents a popular concert series while supporting community initiatives like the Hamper’s Santa Claus Parade and the Riverside tree lighting.

The concerts, each with a professional orchestra and guest soloists, showcase predominantly classical music, but have been known to venture into more modern territory.

The first performance of the season is G.F. Handel’s Messiah on Sunday, Dec. 10 at 7:30 p.m. One of Handel’s best-known and most-performed works, it’s a perfect fit for the holiday season.

On Good Friday, March 30, the choir presents Mozart’s Great Mass in C Minor, and on April 29, take in Beethoven’s Fantasia for Piano, Choir and Orchestra.

All concerts are at the Kingston Road United Church, 975 Kingston Rd., with tickets available through www.torontobeachchorale.com, through a choir member or in cash at the door.