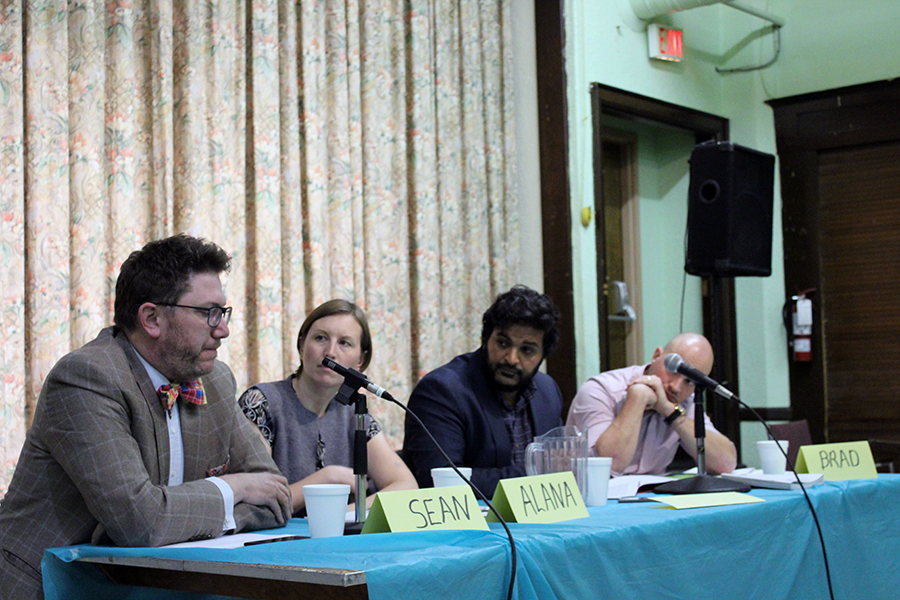 By a show of hands early on, it was clear nearly all 25 attendees at the Talking About Planning panel at Hope United Church on Nov. 22 had been to a planning meeting and of them, several had been left scratching their heads.

“Perfect. You are in the right place tonight,” said Beach Metro editor Anna Killen, who was moderating the talk, which the hosting Danforth Village Community Association (DVCA) held to help locals take a more active role in the often jargon-heavy city planning process.

“The purpose, just to be clear, is that we’re going to talk about the process of planning, and terms, and all the things that we need to know in order to participate in planning discussions,” explained Gerry Dunn, founder of the community group, during opening remarks.

Attendees received a glossary of urban planning terms, and the four panelists added to the vernacular during the two-hour discussion and drilled down into terms such as as-of-right.

“As-of-right means that I can draw up some drawings and I can give them to the city and the city will give me a building permit and I can go ahead and build it and I don’t need to amend the zoning in any way,” said panelist Phil Pothen, a land-use planning lawyer.

Sean Galbraith, a land-use planner, explained the concept further. “You’re conforming with the zoning by-law,” he said. “The city says, ‘This is what you can build and you don’t have to ask us permission for anything,’” he explained, adding, “Now, that’s extremely hard to do in a lot of cases.”

Because zoning by-laws have changed over the years, Toronto could not be rebuilt today as it stands, he said.

The panelists also explained how outdated zoning by-laws take the back seat to provincial policies in areas the Ontario government has identified as places for more development, such as transit hubs like Main and Danforth.

“Unfortunately, a lot of these developments are going to happen, so it’s more about collaborating,” said Alana Young, an architect with Design Workshop Architects Inc.

She was addressing comments from an attendee who was concerned about an eight-storey development on a low-rise stretch of Kingston Road.

Instead of attempting to deter development in areas poised for growth, Young recommended residents focus on specific elements that they can have a meaningful impact in shaping, both architectural and otherwise.

“You can push harder about the green space, the landscape, the trees, or open space that they’re required to have… or the types of uses,” Young added.

The representative from the City of Toronto, Brad Bradford, explained how the planning department fits into the development approvals process.

The planning department looks “at a broader picture,” including provincial policy, such as the Places to Grow Act, he added.

This was a shock to Ward 32 resident Diane Gordon, also a board member of DVCA.

“I always thought that the public interest was about the public,” she said, noting that for her, the public has always meant the community in which a new development takes place. “I’d just like them (planners) to know that the public notices and the public assumes that their concern will be for the person, the public person.”