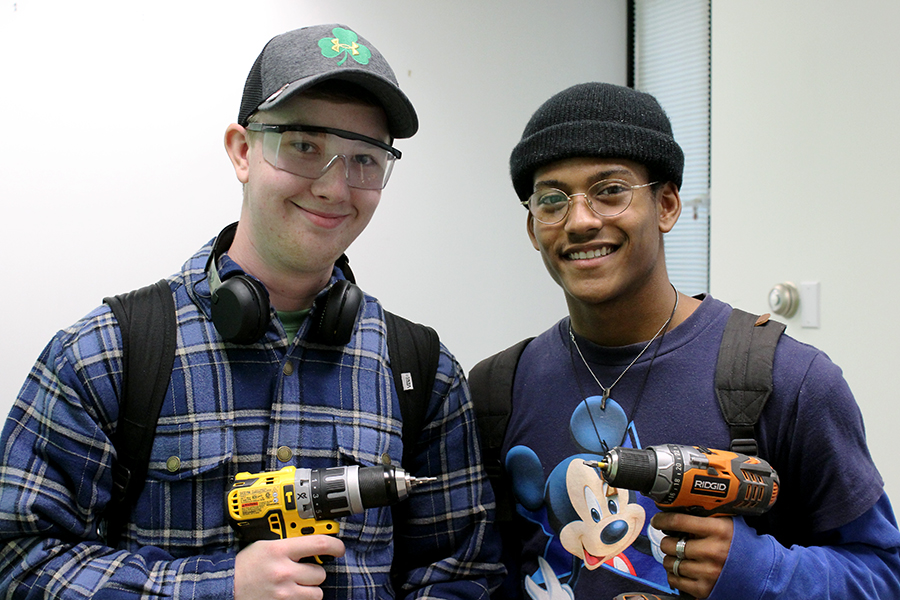 John Scalpello, the school’s technology department head, said the day is meant to show the boys that there are paths to well-paying jobs that don’t involve university—namely, the trades.

“There are occupations where there is going to be a lot of jobs in the future,” said Scalpello, who has 17 years of teaching under his belt.

“Most people in the trades are my age, in the 50s,” he explained. “There’s gonna probably be a hundred thousand places for people to work in the future.”

Nicole Ross, a Neil McNeil tech teacher in her first year at the school, said often students who are interested in the trades go a job fair and are left bored. “So, we’re like OK, let’s find another way to engage you and let you see what it’s about,” she said.

During the all-day event on Oct. 30, students worked on eight wooden benches that will be donated to elementary schools through a “buddy bench” initiative.

Kevon Nieven, 16, was one of about 60 Neil McNeil students to participate. The Grade 12 student said he wants to pursue music and photography and “isn’t sure” about going into the trades.

It was the opportunity to help build a bench for his old elementary school, St. John, that appealed to him. “That’s why I thought it’d be pretty cool to do this,” he said.

He walked away with an appreciation for the trade. “What stood out most is the precision of using the tools and what could go wrong. If you just make a small mistake in measurements, it can affect the entire outcome of the whole project,” said Nieven.

Clayton Moskalyk was one of the carpenters who provided lessons. He said he volunteered because he was interested in “giving back to the kids.”

Moskalyk also wanted to show them “what else is out there” in terms of jobs, and spoke of the importance of the trade in general.

“Everything in this world revolves around carpentry,” said Moskalyk. “From the time you’re born—you need hospital—to the coffin you die in, [it’s] all related to carpentry.”

The expo built on the school’s Specialized High Skills Major (SHSM) program, which teaches students about tech design and construction, preparing them for possible careers in those industries.

“Many schools don’t even have shops anymore. This is something that over the year has been diminishing and closing down,” said Scalpello.

SHSM programs are available at school boards across the province, focusing on a industries as varied as aerospace and tourism.

About half of the students taking part in the expo were enroled in Neil McNeil’s SHSM construction program.

“Ours (the program) is flourishing. We have full classes and the kids are right on task—they love it,” he added.