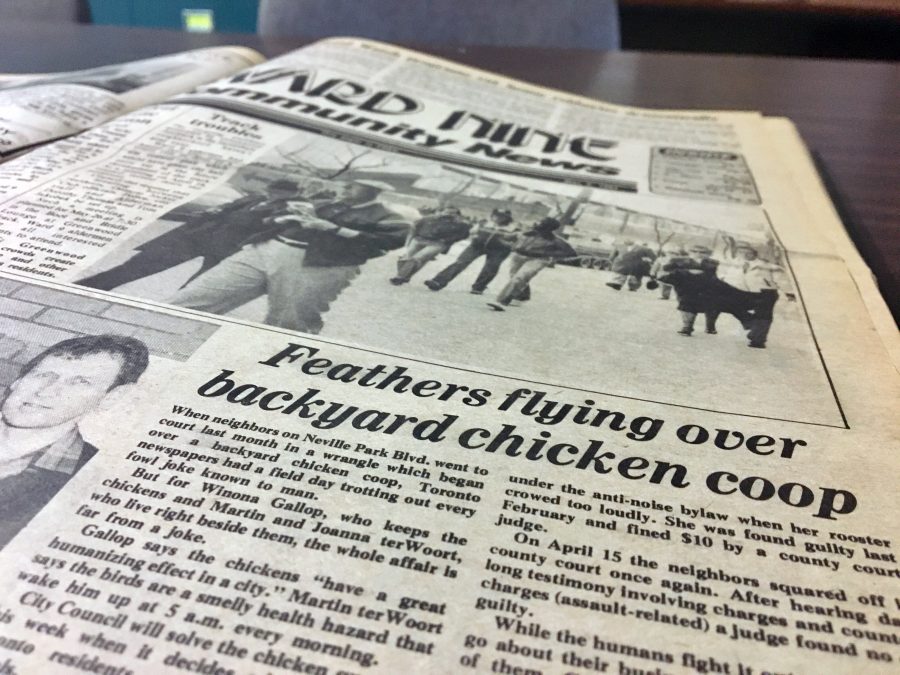 If you’ve spent any time thumbing through old newspapers – or if you’re one of the lucky ones to have been of reading age when they were fresh off the press – you know that many of today’s debates have already happened.

At a local level, fears over the commercialization of the Beach, backyard chicken coops, hey, even cyclists getting ‘doored’ by drivers – nearly 35 years ago, this paper covered all of these issues over the span of several weeks, and, lo and behold: we’re doing it again today.

“Bikers better beware of car doors opening,” reads the headline introducing a letter from Susan Lamb in the May 3, 1983 edition of Ward Nine Community News (now Beach Metro). She was sent sprawling into traffic on Queen Street after a car driver opened his door without looking and hit her as she was biking by. As someone who had been cycling in Toronto for 15 years, Lamb laments that she’d lately noticed drivers adopting a “laissez-faire” attitude toward the safety of cyclists. Say it again, Susan!

Plucked from that same issue: an article about the great chicken coop debate of 1983. A local activist called Winona Gallop kept chickens in her backyard and provided eggs to her family and friends (she hadn’t bought eggs in 10 years!). But her neighbours thought the fowl smelled, well, foul, and called the rooster an unwelcome alarm clock. They took Gallop to court, and fought her at city hall. After two rounds of debate in council chambers, the city voted to ban backyard chickens and they’ve been officially outlawed ever since. Until this month, that is, when council voted to allow a three-year backyard chicken pilot project in four wards, including our Ward 32, where the ban began. But don’t worry: you won’t be hearing any cock-a-doodle-doo’s. Roosters are still on the out.

Concerns about the commercialization of the waterfront parklands appear to be as old as the Beach itself, this despite the fact that there was once a waterfront amusement park in the area. Did you know that in the 1910’s, a group of residents opposed the proposal for the Kew Gardens library branch because they were worried about what it would mean for the area’s vast, mostly untouched parkland? While the library, thankfully, went ahead, we can thank some of those early protectionists for the natural beauty we still see in our neighbourhood today.

But back to 1983. Enter then-alderman Tom Jakobek, who penned an op-ed in these pages readying constituents for changes coming to the Beach. Invoking the golden rule, he wrote, “as the Beach becomes more commercial and less a place of our own … we must all share.” Residents would have to figure out how to accommodate more visitors while still retaining the character of the neighbourhood. “I for one believe that the Beach and boardwalk must remain a park and not a commercial strip,” he wrote, adding “it is going to be difficult for us to decide which changes are desirable and beneficial to the area as opposed to those which threaten the neighbourhood.”

This is a discussion that rings true today, albeit with added nuance. Queen Street businesses now crave more foot traffic (in 1983 the worry was that the neighbourhood would turn into the next Yorkville). And it’s near impossible to have a measured discussion about what types of visitor-inducing businesses or events residents would like to see along the waterfront because the city’s controversial lease deal with Tuggs taints and limits any conversation before it begins.

There are indications the city is attempting to reach the same type of balance that Jakobek called for in his 1983 op-ed – somewhere between inviting and preserving – but perhaps it is time for a broader conversation about the future of the eastern beaches waterfront parklands. With about 10 years left on the Tuggs lease, the city seems resigned to just ride it out. Maybe we can learn from the past and use the next decade as an opportunity for the community and the city, together, to openly prepare and figure out what those lands should be used for in the future.

Anna Killen is the editor of Beach Metro News.