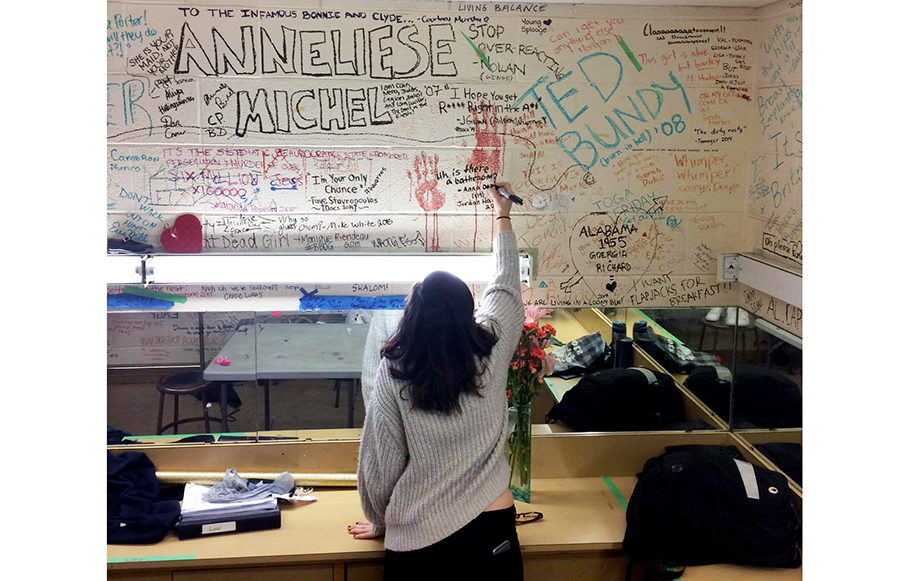 The curtain may be closing on a drama playing out at Malvern Collegiate Institute.

It wasn’t an act put on by the drama club, but past and present members play a leading role.

A student and alumnus effort to save a wall showcasing decades of drama students’ writings has not deterred the school’s principal from plans to erase it, Beach Metro News has learned.

The Toronto District School Board will slap a fresh coat of paint over the wall despite a petition asking Superintendent John Chasty to preserve the relic.

For decades, Grade 11 and 12 drama students had signed the drama office’s wall “to symbolize all the hard work that they put into the performances,” according to the change.org petition, which has drawn more than 1,100 signatures.

But the wall has recently gotten bad reviews. The school board said the principal’s move to repaint the wall was “due to offensive and inappropriate words written on the wall.”

The decision, the board said in a statement through TDSB spokesperson Ryan Bird, involved weighing efforts “to maintain the history, while at the same time, addressing the inappropriate and offensive comments and words.”

“We believe we’ve managed to do both,” the board said.

The board said the plan is to photograph the wall and “recreate it with the offensive remarks removed.”

Ben Loughton, a former Malvern drama student and one of those to start the petition, addressed concerns about the writings on the wall. He noted the importance of context.

“Every single thing that’s in that room is written on the walls because it’s said on the stage, so there’s always context behind everything,” he said, adding the students do at times censor themselves.

“If you don’t understand the background of these quotes, I guess you could see it as offensive. But you need to take it from the drama students perspective and understand that it has a story behind it, it has memories, it’s significant to everyone,” said Loughton, currently enrolled in communication studies at Wilfrid Laurier University.

Loughton, who called painting over the wall “ridiculous,” learned of the walls’ fate when a call from his girlfriend, Virginia Mullen, woke him up yesterday morning.

Mullen, a Grade 12 co-president of Malvern’s drama club, had been at the Oct. 12 meeting with the principal and a TDSB equity advisor. Nine other students joined her, including fellow co-president Sebastian Scoular-Stajic.

Scoular-Stajic said he and the other students “stormed out crying their eyes out” after the 45-minute meeting, the third of its kind.

“We’re a little upset that we don’t have a voice. They say they’re going to listen, but they didn’t listen whatsoever,” Scoular-Stajic added.

The board said the principal consulted with students and staff before deciding “to capture [the wall] in high resolution photos and recreate it with the offensive remarks removed.”

Then, repainting will begin.

The board does not have a time set for when this final act of will occur.

Loughton said he believes students will be able to sign the wall once again, following the repainting. Meantime, he said students are trying to figure out their next move.

As a past malvern student and Co-Prez of the Stage Crew, this really pulls on the heart and saddens me. The school board is not listening to their students. They are not realizing that this will in the end create more harm than good. I don’t understand why there can’t be a compromise. These signatures are hope, determination, history and the growth of the students. You can’t just easily recreate that from photographs.

This is much more than graffiti on a wall. What is being missed in this entire story is what the wall represents. It’s about an incredible drama program that makes all students feel included and accepted. It’s about being able to express yourself and being encouraged to express yourself. High school is a very difficult time for many and Mr. Erich Lehrer has touched so many lives and allowed these young people to feel safe and accepted. Many of the comments on the petition are about Mr. Lehrer, helping these students through very dark times. The wall is more than a wall; it is Mr. Lehrer and all he represents to his past, present and future students. He teaches with a passion that is rarely seen today. He listens to the students and lets them know they are important. He gives them a voice when many attempt to stifle them. Having two children that have attended Malvern they have both made it very clear that Erich Lehrer was and is an integral part of their high school life. The School Board needs to see beyond the wall and view it as the students do with young enthusiastic open eyes knowing what it actually means to these students.

I bought an old school desk from a collectors store. I bought it because the top was etched with the names of the students ( and I suppose others ) who attended that desk for years. I was going to cut down an old tree, but I couldn’t because two unknown-to-me lovers carved their signatures into it. The Malvern wall is similar. The wall is impregnated with the thoughts of its students and as long as you have crusty old school trustees and others not understanding this, well then, history/art is at risk. Surely the high-priced help can find an alternative. I can’t comment on the apparent offensive language that may be on the wall, but if it was offensive at the beginning then it could have been removed.

I come from generations of “military” guys. My own father an Admiral, but had “family” fighting in 1815 in Brussels around the small town “Waterloo”. One a Welsh gunner for the English and one an officer (and three sons) for Napoleon… Another guy, in Canadian parliament served as Minister of Militia leading into WW1. Anyway.

To quote American Benjamin Franklin, “Some people die at 25 and aren’t buried until 75”. (They go “brain dead”)

To quote from your article “For decades, Grade 11 and 12 drama students had signed the drama office’s wall “to symbolize all the hard work that they put into the performances,” according to the change.org petition, which has drawn more than 1,100 signatures.

… “hard work”… and what is “harder work” than LEARNING?

“But the wall has recently gotten bad reviews. The school board said the principal’s move to repaint the wall was “due to offensive and inappropriate words written on the wall.”

… and how many “bad reviews” from students?

“always context behind everything”… “Context”? Which changes over time and place… Would the Toronto District School Board propose to erase history???

“painting over the wall “ridiculous”… would the word PATHETIC suffice?

BTW. Another of my ancestors, as Chief Inspector for…

BTW. Another of my ancestors, as Chief Inspector for Toronto schools in the late 1800s invited a young lady teacher from St.John, NB to come to Toronto to help start a new training program from Germany… that the Germans called “Kinder Garten”. Sound familiar?

Were I “King of Canada” today, citizens would loose their right to vote in elections after age… 40-ish. The “future belongs to the young”. Yes? … and “bottom line”… what does one do to change the world (before they “give up the ghost”) as a “better place” for future generations. Yes?