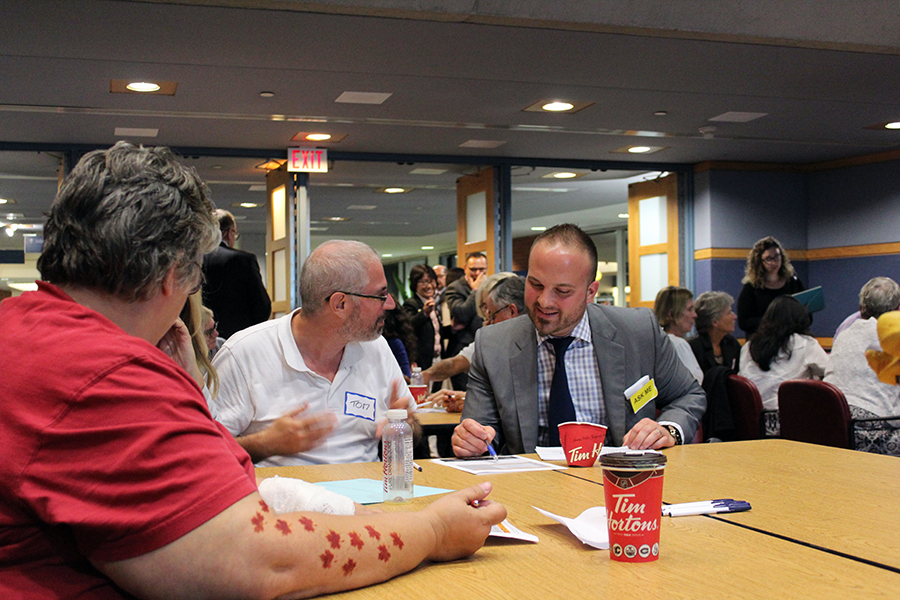 About 60 people attended a community meeting at East York Civic Centre on Oct. 10, 2017, to discuss where a police station that will house the amalgamated 54 and 55 Divisions should be located. PHOTO: Josh Sherman

With Toronto Police Services planning to amalgamate 54 and 55 Divisions, the city on Tuesday evening sought feedback on three possible sites it is considering to house an amalgamated division.

“We’re here to understand your vision for a modern police station and how the three sites might fit with it,” Yulia Pak, an associate at Swerhun Facilitation, the consultancy hired by the city to run the meeting, told about 60 who turned up at East York Civic Centre Oct. 10.

The three sites that have been selected for further study are East York Civic Centre at 850 Coxwell Ave., the TTC garage at 1627 Danforth Ave., and the 55 Division police station at 101 Coxwell Ave.

Enrico Pera, facilities management manager for TPS, said both divisions were identified in 1994 as being “in dire need of being replaced”—especially the latter.

“It is in [a] poor state of condition, we’ve maxed out the capacity on that facility as is, the locker rooms are cramped, the parking is maxed out, and the infrastructure in the area is actually degrading,” he said, noting that station’s back parking lot has been flooding during spring thawing.

The three sites shown on Tuesday were chosen based on specific criteria from TPS, including a request for a lot of about 1.5 acres that can support a 50,000-square-foot structure with 25,000 square feet on the ground floor.

Accessibility to transit and the potential for multiple entrances and exits for vehicles were some of the other factors real estate services examined.

“We want to get the community feedback prior to making any decision,” said Simos.

TPS has a budget of $37.3 million for design and construction.

The tentative occupancy date for the new site is 2024, but that is subject to change based on which site is approved by council.

At the meeting, residents asked to see the larger list of potential sites and expressed concerns over traffic from a relocated division.

Pancheta “Pat” Barnett, president of the East York Historical Society, said she preferred the TTC site for a new police station. “To me, it would be more centrally located on a main line,” she said.

“Plus, my summation [is] a lot of things go on around there, and this presence… would be ideal,” she explained, mentioning the number of bars in the area.

“To me it would be more appropriate and more helpful for the success of the neighbourhood,” Barnett, a Ward 26 resident, added.

Ward 31 councillor Janet Davis said she would hold off on supporting a site until further analysis was completed and she had received more feedback from constituents.

“I’m waiting to hear what the results of the consultation are, I also want to understand better the traffic and parking needs as well. We do need to understand what the TTC’s needs are for the site at Coxwell,” said Davis.