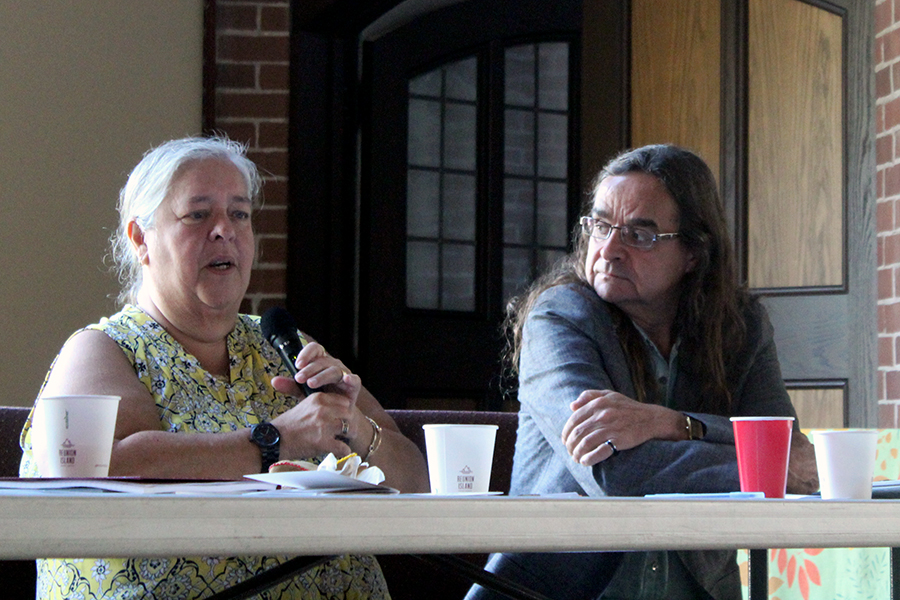 Sylvia Maracle, a recipient of the Order of Canada for her Indigenous advocacy, and Cat Criger, Aboriginal-in-Residence at the University of Toronto, at the Beach United Church Sept. 24. PHOTO: Josh Sherman

The Truth and Reconciliation Town Hall explored challenges facing Indigenous communities, such as continued water advisories on reserves and delays in the National Inquiry into Missing and Murdered Indigenous Women and Girls.

Beaches-East York MP Nathaniel Erskine-Smith, whose office organized the event, said he would submit the expert advice and concerns aired at the town hall to government ministers and continue to follow up on the files.

“Rather than having it be just a federal government representative making a sales pitch for how wonderful of a job we’re doing, we’ve brought in Indigenous voices who have long been involved in advocacy for their respective communities to tell it like it is and give an honest assessment of where we’re at,” he explained.

The event, which drew around 60 people, included four panellists: Sylvia Maracle, a recipient of the Order of Canada for her Indigenous advocacy; Cat Criger, Aboriginal-in-Residence at the University of Toronto, Mississauga; Andrea Chrisjohn, Board Designate of the Toronto Council Fire Native Cultural Centre; and Lindsay Kretschmer, the former Indigenous Affairs Officer for the City of Toronto.

During the two-hour-plus event, Maracle, who is the Ontario Federation of Indigenous Friendship Centres’ executive director, was critical of the Canadian government’s approach to a pillar of Prime Minister Justin Trudeau’s Liberal platform from the 2015 federal election.

“A murdered and missing indigenous women inquiry that moves forward on only looking at the law will not… give justice to the families who have lost these women,” said Maracle, suggesting lawyers are playing too much of a role in the process.

“We’re designing a process which continues to not have consultation,” she added.

The investigation suffered a major setback in July when Marilyn Poitras, a Métis professor at the University of Saskatchewan, resigned as commissioner.

What can be done to improve or replace the current bureaucracy tasked with handling Indigenous issues? Criger, the University of Toronto elder, had an idea.

The event was on the heels of a recent kitchi blanket exercise—an activity that teaches participants about Indigenous history and Canadian colonialism—at Ward 32’s East Lynn Park.

“It’s great for people to participate in the blanket exercise, which gives context for the historical mistreatment, but this is more about steps moving forward,” said Erskine-Smith Sunday.

Ward 32 resident Brad Bradford attended the blanket exercise and the town hall and said he came out to hear from those directly affected by the issues discussed.

“It’s all learning for me,” he said. “I guess the big takeaway was there’s been a lot of talking so far, and now we need to actually move towards action.”