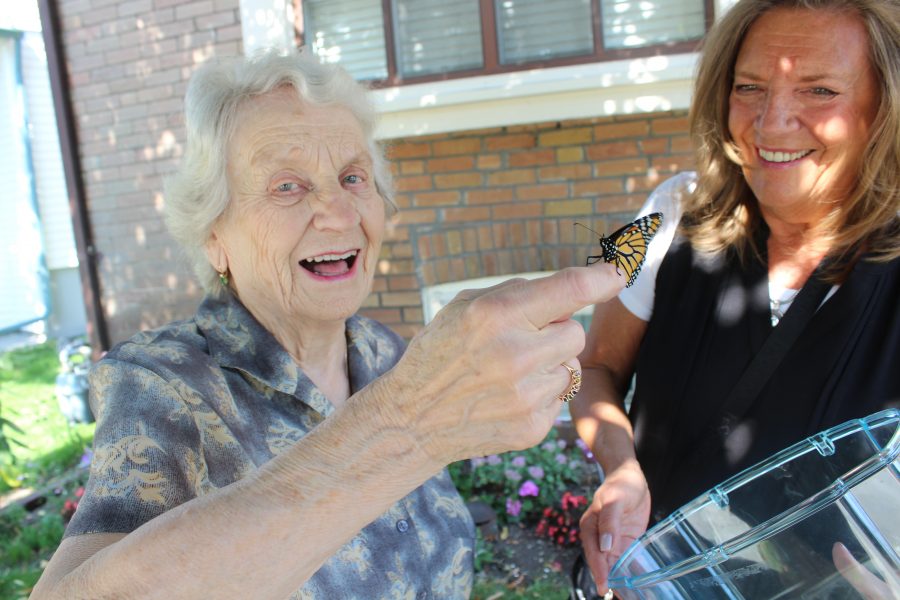 “Here’s your baby,” says Felice Strauss to her 91-year-old neighbour Olga Nazar, walking up the stairs to Nazar’s home on a recent Saturday.

In her hands, Strauss holds a modest-sized clear plastic container, the kind you’d use to carry insects or a small animal home from the pet store. Inside, hanging from the terrarium’s bright blue lid, is a j-shaped chrysalis in a brilliant green.

In less than 24 hours, a monarch butterfly will emerge from the cocoon, a butterfly that began its journey as a tiny white blob on the back of a milkweed leaf planted in Nazar’s front yard.

“That’s amazing,” says Nazar, peering down to get a closer look. “I’ve never seen the process.”

Until last year, Strauss hadn’t seen the process either. But encouragement from a friend and a keen environmentalist daughter made her a quick study. She’s spent this summer collecting monarch eggs from milkweed plants, nurturing them at her home near Coxwell and Dundas, and releasing them out into the wild. In good humour, she calls them her “births”, and she’s birthed about 35 this year — her daughter is close behind with 25. It’s part of a trend to increase butterfly survival rates and improve butterfly habitats and safe spaces along their migration route.

“Monarch survival rate is about 1 per cent in the wild, and for people who take them in it’s about 95 per cent,” said Strauss, who shared her learning experience with her grandchildren and neighbourhood school. “There’s no predators in my house, the temperatures are consistent, and there’s no bad weather, so the survival rate is greater.”

Nazar’s baby is one of the last three butterflies Strauss is going to release this season, and one of the most special because of the friendship it has inspired.

“I would go around the neighbourhood to find milkweed, and usually knock on someone’s door to make sure it’s OK,” she said. “That’s how I found Olga.”

Nazar said she “didn’t even hesitate” to agree to help when Strauss knocked on her front door.

“It was a nice surprise, really,” she said.

Nazar has lived in her home near Little India since 1952, and raised nine children in the neighbourhood with her late husband, Matt. One of her sons still lives within walking distance. He’s the one who brought her the milkweed for her garden, she said.

“I’ve been watching it because it can take over,” she said of the hearty plant. “It’s huge.”

Underneath the leaves of the huge milkweed, the two found several white dots that might have been monarch eggs. Strauss took the eggs home, and one of them took.

Nazar knew butterflies laid eggs, she said, “but if I would’ve seen that, I wouldn’t have thought that was an egg.”

Over the next month, Strauss kept Nazar updated on the tiny creature’s life cycle as it transformed into a caterpillar, then a nearly neon green cocoon, and late last week began to darken.

“I’m amazed,” said Nazar, who considers herself a nature lover. “And to actually see it in person. [Online or photographs] is not the same.”

She’s been sharing her story with family, friends and her church and recently travelled to a butterfly garden near Niagara.

“Anybody on the phone I tell them [about raising butterflies], and then they would tell me, ‘Oh yeah they have a friend who does that,’” said Nazar, to Strauss. “I was amazed — I thought you’d be the only one, but no… So, they’ll never die. There are so many people that are interested in them.”

Strauss said she’s “delighted” to be able to share her hobby with Nazar, who reveals she has a surprise personal connection to the butterfly’s journey.

“My child is going home,” laughs Nazar. She explained that while she is Ukrainian and was predominantly raised in Ukraine before immigrating to Canada, she was born in Mexico, the southern point of the Monarch migration. “He’s going home.”

The male butterfly, named Matt after Nazar’s late husband, was released into the wild Sunday, Sept. 25 in front of Nazar’s home, after spending a few minutes on Nazar’s finger.

Quite a lovely story. Thanks for sharing