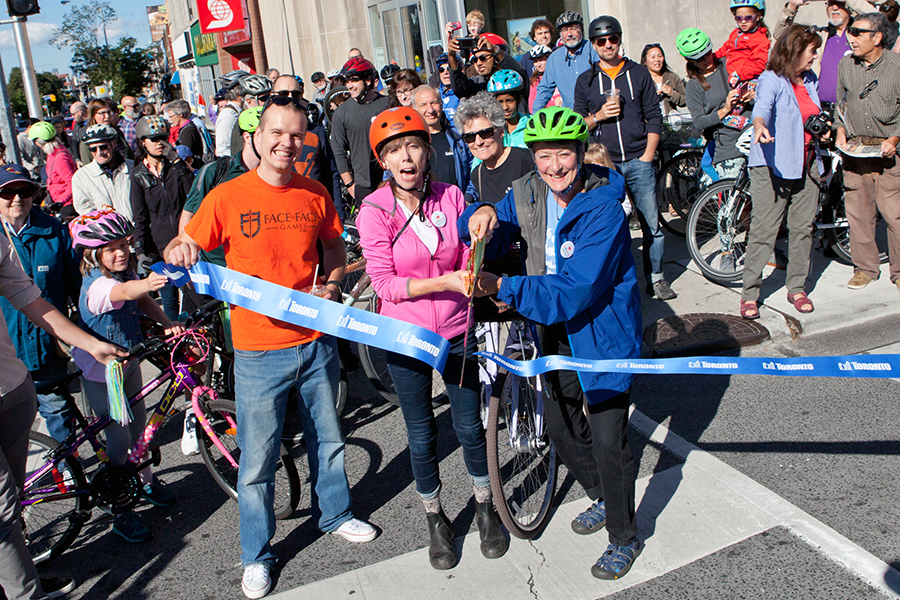 When our last issue went out for distribution, I braced myself for a strong reader response to columnist Stephen Wickens’s positive take on the new Woodbine bike lanes.

Like many of you, I watched the online debate become increasingly fractious as the lanes appeared on Woodbine Avenue between O’Connor Drive and Queen Street East. On Twitter, after pointing out news coverage and community meetings that a vocal critic of the lanes appeared to have missed, I was subsequently told that if children died because of the lanes, I would be somehow complicit. Meanwhile, exasperated moderators of local Facebook groups tried to maintain order by limiting new posts on the topic, but the comments raged on.

So, you can imagine the reaction I was anticipating as I clicked ‘publish’ on his piece, which argues that the lanes are a good thing for the neighbourhood and for Toronto as a whole, and that more are on the way (and they are – the city is eyeing Danforth between Coxwell and Victoria Park next, as part of the 10-year cycling plan). While the column was contextual, evidence-based and – perhaps most importantly – empathetic, those three attributes can sometimes mean little when we’re talking at each other about bike lanes.

But, as of this writing, instead of angry emails and comments, our readers (bless you) responded in kind to Wickens’s civil tone. Cycling advocates bolstered his article with stats and comments from past experiences, and readers with concerns voiced them respectfully. One reader simply said, “Pretty much sums it up.”

We asked the city about what the lanes mean for Woodbine’s garbage pickup. Along other main corridors, waste collection happens overnight or, at the very least, as far away from peak times as possible – but this is difficult on Woodbine, for a number of reasons. See our story here. To the reader who asked what would happen to seniors and those who use WheelTrans along the Woodbine corridor: we will be reporting on this and other questions next issue.

If you have a specific issue with the bike lanes, let the city know. Ward 32 Councillor Mary-Margaret McMahon has said the city is open to “tweaks”, and the city is monitoring traffic signals and travel times. Keep in mind that these lanes are rolling out at the same time as the Coxwell and Queen intersection is closed for upgrades, because of course they are. Now is also a good time to let officials know that improvements to East End TTC and GO services would help ease congestion headaches.

Many of those who spoke out publicly against the bike lanes expressed concern they weren’t consulted, or that they didn’t know the project was happening until it was too late. I agree that the city could be better at notifying residents about relevant meetings. Here at the paper, we sometimes receive mailed notices less than one week before the scheduled community consultation.

But there are things you can do to make sure you’re doing all you can do to be informed. Become an active participant in the democratic process. Sign up for your politician’s emails and newsletters, and follow them on social media (sign up for your neighbouring city councillor’s lists and official city feeds, as well). Call their offices and make sure you are on their mailing lists. Talk to your neighbours. Attend community events. And of course, read the paper.

Anna Killen is the editor of Beach Metro Community News.

Thanks for this note Anna. i’m glad to hear the debate has been civil at Beach Metro, as it has certainly flared elsewhere online.
As a pro-cycling resident who has watched our city fall behind practically every other major urban centre in terms of safe cycling infrastructure, I have followed the community backlash from the installation of the Woodbine Bike Lanes with some dismay. I don’t doubt that resident concerns regarding traffic infiltration are valid; any downtown neighbourhood sees the impatience and resourcefulness of Toronto drivers to avoid their fellow drivers daily. But it’s misplaced to blame the resulting danger on cyclists or the bike lanes. The problem is a bit of a chicken and egg one; we know from the experience in other cities (from Amsterdam to Paris and New York) that if you build a safe, secure and connected set of protected bike lanes, cycling will increase dramatically. But until you have that network, any particular bike lane may not be fully used. So we now have a bike lane on Woodbine that connects at the north end at Cosburn, but that has no real, safe connections further south. The solution is not to remove Woodbine after a few weeks, but to ensure that more safe cycling connections are made. The upcoming debate about placing protected bike lanes on Danforth Avenue would be the perfect place to start that discussion. And until then, I suggest that residents focus their efforts on getting the city to implement a traffic calming plan to…

This is a concept called an echo chamber, publish a picture of mary and Janet smiling on their bikes at the opening, publish an article that says hey, I used to be for bike lanes, but now I think they are great! Now follow it up with a letter from the editor saying let’s not kick up a fuss, let’s let those who wage war on cars spend our tax dollars to slow up traffic. Who cares if you are late for work, or late to pick up your kids, or have to sit in traffic while going to the grocery store. What is important is my political agenda, and I want bike lanes and to wage war on cars whether it inconveniences my constituents or not.