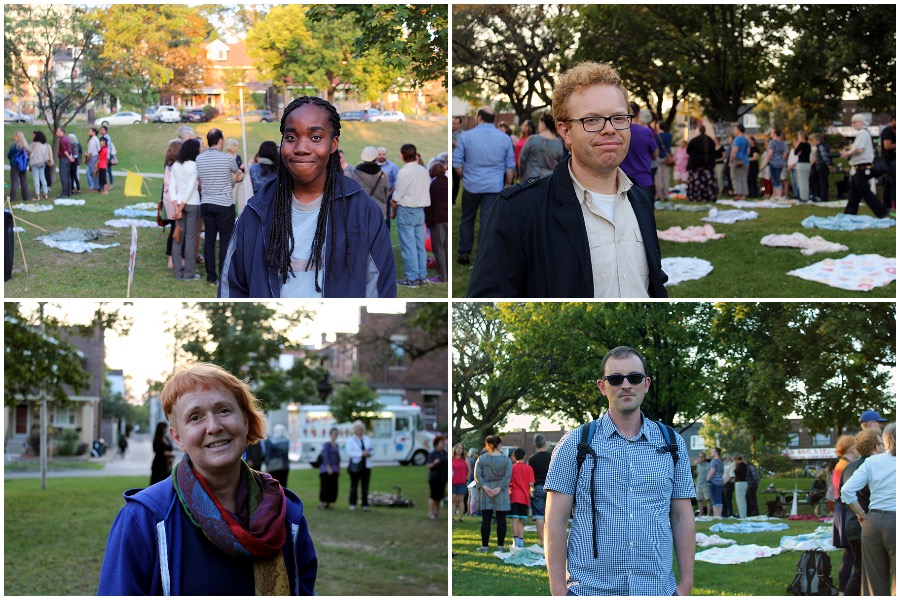 Clockwise from top left: Weajue Mombo, Adam Mason, Tom Griffin and Cathy Nosaty were among the more than 100 people who showed up at the Kitchi Blanket Exercise in East Lynn Park on Sept. 13. PHOTO: Josh Sherman

Meant to teach about Canada’s colonial history and the struggles of Indigenous peoples, the event drew east-end residents to the park for a variety of reasons, from reconciliation to education. Here’s why four attendees chose to show up.

Beach Metro: What brought you out?

Weajue Mombo: “Personally, I’ve always had an interest in Aboriginal history and everything. I guess [it was] another way to visualize it—it was a really good opportunity.”

How did it make you feel?

“I can’t really describe it. I never really thought—or I never really processed—how many [Indigenous] people were lost throughout the process of history and all the colonization stuff that happened, so it made me feel really surprised because I never knew it was on that big of a scale.”

What made you decide to take part?

Adam Mason: “I had heard about the blanket exercise several times and had heard it was very powerful and just wanted to come experience it myself because I had never done it before, and I’m an educator. I was also just trying to learn about it in my own process of learning so I can share with other people and my students.”

What made you want to take part?

Cathy Nosaty: “I’ve heard about this ceremony before, but I’ve never had the opportunity to experience it, so when I read that it was in my neighbourhood, I actually moved some plans to make sure that I could come. I also learned that this was one of the first times … it’s been carried out outdoors, and I think it’s extra powerful if it’s outdoors, considering the subject and the issues and talking about land.”

What made you want to take part?

Tom Griffin: “A few reasons. I was listening to somebody who’d participated in it before, and they said it was a very big experience for them. And just I would like to learn more about reconciliation. I’m totally supportive of the idea, but I don’t really always know how or what I’m supposed to do… so I think this was just like a first step towards participating in something.”