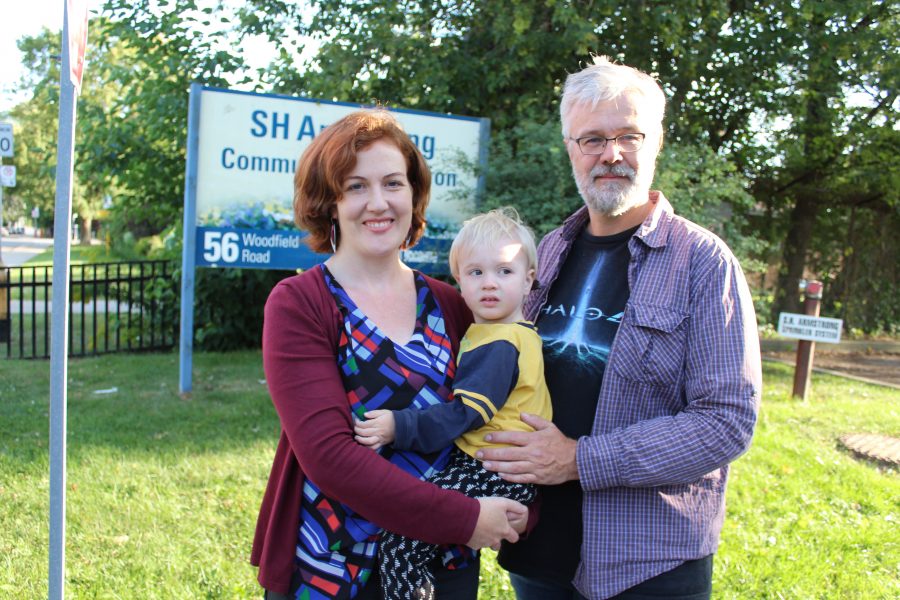 Community organizer Sara Ehrhardt, son Clarence, and spouse Glenn Gustafson plan to make good use of the S.H. Armstrong pool, which Ehrhardt says she didn’t realize was open for community use when she first moved to the neighbourhood. PHOTO: Anna Killen

When school let out for the summer, the fate of S.H. Armstrong’s pool was murky.

A decision by council during last year’s budgetary process saw $162,000 of city programming money pulled from the pool, located inside the Toronto District School Board’s Duke of Connaught Public School, where the Beach meets Leslieville. The city cited low usage numbers and other city swimming options nearby as reasons to relocate the funding, but the community pushed back, determined to show the city that the pool was a neighbourhood asset.

And show them they did. Heading into the school year, the pool’s future, while not out of the water just yet, is looking bright.

“Had the utilization rate fallen, there wouldn’t have been a chance for this pool,” said Ward 30 Councillor Paula Fletcher, who worked closely with the community she represents to keep the pool open. “But I call it the ‘Little Pool That Could’… People have really taken ownership of the pool and gone out to make sure people are taking advantage of that pool.”

Positive developments began in June when, following word that pool usage had shot from 69 per cent to 89 per cent after a push on social media, and aided by money from two local developers who want the pool to remain open, council voted to reconsider its decision. The pool would open for afterschool and weekend programs and lessons in the fall.

Meanwhile, a community working group – formed following a motion put forward by Ward 32 Councillor Mary-Margaret McMahon as other council members voted to cut the pool’s funding – spent the summer working on a plan to increase the number of people and groups using the pool.

The working group is unique, said Fletcher, in that it is co-chaired by a community member and the city, and involves representatives from the TDSB, Toronto Community Housing, and local shelters Red Door and Hope Shelter.

“It’s very community-based,” said Fletcher, noting she anticipates full programs when the fall season starts Oct. 2, in part because of the ideas brought forward by the working group. “It’s a great model… Usually we do these things in response to a crisis, but maybe we should be doing them here and there, looking at how to make better use of the facilities that we have.”

“People have come together from different walks of life … what’s happening is pretty exciting,” she said. “You wouldn’t normally have this much focus on any one pool, and I think it’s bringing to light issues and a better understanding of community needs.”

Now, there will be a targeted women and girls night at the pool, more lessons for toddlers to address the growing community, as well as more adult lane swims.

Practical things like the temperature of the pool have also been addressed, as well as steps to streamline the process to rent the pool for parties.

“There’s still work to be done,” said Ehrhardt, noting the importance of outreach and community involvement to make sure the pool gets funding in the future.

“People still don’t really know the pool is coming back this fall,” she said. “As a person that’s trying to champion the pool, what I really want is overwhelming demand for all the programs. But what I also want is to hear back from people about if what we’re doing is working.”

The committee is presenting their findings and recommendations to city council later in October.

Councillor Fletcher believes that “on Oct. 2, when those classes start, and if those classes are all full, there will be no question [that the pool will be funded next year].”

“One thing I know is that in our neighbourhood there is demand for aquatics programming and recreation programming, both for adults and for kids,” said Ehrhardt. “With the census data coming in, we’re really starting to see that there is growth of the under-five population.”

And the community is poised for more growth.

“It’s a growing community,” said Fletcher. “Besides the people and families moving in, there are a fair number of new condos that are being built on Queen East. One of the things is, how can you have that number of new condos, the city approving them, and then the city closing the swimming part of a community centre facility? I’m really thankful that we were able to turn this around.”

To see the returning and new programs visit https://www1.toronto.ca/parks/prd/facilities/complex/267/ or see the S.H. Armstrong insert in the city’s Fun Guide.