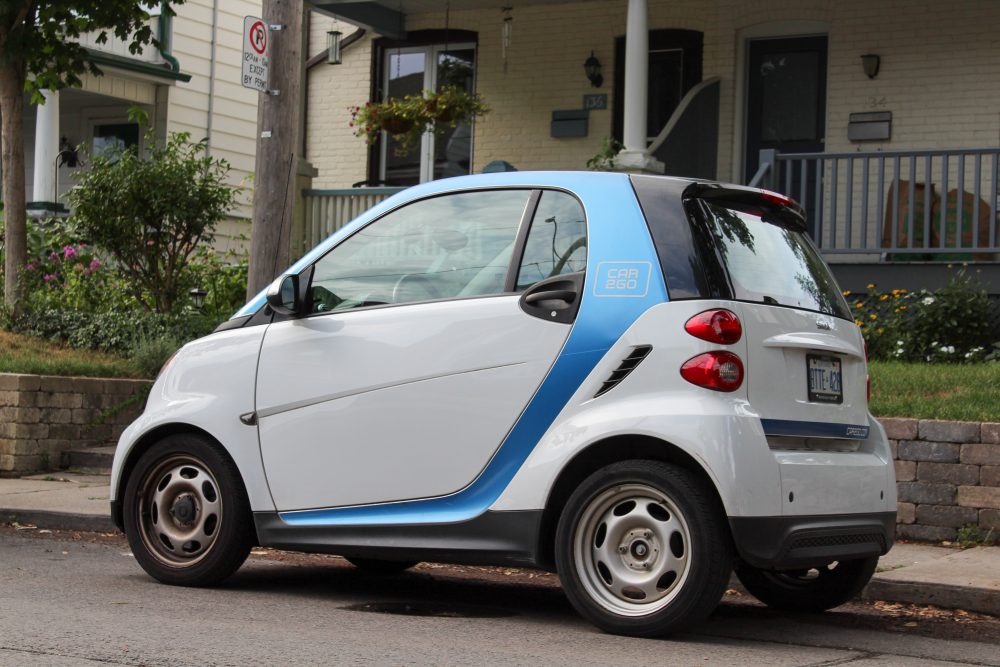 Car2go will pay the tickets for users who leave their cars in permit parking areas overnight. PHOTO: Anna Killen

When it comes to Car2Go, some area residents are saying they have got to go.

“I understand the concept must be wonderful for the members … pick up a car and just drop it off anywhere there is a legal parking spot. The trouble is after three hours without a permit, the car is parked illegally,” she pointed out in an email to Beach Metro. “Most times the cars are ticketed three times then moved.”

Car2Go offers an “on demand” vehicle sharing system that allows members to pick up a car2Go vehicle at locations around the city and drop it off in any legal parking spot available. Cars typically remain until another member picks it up and drives it to another location in the city. There are no penalties if the car is later ticketed by parking authorities – tickets are paid for by car2Go.

“We will take responsibility to relocate the cars and assume any tickets, as long as our members avoid parking at unauthorized areas such as meters and on rush hour streets. And we remind our members that trips can only be ended/completed within the designated car2go Home Area,” said car2Go general manager Mark Latchford.

The company has been trying for years to get the city of Toronto to agree to provide access to residential parking but despite their request being denied in March 2016, car2Go moved forward with allowing users to park on residential streets.

Prior to this, users had to pick up and park in designated spots around the city, most of which were Green P parking lots.

“We are not above the law, so we encourage our members to get familiar with Toronto parking rules,” Latchford noted.

The company currently operates in more than 26 locations across North America, Europe and Asia and has more than two million registered members.

But while the premise behind the company works for those who take part in it, residents like Redhead have been left wondering how a system that leaves vehicles parked on the street for hours without permits, taking up valuable street parking, hasn’t caused more of an uproar from the city.

A CBC article last year noted this was a problem throughout the city with residents from east to west voicing concerns about car2Go vehicles taking coveted street parking spots.

And while Latchford said they do not currently have an agreement with the city in place, he said they are working towards a solution – that solution however, may not be seen as beneficial to current permit parking holders.

“Car2go is currently meeting with city officials to discuss the future of carsharing in Toronto and work towards a pilot agreement that will allow car2go members to park in residential permit areas just like their neighbours do.”

But despite some resistance, the sharing economy doesn’t appear to be going anywhere – especially when it comes to car sharing.

“Since launching in 2012, car2go has experienced steady growth in its membership [and] with the introduction of on-street parking in early 2016, usage has surged,” said Latchford. “The continued growth of carsharing in a city like Toronto has been shown to benefit urban communities by alleviating traffic congestion and providing people who are unwilling or unable to afford a vehicle with the access to a car when they need it. Toronto needs more transportation options and car2go is one of them.”

What do you think of car sharing services? Let us know in the comments.

Every car 2 go car is shared by roughly 7 families. 6 less cars parked on your street
And there so small you can fit 6 cars in the same space as 3 bigger cars. Surprisingly the tree hugger types are the ones complaining
Try it. It works well and reduces the amount of cars. Try it really.

The people who use car sharing services like AutoShare/Enterprise Car Share don’t own a car regardless, so the argument that Car2Go replaces cars owned by “roughly 7 families” does not apply here. The issue is that while other car share companies pay for spaces in Green P and private car lots, Car2Go is taking away spots that belong to residents who live on those streets. In my area, Car2Go used to rent spaces in a shopping plaza only 2 blocks away from my home, where there are often at least 3 Car2Go cars are regularly parked and ticketed (sometimes one of them is a station wagon, so it takes up more space). What compounds this issue more is that parking switches from one side of the street to the other twice every month. Often these Car2Go cars aren’t moved, which blocks traffic and prevents garbage pick up since the trucks can’t get through with cars along both sides of the street. Long story short, Car2Go would rather incur parking tickets than do the right thing for local residents and pay to park in designated areas.

Amy, not sure where you are getting your information, but there are no Car2Go station wagons. We are one of the families that replaced our second car with Car2Go. They are reducing parking issues on your street, not creating them.

Actually, they are additional vehicles that previously wouldn’t have been on our street. Plus, I’ve seen these tiny cats parked in the dead centre of a two car spot, preventing anyone else from using it these drivers don’t have the common courtesy that regular drivers who pay for on street parking have for the limited spots. Also, when it’s a street that switches sides twice a month, these cars remain in place, causing additional issues.

Pay for street parking. Are you referring to the less than $1 a day that you pay for a street parking permit? What a joke. And how do you know that there wasn’t a car in front of or behind the car that you are saying is taking up two spots. And how would the person who got to your street in. Car2Go have gotten there if not in another car?

Car owners get absurd subsidies from taxpayers for their cars that sit idle and unused 96-99% of the time. Car2Go provide far greater benefits to cities and neighborhoods than private cars with fewer costs to society. It’s not even close.

I see car2go vehicles parked regularly and I actually agree that they are a benefit to the city and to their users, and these benefits outweigh the ‘occasions’ where we lose our prime parking because of them. Most people who park on our streets with a car2go vehicle would be parking there with a vehicle of some sort as non-residents because they are visiting a resident, which means the space on our streets would be taken regardless. The fact that the vehicle parked is identifiable as a car2go vehicle shouldn’t make it any different or less acceptable – no doubt there are frequent non-resident visitors that park their personal vehicle and end up getting ticketed overnight and as residents we just walk past and think ‘too bad for that person’. As for being inconsiderate of parking in dead centre of two spots or on the wrong side, we’d be honest to say that this happens to us not just with car2go drivers but sometimes even our neighbours.

I think what would really help is if the city of Toronto did dedicate some car2go parking in more of the residential areas as because the cars are so small they can park two in the space that a normal car takes and there are even some short curbs between driveways that these cars would fit into where other cars don’t. Car sharing is not going away and it helps decongest our roads and reduces pollution – we should show support for this positive solution and not knock it just because we don’t use it. As was previously said,…

I sympathize with Beach residents who can’t find parking near their house. As a long- time Beach resident I used to have that problem. However I got rid of my car about 5 years ago and now use Car2Go quite frequently. I think the people who are against the service are looking at it the wrong way. If I still had a car, and I was your neighbor, I would be taking up a spot on your street every day and every night. But since I now drive a Car2Go periodically I have freed up a space or at least part of one on your street. So when you see a Car2Go on your street, instead of grumbling, you should say ‘thanks Car2GO, you just made space for me’. Personally I love it and I don’t miss my car.