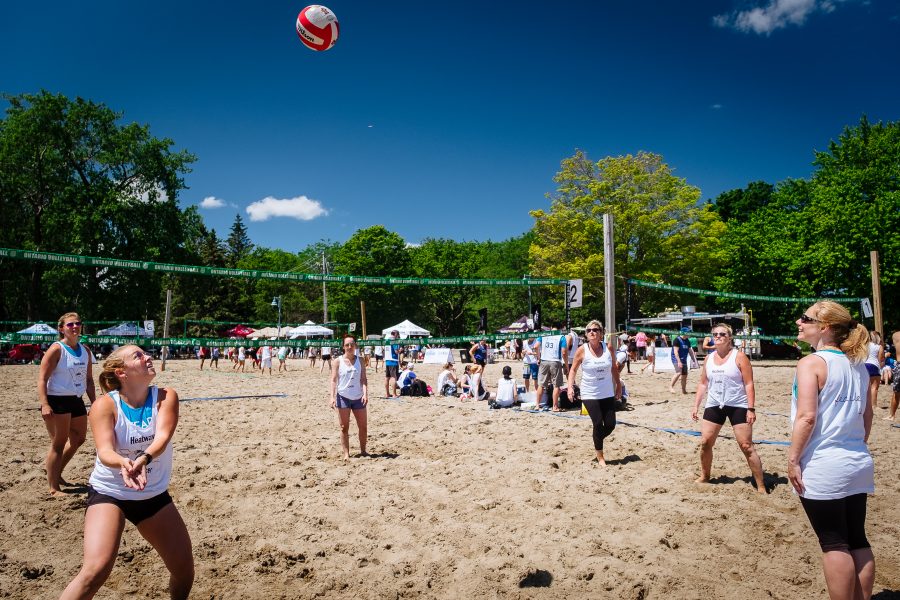 Team Fearless from Fearless Fitness practises ahead of a match at the the 23rd Annual Beach Volleyball and Beach Soccer Tournament. PHOTO: Edwin L.

If you’ve visited Woodbine Beach on a busy weekend this summer, you may have come across a new area featuring beach umbrellas, chairs, a cordoned-off beer garden, and even a massage tent.

No, the boardwalk doesn’t now take a detour at South Beach. The new enterprise is run by Boardwalk Place, the company owned by Tuggs Inc. Tuggs has made headlines in recent years for, among other matters, its controversial lease which provides exclusive rights to sponsorships, food and beverage in the eastern beach area.

According to Ryan Glenn, Manager for the City of Toronto’s Parks, Forestry and Recreation department, Tuggs is operating within their rights as per the lease agreement.

The operation is based on a “clause in their agreement that specifically says through sponsorship, they are able to offer beach umbrellas and chairs and other beach-related accessories.”

Ward 32 councillor Mary-Margaret McMahon echoed this statement saying that she also checked with city staff and “Tuggs is allowed to do that under their lease.”

She said she was not aware before the season that they would be exercising their right to operate such activities this year and wasn’t sure why they decided to exercise the right now when they have not attempted to do so in the past.

Attempts to reach Boardwalk Place for comment were unsuccessful.

However, Glenn speculated that the sudden push to add more business to the beach might be connected to the other activations that were installed this year, which include two paddleboard kiosks and one bicycle rental kiosk.

Maybe “seeing these go up made them think they should do something too,” he said.

Meanwhile, the cordoned off beer garden was part of an annual SickKids fundraiser called Heatwave, which held its first tournament on the weekend of July 8 and 9. According to McMahon, the fencing around the area is specifically for the beer garden.

“It’s mandatory you have fencing for beer gardens,” she said.

Lynn Bessoudo, public relations manager for SickKids Foundation, said that all proceeds from the Heatwave tournament went directly to SickKids.

To date, the tournament has raised more than $4-million. Their goal this year was to raise $350,000.

An obvious move. Surprised it took Tuggs/Foulidas this long to do it.
It’s more fund generating ideas that local charities can’t access to help them raise money for their good works. They are providing services local charities could easily do.
Tuggs is a pestilence and the City approved it all. Unbelievable. There will be more to come!