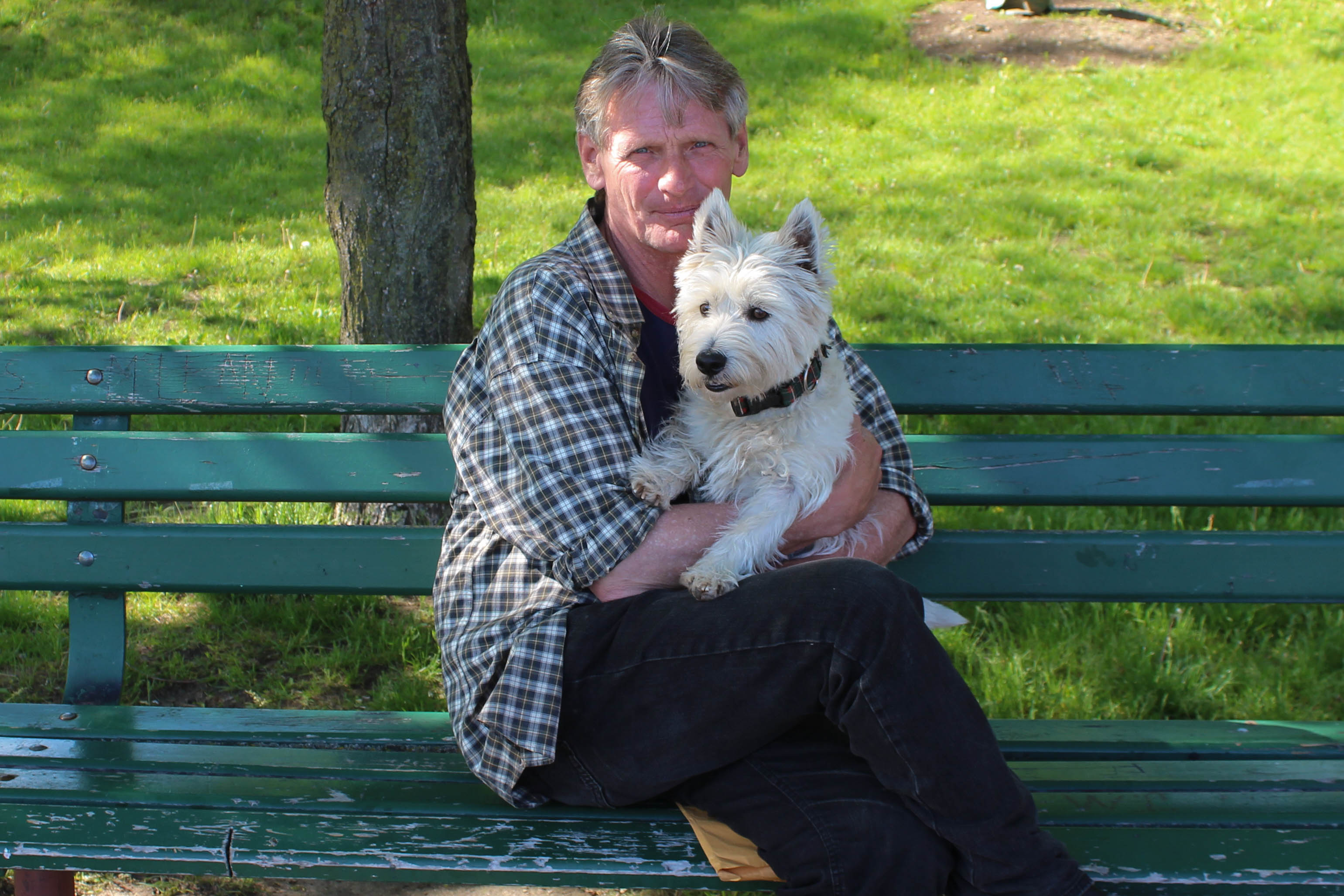 Dean Will sitting at Stephenson Park near his home. PHOTO:Sophie Sutcliffe

A rally in support of a man who was the victim of homophobic vandalism last year will take place this afternoon near Stephenson Park — however, this event isn’t in remembrance of last year.

Instead, the gathering is because, a year later, Dean Will has once again had his pride flags stolen from outside of his home, an event following what he says has been a year of harassment that included an assault near his home in May.

“It started last summer and it never went away,” said Will, who is reaching out to the community for help after feeling failed by official channels. “The system just doesn’t work.”

Will, in several interviews with Beach Metro over the past month, detailed his ongoing frustration with Toronto Community Housing Corporation (TCHC), which owns his building, and their handling of what he said has been continued harassment by a fellow tenant. He said he has been documenting interactions leading up to a Landlord and Tenant Board hearing and is not satisfied with the level of communication involving his case, saying that he felt like he was “left to dangle.”

“It just felt like it was going nowhere and they weren’t informing me what was happening at their end to deal with the situation,” said Will. “They just kept saying fill out the form, call security. That’s all I ever heard back.”

TCHC spokesperson Brayden Akers said in a written statement that the TCHC was “sorry to hear of Mr.Will’s assault and the theft of his property,” but that, as it was an open police investigation, they would not be able to provide additional comment on the particulars of his case.

Akers did however say that in general, those who make complaints against their neighbours, like Will had, cannot be updated as “the Municipal Freedom of Information and Protection of Privacy Act prevents us from sharing any information regarding active tenant investigations with the complainant.”

He also mentioned that “if a tenant is charged with a crime against another tenant, we immediately begin eviction proceedings against the accused.” These eviction proceedings can take time however, as Akers noted that out of 260 evictions pursued for crime-related incidents from January 2015 to May 2017, these proceedings have resulted in 61 evictions, 68 mediated agreement and 28 conditional offers, with another 71 of these cases still in the hearing process.

Constable Jonathan Morrice, Toronto Police 55 Division crime prevention officer, confirmed police are investigating two incidents, one of which is being investigated as a potential hate crime.

“We have an incident reported to us on June 8 for a mischief under where an individual had pride flags outside of his own residence. He went out and shortly after returning, he noticed that the flags were removed and that the light fixtures that they had been placed in were damaged. Police and community housing people were called and there was a report on file for the police to investigate,” he said.

Another incident, reported May 18, is being investigated as an assault — although police do not have any active leads, confirmed Morrice.

Will said he was walking to the grocery store near his house to get some cream for his morning coffee on the evening of May 18, when he was attacked from behind by an unknown assailant in a red shirt. A neighbour intervened and the suspect ran away, he said.

Morrice will be one of several officials and community residents attending Will’s house this afternoon.

After last year’s incident, when Will’s pride flags were torn down several times, Will said the housing company was looking into getting security cameras installed. That did not happen, something Will said would have helped his current situation.

Morrice said that while increased vigilance and contacting the police with information can help with crime prevention, surveillance video can be “critical” once a crime is reported.

“It just helps the investigation and prosecution, because we can then identify and prosecute the individual as opposed to just having it rely on what might not be strong witness testimony,” said Morrice. “Individual residents can install their own surveillance cameras, and that’s what I’m going to be talking to the victim in this matter about…. He can put his own cameras up to capture any part of his own property.”

Akers was less clear however as to whether a camera would be allowed to be installed, saying in an emailed statement that “tenants must seek permission to affix an object to a wall outside their unit”, and that TCHC would encourage tenants considering installing cameras to “seek legal advice.”

A local community group has indicated they will raise money to provide Will with a camera.

Speaking last night, Will said that while he is thankful for the community response and the donation of security cameras, cameras are only one part of the solution and he is still concerned for his physical safety in the future.

He said that while he is appreciative of the fact that TCHC, the city and the police are giving this matter their attention, he feels like more could have been done earlier on.

“I kind of feel like if city services had been on top of it and taken me more seriously, this whole thing could have been avoided,” he said.

He also mentioned that while he is frustrated with the response he received, he thought it could have been a worse situation for someone who is not as vocal or does not have the same understanding of the system.

“I worked with [former MPP] Gary Malkowski… I was his interpreter. I sat in Queen’s Park for five years, I’m not a dummy,” he said. “I’m articulate, I can speak up for myself, you know. I have an attitude of we just soldier on, right?”

And Will is adamant he is not going to move to get away from the problem.