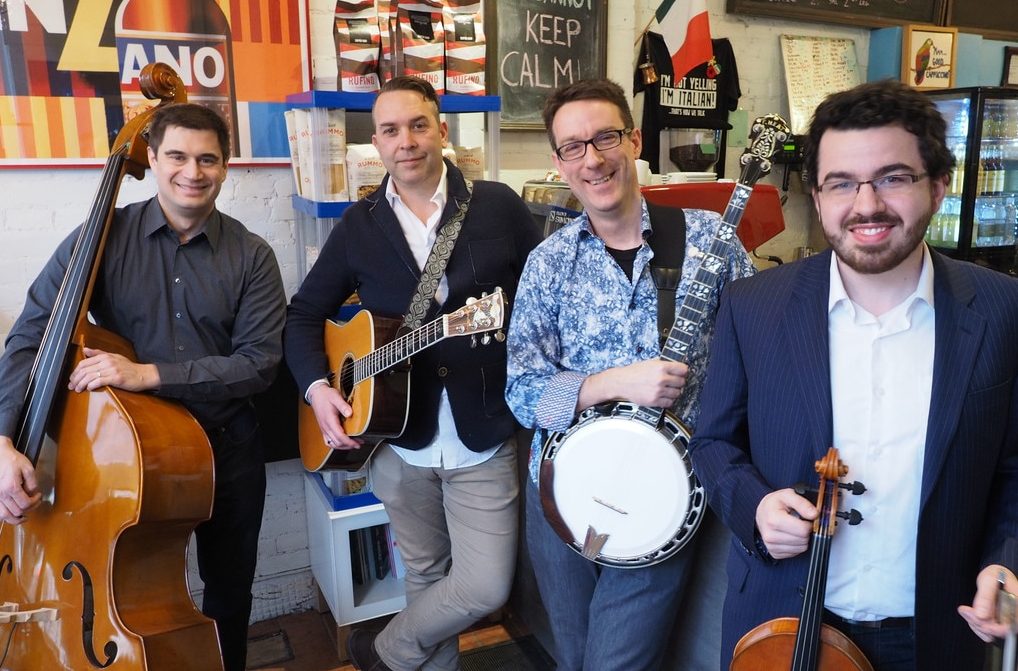 It’s 6 o’clock on a Monday when the regular crowd shuffles in: they’re all in the mood for a melody and you’ve got us feeling alright.

The sound check has been going on for an hour. The band was so concerned about their sound they brought along their own PA system – even though we have a very good one, tried and tested. Derek, the band’s founding leader and artistic director has been fussing over every little detail, and the lights and stage are now set. On this Monday night, it is the world premiere of the Renaissance Ramblers.

This is not Carnegie Hall or Massey Hall – this is the Memorial Hall in St. Aidan’s Church at Silver Birch and Queen Street. In front of the stage, the tables have been set and the candles lit, and a special volunteer group has been working in the kitchen for the past two hours preparing dinner for somewhere between 70 and 100 guests. We never know how many are coming. The Out of the Cold program has been splendidly and successfully volunteer-run for the past 10 years. Guests will shower, eat snacks, play games, chat, and maybe see a counselor, minister, or foot specialist before migrating up to the hall for dinner and music. Some will stay overnight and for breakfast. It takes a lot of remarkable people to make this such a special place for so many to depend on and enjoy coming to week after week during the cold winter months.

Part of what makes St. Aidan’s such a warm and welcoming place is not just the amazing volunteers who pull this together week after week – and deserve much recognition – but also the roster of volunteer performers who take the time to come and play for our guests on a Monday evening, putting on a show worthy of an admission fee.

Back to the Renaissance Ramblers. This night our guests are in for a real treat – it’s the first live performance from a band I’m sure you will hear much more of in the years to come. Their sound is unique. The obvious comparison would be to bunch it up with the early Civil War period bluegrass and 17th to 10th century baroque – but that would be doing the music, its creators and audience a disservice. Some of the themes and progressions of the music go as far back as 16 century and the bluegrass portion of the sound is part of the current reassurance known as Americana. The sound is like a special blend of Jack Daniels and a fine Cognac. This music is to be enjoyed at your leisure, but for a few of the tunes you may want to put your dance’n shoes on!

I spoke with the group’s founder Derek Pert about this new group, which includes Laurence Schaufele on viola, Chris Carlone on acoustic guitar and Bryce Sharman on acoustic bass.

B.H. Luft: How long have you been working on this idea?

Derek Pert: I occasionally dreamed about working with this material back in the early ‘90s, but I started writing down all the chord charts by ear about four years ago (there were virtually none available). In terms of building an actual ensemble, I started approximately two years ago.

BHL: Where does your sound come from?

DP: As a teen I used to listen to some authentic early music played by mostly classical folks. Later in the 2000’s, I discovered bluegrass and took up the banjo.

I noticed that bluegrass and a lot of early music have an unusual mix of fun and melancholy. In bluegrass it’s called the “high lonesome sound”. The early music pool we draw from has a remarkably similar magic so the idea flowed from that connection.

BHL: Your music feels familiar, yet sounds completely different … why is that?

DP: It stems directly from what is arguably the bedrock of western music. Like a strain of original DNA, it resonates down through the centuries, never being entirely diluted by an ever-diversifying musical gene pool. That original root is laid comparatively bare in our repertoire. Interestingly, a few popular tunes and rhythms from the medieval and renaissance can still be heard today in the form of children’s songs and Christmas carols. We’re drawing from the same original pool.

BHL: I was a little apprehensive about how your sound would go over with the guests at OOTC but as it turns out, you guys were a huge hit. Did you have any apprehensions about playing here?

DP: Not really. We were confident because of the universal appeal. Nearly every tune we do is easily memorable (e.g., people can whistle it), there are some snappy rhythms, and there’s a healthy diversity of happy/sad, slow/fast. There’s also drama and fun that anybody will get. It’s not “music for musicians”. These are strong ingredients in any century.

BHL: You guys seem really tight for relative newcomers to performing live as a group. It usually takes years to perfect a sound quality like this. I take it you didn’t just jam one night and decide to go live?

DP (with a smile): Not at all. I auditioned a lot of musicians – I wanted the dedication and the musicianship to be just right, and of course the mix of personalities can completely change the sound of a group.

With the current personnel, we rehearsed for approximately one year, with 7 to 8 rehearsals per month. I would have liked more.

BHL: What does the immediate future hold?

DP: Playing and developing through our new, semi-regular Tuesday night gig at a cozy spot in the Junction called 3030 Dundas West. Also, preparing for a Toronto festival which we’ve been booked to play this summer. Events are posted on our website.

BHL: What are you hoping the longterm holds for this group?

DP: It would feel great, some day, if some of these tunes got picked up by other performers outside the classical world, for example, by members of the bluegrass scene. We’ll probably have to record a fair bit, to lay down a starting reference. That takes years. For now though, it’s fun to be the only act in the world (as far as we know) doing this music without notation, by ear, improvised, and aimed at modern, non-specialist audiences.

B.H. Luft is a 37-year Beach resident and retired producer, writer, director who is working on his own music more seriously these days and who hopes to have his first full length novel, Tijuana Crossing, published soon. He helps organize the music for the Out of the Cold program at St. Aidan’s in the Beach. Learn more about the Renaissance Ramblers, and where to catch them live at www.renaissanceramblers.com.