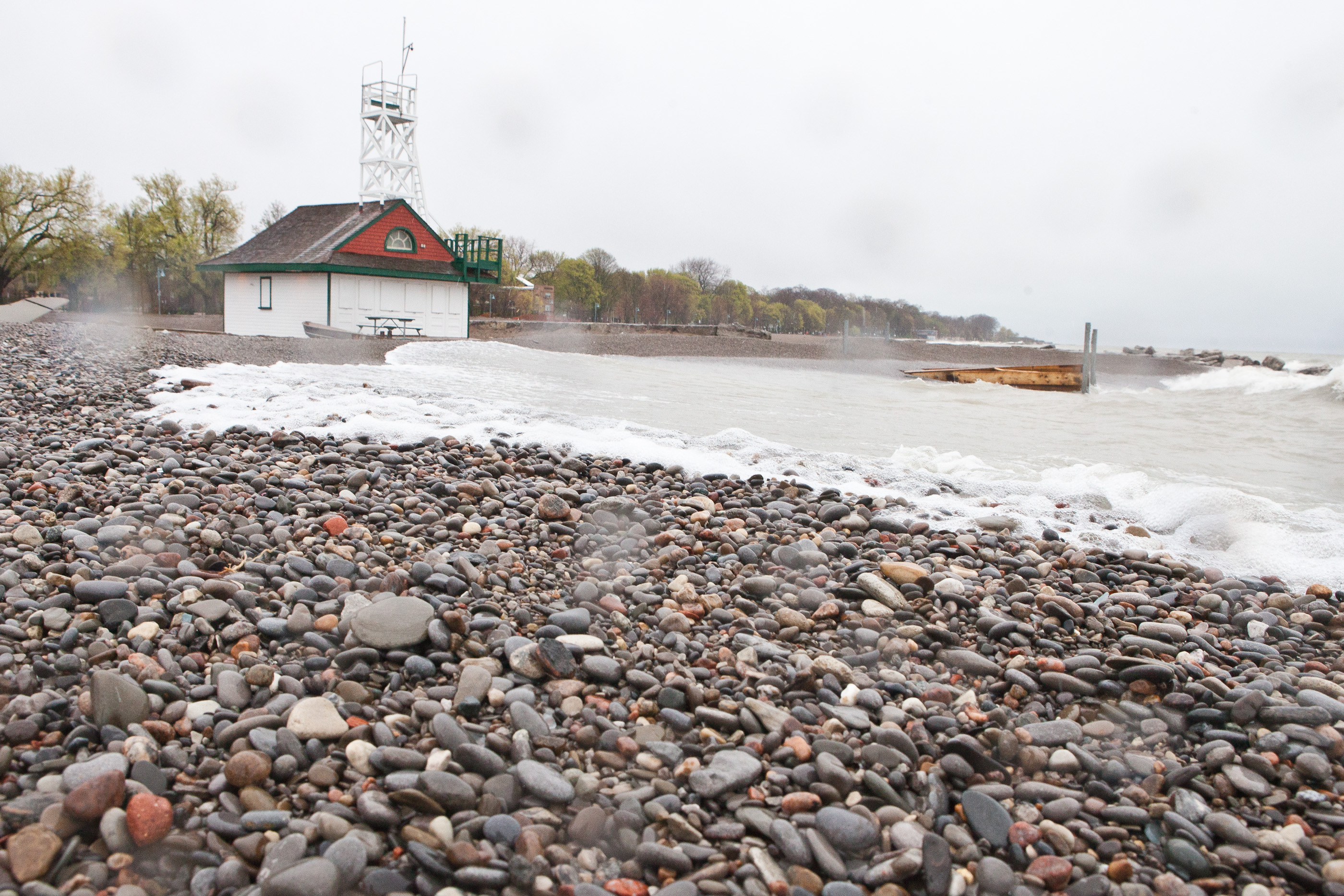 Waters begin to rise on the morning of May 5 near the Leuty Lifeguard Station. PHOTO: Phil Lameira

“It’s weird seeing 10 carp a metre long thrashing about on the roadway…they are mating most vigourously.” That was the response of an acquaintance to my inquiry about life these days on a partially submerged Toronto Island.

The effects of the rising lake are a bit different off the island. Closer to home, our beaches are largely washed away. Roadways and basements are flooded. Our iconic Leuty Lifeguard Station seems to shift around on the sand like a toy.

There’s a certain strange beauty to all of this that is captured and shared digitally over and over. Perhaps it’s the jarring juxtapositions – kayaks moored to submerged picnic tables, neon Muskoka chairs peeking out of water where we know land ought to be.

But mostly, the scene and the circumstances are unsettling and ominous. One senses a force unleashed that can’t ever be called back and tethered again. Whether that’s true or not, who knows? The answer lies in knowing the cause and my guess is there’ll be no agreement on what that is. Time may reveal the truth of it all, I suppose.

But in the interim, here is the point, I think – this is what climate change looks like. If this isn’t it, these are, at least, some of its symptoms. This is our glimpse into the future.

What we do know is that we’re locked into some change as a result of too many carbon emissions over too many years. The challenge is, of course, to limit that change and avoid the most devastating of what’s possible. The scientists – at least any worthy of the name – tell us that to avoid catastrophe we must, by the year 2050, reduce our greenhouse gas emissions to at least eighty percent below those of 1990. It is ambitious but it is also necessary and, thankfully, achievable.

But, of course, the issue is never the target. They’re easy to set. And in spite of them, nations have faltered and international agreements have come undone. But cities have been different. In cities – around the world – progress has been made. Witness our own city – emissions have dropped by over 24 percent since 1990.

But that, still, is not enough. Noting an emerging gap between projected emissions and the 2050 target, a recent City Report – TransformTO Report#1 – tells us that not only is significant action and investment required to correct our course, it needs to happen now.

This is why I recently joined with a number of East End environmental scientists and concerned citizens under the banner of GreenEast to write a letter to our Mayor, imploring him to lead Council to fully adopt, fully implement and, importantly, fully fund the recommendations of a second City Report – TransformTO Report#2.

TransformTO Report#2 provides that course correction. It calls for an integrated set of programs and policies including,

These are all effective responses to climate change. And, they are also the programs and policies of cities committed to modern infrastructure, the creation of decent jobs and the equitable distribution thereof.

On July 5th, Council will vote on TransformTO Report#2. It is an opportunity for Council to effect necessary change – to invent and invest in new ways to live and be productive in our City. The future that we all desire for ourselves and for those who follow is within our grasp now – but not for long. To paraphrase David Suzuki from some years ago, others have done their part. The scientists have done their part. The burden now shifts to our elected representatives to do theirs.

Matthew Kellway is a member of Green East and former MP, Beaches-East York

Once again, Matthew Kellway draws our attention to an important and potentially life-conserving issue. Unless our elected officials lead the charge and enact change, we will consign our children and their children to a very bleak future. Let’s hope Council does the right thing and votes in the majority to adopt the TransformTO Report #2 on July 5.

Hey Matt. Was it climate change that caused the high water and storms in 1952?

” Climate is the primary cause of Great Lakes water-level fluctuations. Understanding
relations between climate and lake-level variability, as well as the mechanisms underlying wet and dry extremes, is critically important in light of ongoing and future climate changes”. So according to the scientists the answer to your question is yes. 1952 was and maybe the recorded peak.

Sorry, putting quotes around a statement without citing a source does not lend any credibility to it. Many factors affect the level of the Great Lakes, including how much water is being let out through the dam east of Lake Ontario (which was built after the events of 1952). In the case of high water levels in Lake Ontario this spring, they have been caused mainly by higher than normal precipitation, which is weather, not climate. Blaming every event that occurs on climate change seriously affects the credibility of those who engage in such hyperbole. But hey, if you can make political hay from doing so, why not – looking at you Matt.

You will have to do your own research, I’m busy.