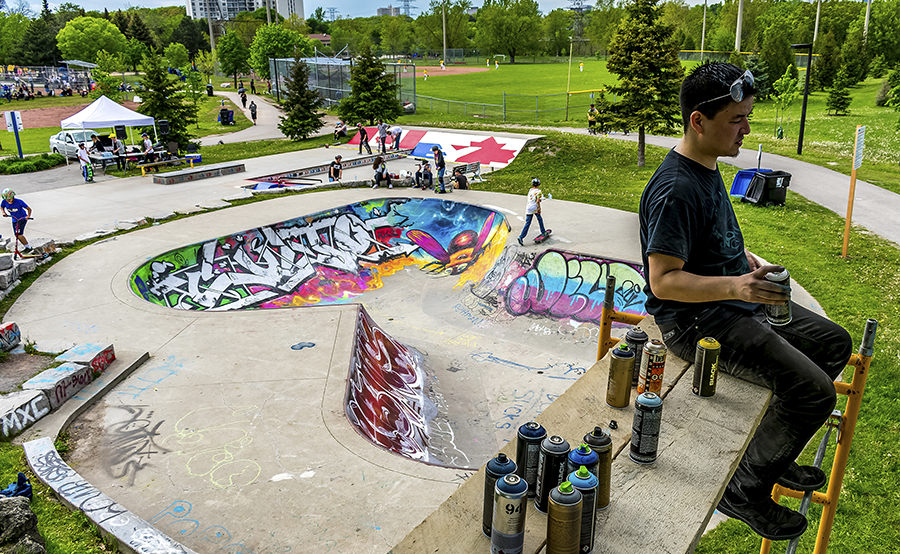 The East York Skate Park gets a refresh May 27. PHOTO: Dave Paul / www.instagram.com/dp.ey

Skateboarding is about community. For the 10th anniversary of the opening of the East York Skatepark at Stan Wadlow Park, the Toronto Skate Commission recently held a clean-up and barbecue at the park. Artists came to cover old graffiti with their work and skaters came to repaint ramps and clean the park. It wasn’t all work though – the skate commission gave out hot dogs and hamburgers and held a trick contest. East York’s city councillor Janet Davis stopped by to express her pride in the community saying, ”I look around at the people here and I am so grateful for the participation in the community.”

Do-it-yourself is a huge aspect of skateboarding, from the individualistic nature of the activity to massive park construction projects like Burnside Skatepark in Portland. Skateboarders are a collective with motivation for what they do, all the community needs is a green light from the government to turn wasted space into something positive.

However, DIY skateparks have sparked much debate among city planners and skateboarders. In the west end, 22-year-old Syd Patterson and his friends built a miniature skate park which they paid for out of pocket. The park facilitated a type of skating that most of the city’s parks do not. Through hard work, dedication and creativity, a largely unused space became something that people could enjoy, but it also happened to create liability issues with the property it was situated on. The city demolished it.

Skateboarding is whatever you want it to be. It could be exercise or thrill-seeking. You can skate to express yourself in the tricks you do or you could skate to pass the time in a constructive way. Skateboarding is entirely self-motivated and teaches that perseverance reaps rewards because whenever you try, you improve. There is no right or wrong way to skate, which might be why it isn’t viewed as a legitimate outlet for some people. But that open-mindedness is part of what makes its culture so great – anyone young or old is welcome at the skate park.

So, why is making skateboarding more accessible such a bureaucratic process? The system for building new skateparks is more complicated than it needs to be. Let skaters build skateparks.

Jesse Tomas is a student – and skateboarder – at Malvern Collegiate Institute.

Im hoping the author of this article can contact me so I can thank them and provide more resources to investigate DIY skateparks, as its an issue ive been working on for 4 years now. im at young.nicky3@gmail.com