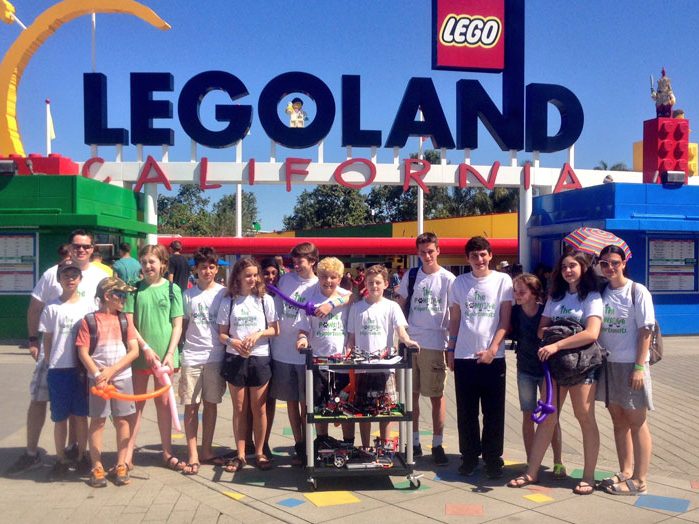 Everything clicked for the Glen Ames Senior Public School’s robotics team at the Legoland North America Open Competition, with the team winning second place in the innovative solution category for their canine-centric project.

“They’re all really excited,” said their coach, Glen Ames teacher Luke Martin. “It was unbelievable… they were just in their glory the whole time, just meeting all these other teams and talking about their projects.”

The students, who call themselves the Pawsitive Proportionists, are part of the First Lego League, where students are challenged to research a real-world problem and develop a solution by designing, building and programing a robot, which they then compete with.

This year, as the challenge asked participants to identify and solve a problem in which humans and animals interact, the students came up with PetPortion, an automated dog feeder designed to help manage the dog’s weight. The device was inspired by Martin’s mini dachshund.

“We created a device that will give [the] mini dachshund the proper amount of food that they need according to their weight,” explained Robbie, the team captain of the Pawsitive Proportionists in an earlier article with Beach Metro. “It wasn’t a diet machine… we slowly decreased the amount of food they were getting or increased if they were underweight.”

The competition, which took place in California over the weekend, hosted teams from across the world, all of whom had qualified based on their success in previous competitions. The Glen Ames team qualified after coming in second place at the provincial competition.

“It’s quite rare [to attend this competition]… you have to kind of have the perfect storm of things coming together and personalities and hard work and a really good project idea, which is what we had this year,” said Martin.

While three teams have traveled to some sort of international tournament over the past 10 years, he said this is the first time a Toronto District School Board team has won a major award.

Martin mentioned that the students, who are all in Grade 7 and 8, put in anywhere from six to 15 hours per week, depending on how close they are to a tournament. This group even put in time over the winter break, working with a mentor from a previous team.

“That’s the type of dedication that these kids have, so it’s nice to see it pay off for them,” said Martin.