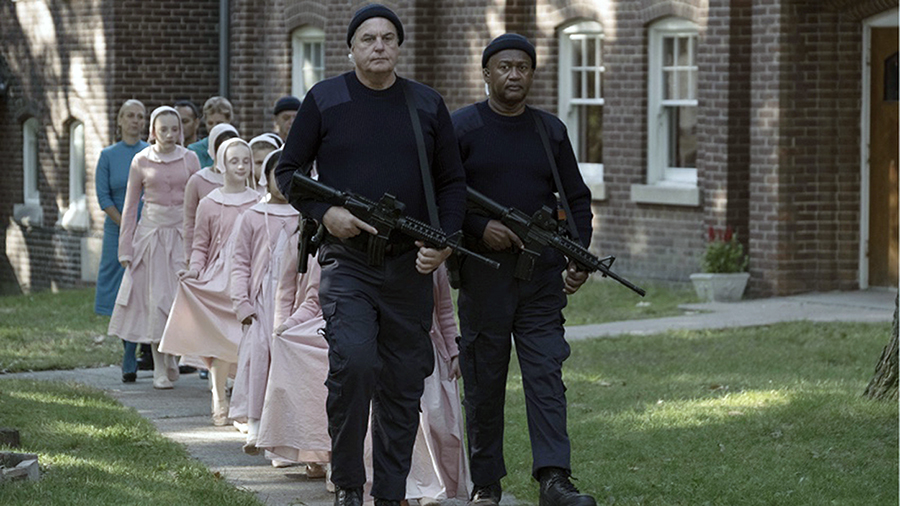 Feminism is just one aspect of The Handmaid's Tale, recently adapted for television, and made all the more chilling because of scenes filmed in the Beach, like this one. PHOTO: George Kraychyk/Hulu

Feminism is a concept that is ingrained in the constitution and prevalent in Canadian culture – take, for example, Margaret Atwood’s dystopian novel The Handmaid’s Tale, recently adapted for television, with scenes filmed in our neighbourhood. People like the Famous Five, and former prime ministers Kim Campbell and Pierre Trudeau fought for equality in a time where it was more narrowly accepted. Leaders like them and countless others helped make it so that, ideologically, all Canadians are born equal, regardless of gender.

As the struggle changed, so did feminist movements.

Today, women continue to face obstacles in the practical application of this ideology. Recent campaigns like the Women’s March and #freethenipple, a campaign that challenges the censorship of women’s breasts, are examples of the face of new-age feminism in the media. Our current prime minister, Justin Trudeau, routinely refers to himself as a feminist and has made promises of gender equality in parliamentary representation. As the discussion around equality moves forward, what are the opinions of the next generation – specifically, Beach high school students – on feminism?

Like most important social discussion, issues around equality are not black and white. The views of anonymous Malvern Collegiate students who responded to a recent online informal survey reflect that. I asked students to think about their ideas on current feminist movements and the issues it concerns.

The top two issues that Malvern respondents identified are objectification and the wage gap between men and women. Some commented that over-sexualization of women in the media is at it’s height and expressed concern about the message it sends to all genders.

The wage gap is the top issue for Malvern students, perhaps because we are thinking about our future career paths. Though the Charter of Rights and Freedoms states that no person can be discriminated against based on gender, on average, research shows Canadian women earn less than Canadian men. One Malvern student said that the biggest obstacle facing Canadian women was, “Pay gap/not being taken seriously – even if you have the same credentials as a male, especially in male-dominated workforces like engineering.”

The power in certain job fields is held by mostly men who, whether it is based in sex or not, hire mostly men for higher paying positions. Lack of representation of women in business and STEM careers is a problem ready for this generation to solve.

Views on feminist movements are more mixed. Students were asked about campaigns like “Free the Nipple” and “The Women’s March” with varying responses. Many students were in complete support for both campaigns but few explained their rationale. A student says, “I think the #freethenipple campaign overlooks the idea that men are sexualized as well as women. The Women’s March is something I support, considering it takes stand against the potential oppression of a gender based on the views of a leader.” A student in support of #freethenipple notes, “It is important in the recognition that sexism still exists.”

Students were divided on feminism’s representation in the media. When asked whether the feminist movement is accurately portrayed in the news and online, a quarter of respondents felt that feminism was portrayed unfairly and half said that there is inconsistent accuracy in the representation of feminism. A student who is not pleased with general media said this: “There is far too much hatred being spread on media platforms, specifically social media, and news outlets only ever cover absolutely ridiculous and made up problems.”

One student made it clear that, “there are more than two genders and I believe in equality for all of them.” Voices for the trans and non-binary community grow louder every day.

It is important that leaders listen to those voices, and that we as students continue to make them heard. From clubs like the Young Women’s Empowerment Group and Malvern Students Against Sexual Stereotyping to social media, students at Malvern have opportunities to share their voices on gender-related social issues.

Jesse Tomas is a student at Malvern Collegiate Institute with a keen interest in writing, culture and politics. This column is part of a new Beach Metro News series looking at high school life in the neighbourhood through students’ eyes. Are you a student with a story to tell? Send a note to editor@beachmetro.com.