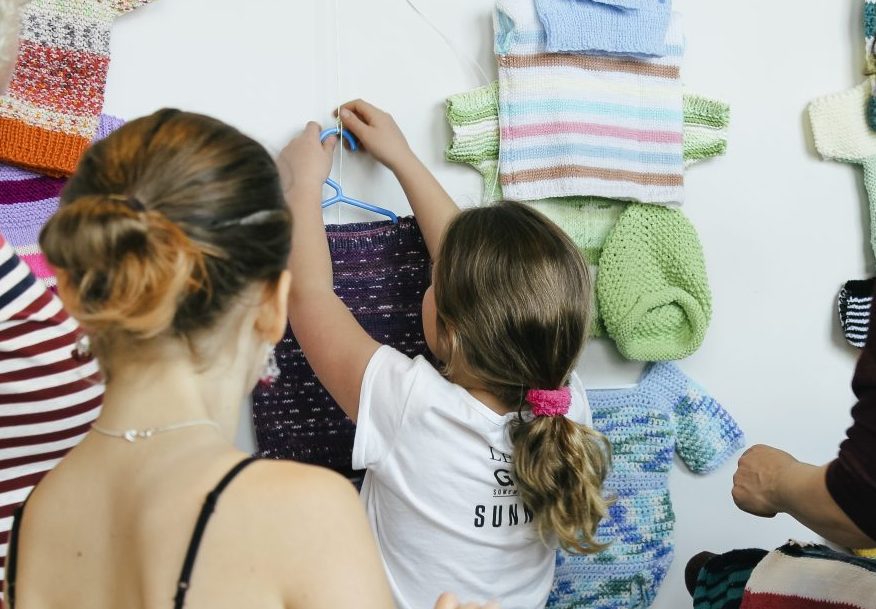 Madeleine and Sophie help hang sweater vests created by the members of Knitting for Shivering Children. The items will later be donated to Canadian Food for Children. PHOTO: Lara O'Keefe

What began as a small initiative to provide warmth to impoverished children has now turned into a global push to prevent pneumonia.

Knitting for Shivering Children, a group that works out of Beach United Church, started in 2006 with Sharon Aylesworth at the helm. At the time, the group would meet at Bellefair United Church to socialize and knit sweater vests that they would later send to Canadian Food for Children (CFFC) — an organization that sends nutritious food and warm clothing to developing countries around the world.

“We knit little sweater vests,” explained Patricia Davies. “They’re called pneumonia vests — because of the temperature ranges that these kids go through, they get pneumonia and they get respiratory illnesses and so these are to keep them warm at night.” They sent 66 vests in the first year, she said.

Though the group fell to the wayside when Bellefair United Church and Kew Beach United Church first amalgamated in 2007, it picked up again two years later and became even bigger than before.

“It was a way of uniting the separate congregations and doing what knitters like doing best, which is knit!” chuckled Davies. “And many of us are mature women with grown children and we just… you run out of things to knit. So it fulfilled a few purposes. It was a very nice way of the women of the two congregations getting to know each other, doing something we thought was very worthwhile, and also giving a forum for community and meeting new people.”

Now the group — which consists of more than two dozen knitters and crocheters — meets one Saturday morning a month at Beach United. But Davies was quick to point out that Beach United is a community church so “at least half don’t belong to the congregation. They’re from the community and they’ve heard about us and they’re knitters.”

The email list is even bigger with Davies estimating approximately 120 people on the list, many of whom aren’t in the city, let alone Canada.

In order to deliver the supplies once they’re ready, the core group will drive it to the CFFC warehouse in Mississauga where Davies said they ship at least one container a day to 22 countries around the world including locations in Africa, Central and South America, and Southeast Asia.

Last year, the group created and sent 975 sweater vests, 175 blankets, and dozens of stuffed animals and hats. “We lost count after that…bounty just kept pouring in! And that’s what we sent out,” said Davies.

This year, the goal is to hit 1200 sweater vests and 200 blankets but “we have been so successful growing organically that it just has worked so well that every year we set goals for the current year [and] we almost always exceed it.”

“The work is quite incredible,” she said, noting that the group has now started contributing to the Out of the Cold program as well.  “We’re doing sweaters and hats and mittens for OOTC. And we give those to our contact at St. Aidan’s.”

As for those who may be interested in joining, “anybody can join,” said Davies, adding that if you don’t already know how to knit, “we will teach you how to knit.”