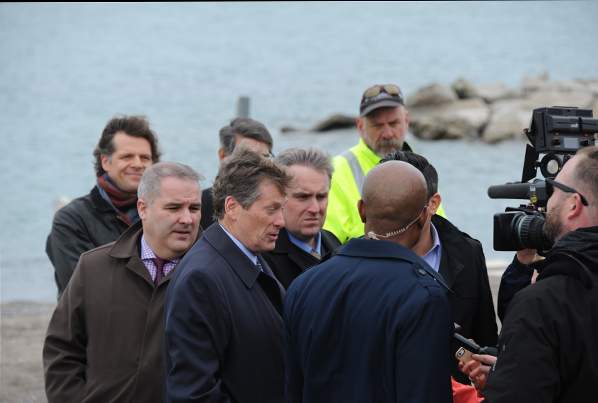 As the skies grow more grey by the minute, the city is taking steps to anticipate the impact of more heavy rain on the already battered lakefront.

“City of Toronto crews are preparing for rainfall that is expected to start later today and add significantly to Toronto’s existing high water levels,” said a news release sent out by the city, around the same time Mayor John Tory was touring Woodbine Beach, this morning. “The City and agencies including the Toronto and Region Conservation Authority (TRCA) are working with residents to prevent or minimize flooding and related problems.”

A rainwall warning issued by Environment Canada has predicted rainfalls of between 40-70 millimetres between now and Saturday, with more than 100 millimetres accumulated since the beginning of April.

“Rainfall (such as that being received today) will continue to be one of the primary factors over the next several weeks affecting the lake’s levels,” said Rob Caldwell, Manager of the Great Lakes – St. Lawrence Regulation Office. “But we remain hopeful that the lake will peak any time between next week and the beginning of June. It is very hard for us to tell how much higher the lake may rise, but current indications are that it should be less than about 10 cm or so unless very wet weather continues for the next several weeks.”

In the meantime, plans are in place for the potential evacuation of Toronto Island. All city residents are being asked to stay clear of rivers and streams and take precautions to protect their properties.

Wynna Brown, strategic communications with the city, said that crews from the city and TRCA have installed armour rock and have been sandbagging parts of the beach.

Still, she said the city is warning residents to remain vigilant and said that “all parts of Toronto can be affected by flooding and there may be little or no advance warning that localized flooding is imminent. Flooding is most likely to occur in areas that have historically experienced frequent flooding such as the Don River Valley, the eastern and western beaches, the Toronto Islands and other lakefront/shoreline areas.”

The cost of the impacts of the rising water levels and subsequent flooding has not been determined, she said.

The city “may not know until later on if it’s something that can be covered under the current operating budget,” she said, noting that much of the final numbers depend on the weather still to come and the potential damage that could come with it.

Already, the dock at Leuty Lifeguard Station has been destroyed and the shoreline along Woodbine Beach, including around the volleyball courts, has been eroded. City crews have been working throughout the past two weeks to mitigate the impacts.