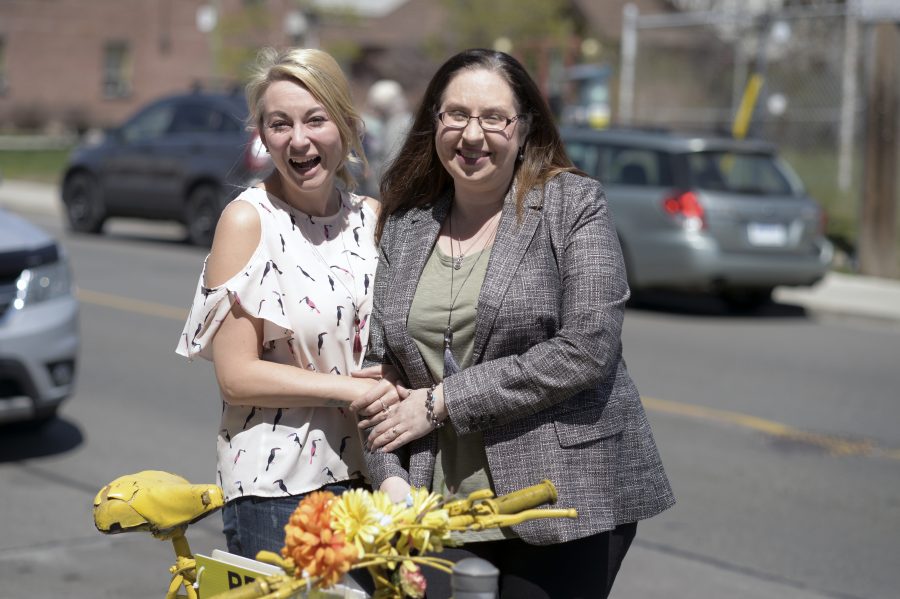 Now in its 23rd year, the twice-yearly Beach Studio Tour – once in the fall and once in the spring – is a self-guided showcase of artists and their studios.

This weekend, from May 5-7, 25 artists will be on-site for the Spring Beach Studio Tour at 15 stops in the Beach neighbourhood. A Beach institution, with its yellow bikes scattered throughout the neighbourhood, art lovers from all over the GTA descend on the Beach to celebrate the art created by this community.

One of the most intriguing aspects of the experience might be the logistics of concentrating dozens of artists and their work in a walkable area.

Seventy-two hours with, in some cases, a near-stranger could be a recipe for disaster, especially when you consider that most artists tend to work best alone.

But somehow, over the past two decades, organizers of the Beach Studio Tour have developed a knack for matchmaking – and nowhere is that more clear than with the pairing of Danielle Ward and Louisa LaBarbera, this year hosting their third tour out of Ward’s house on Courcelette Road.

A year-and-a-half of friendship might not seem like a lot – but spend 15 minutes with the sentence-finishing pair – Ward a painter and LaBarbera a jewelry maker – and you’ll be convinced.

To hear them tell it, their relationship is kismet and complementary, friendship at first site.

“We’d never met, we’d been put together by Nathalie [Vachon, a local artist and tour organizer], who thought we’d get along,” said Ward, recalling their first fall tour together a year-and-a-half ago.

She invited her new housemate over for wine and planning – LaBarbera had been on the tour before, but it was Ward’s first so she wanted help with setup.

“We sat in my kitchen for three hours and chatted and laughed,” said Ward. “We had one piece of paper at the end, and it said, ‘napkins and wine.’ That was our list.”

Louisa cracks up, “I mean, we did have napkins and wine at the party.”

The Friday night of the tour is meant to be a social. Wine and cheese greet guests at many stops, setting the festive and inviting mood for the weekend. A welcoming atmosphere is crucial, and having artists who genuinely like and support each other is a big help, in terms of giving the viewer a memorable experience where they can truly get to know the artists, which in turn helps get the artwork out into the world.

“I have the best neighbours in the world,” said Danielle, about her street – one of more tucked away pockets of the tour. “I get the whole street from top to bottom coming through the house … It’s pretty great.”

Ward and LaBarbera agree that a successful tour stop is more than just snacks and smiles.

“You have to learn a little bit about each other’s work, so when you leave the room, you can help sell each other’s stuff,” said Ward. “Louisa hears me talk about my particular painting about 400 times in a weekend. If I have to take a break, I come back out and she’s telling the exact same story that I’ve been telling. You just help each other.”

That type of support goes beyond the three days of the tour. Ward helped LaBarbera plan her wedding, using her calligraphy skills to help with invitations and signage. In their practices, the two are constantly checking in with each other – and often find eerie similarities in subject matter or colours of new pieces they are working on, further supporting the idea that their friendship is meant to be.

That type of support is indicative of the Beach arts community as a whole, and a reason the tour has lasted as long as it has.

LaBarbera said she has always felt welcomed by the Beach community, from her first job at Beadworks right out of high school, where she worked on developing her talent, to the first store to sell her jewelry, a hair salon on Queen East.

“It’s such a tight-knit neighbourhood, it’s great to be an even bigger part of it by being with the tour,” said LaBarbera. “It’s been a great calling card.”

Ward’s connection to the Beach goes back four generations – she said she was ecstatic when, after a number of years applying, her work was “after many kicks at the can” accepted to be a part of the tour.

Both agree that the only downside is that when you’re a tour artist, you have limited – or no – time to explore the rest of the tour.

But the lead-up to the tour offers plenty of time to mingle and connect with other artists. LaBarbera said one thing people might not know about the tour is that it is all volunteer-run.

“We don’t just pay our dues and show up day-of. We’re all working hard,” she said. “There’s constant support.”

While working on the logistics, many artists are simultaneously working on finishing new pieces and collections. “The tour definitely gives you a deadline,” said LaBarbera.

LaBarbera said she’s inspired by materials, items she finds at antique sales and thrift shops, like tassels she has collected over the years and recently turned into upcycled on-trend pieces in her new collection.

Ward, whose work ranges between streetscapes, landscapes and portraits, is debuting pieces that are more abstract. She documented her process to share with her guests.

“There’s a lot of love in everything,” said Ward, considering her inspiration, and that of her friend. “She’s so in love with her husband … I’m inspired by my family, my kids, places we go together. We both just love pretty things.” She teaches art to kids during the day (note: her son, Carter, was the winner of our inaugural holiday art contest), and said that experience is a well of inspiration.

“I learn more from them than they from me,” she said. “I just watch the way they fearlessly go for things.”

The Spring Beach Studio Tour runs Friday, May 5 from 6 to 9 p.m., Saturday, May 6 from 10 a.m. to 6 p.m. and Sunday, May 7 from 11 a.m. to 6 p.m. Maps are available at shops throughout the neighbourhood and by visiting www.beachstudiotour.ca

Hi Allyson,
Thanks for the comment. For the most part, we follow the Canadian Press style guide, which spells it jewelry. If it helps, it’s always bothered me that they spell it like that.
Anna