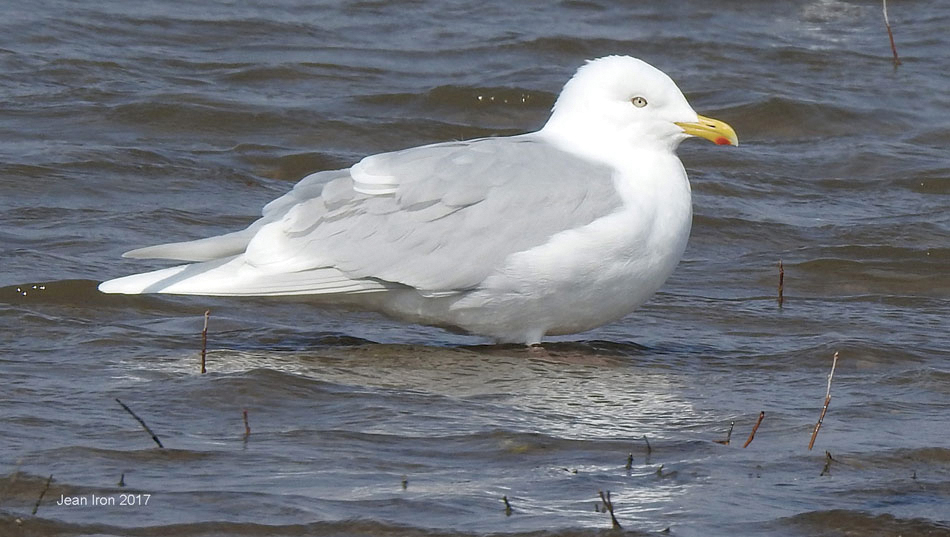 A rare nominate glaucoides Iceland Gull is seen at the flooded area of Woodbine Beach on April 15. PHOTO: JEAN IRON

The recent high water levels at Woodbine Beach may have raised concerns for some in the community, but for enthusiastic birdwatchers it has raised interest in the wildlife that has found the flooded areas to be the perfect spot for a migration pitstop.

The flooded area to the west of the beach has been attracting many gulls, particularly some that are somewhat rare.

The majority of gulls seen in our beaches are ring-billed gulls (Larus delawarensis), easy to identify by their black “ring” around their bill. The other species often seen is the herring gull (Larus argentatus), a larger gull often with a red subterminal spot on its bill.

The ones in least numbers are the Iceland gulls (Larus glaucoides), which are officially split into two subspecies, the Kumlien’s (L.g. kumlieni) and the nominate glaucoides Iceland gull (L.g. glaucoides).

It was the nominate glaucoides that had birdwatchers from Toronto and afar coming down to the Beach for a closer look. This subspecies breeds in Greenland and is a very rare visitor to southwestern Ontario.

This is unlike the Kumlien’s which breeds in northern Canada and is often seen in the southern regions of the province in the winter.

To add to the gull variety at Woodbine Beach, a couple of Thayer’s gulls (Larus thayeri) were also observed. Some ornithologists argue that the Thayer’s may very well be classified as a third subspecies of the Iceland gull, and usually winters in western Canada.

Jean Iron from Toronto, who was awarded the Distinguished Ornithologist Award from the Ontario Field Ornithologists in 2016, was excited about the find.

“We had the whole spectrum [of Iceland gulls]. From the pale ones from Greenland to the Thayer’s gull from the high western Canadian arctic,” said Iron who counted at least 14 Iceland and Thayer’s gulls on April 18.

“It’s certainly phenomenal,” said Iron adding that “it’s absolutely perfect [habitat] for the migrating shorebirds because it’s shallow and muddy.” She doesn’t see the flooded area as a major concern and welcomes this natural occurrence.

Soon these birds will move on to their breeding grounds in Baffin Island or, in the case of the nominate glaucoides, Greenland. But if the rains keep coming, you may still have a chance to challenge yourself and try to spot one.