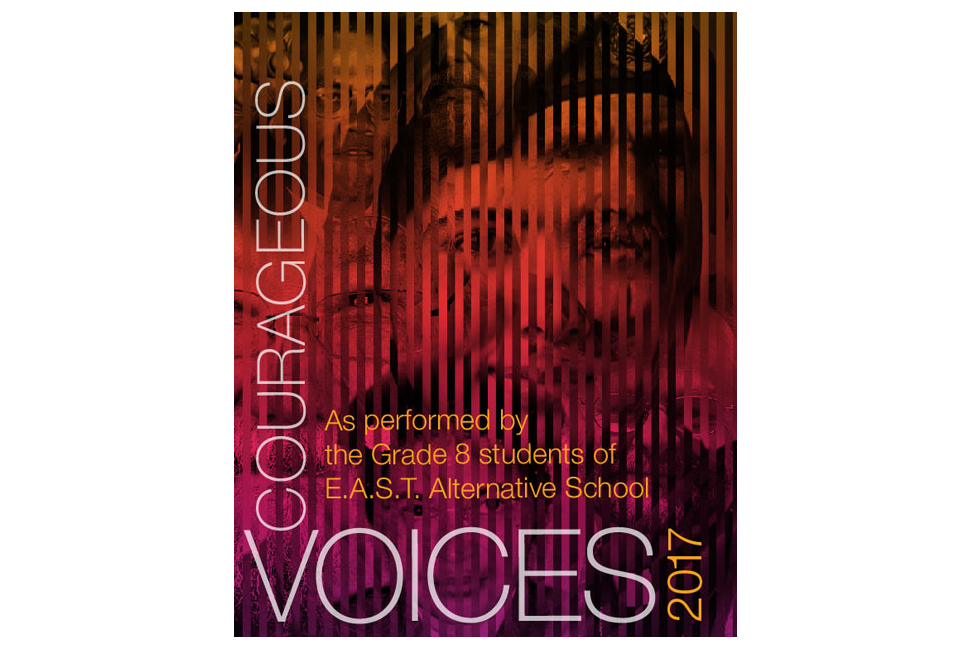 The students have spent the year working on a project that will culminate in a final play called Courageous Voices. The concept of the play is inspired by Joseph Campbell’s book, Hero with a Thousand Faces, which was first published in 1949 and examines the theory of the monomyth, or the journey of a hero. Campbell believed that classic heroes always followed along the same path: going on an adventure, winning a victory in the midst of a crisis, and then coming home transformed or changed.

“We always looked at Joseph Campbell’s Hero with a Thousand Faces,” she said. “His definition is the definition we use for the hero/heroine. We’d get dressed up and we’d always make these life-size portraits of [the students chosen] hero/heroine.”

From there, it developed into a monologue, and later into the musical rendition that it is today.

For their part, the Grade 8 students were tasked with researching and writing an essay about people who they believe to be heroes or heroines “and they read the essay and the class votes – are they a hero/heroine? And if they’re not, they’re back to the drawing board. We have to have a global definition and that’s the one we’re using,” said Heath.

Once they have settled on their characters, they will embody the person they chose to write about in the performance.

“Each year we ask the children if they want to do this – because it’s a lot of work – but every year they say they feel people need to hear these words, and at the end they always say they feel really empowered that they’ve made a difference,” she said. “What’s very cool is the story behind the story because there are students who have never been on stage in their life and they’re terrified but they love their hero/heroine so much they want to get the words across. It’s a message that they want you to hear.”

Heath believes encouraging this kind of engagement is particularly important today because “kids are feeling hopeless.”

“It’s a scary world,” she said. “The things they’re saying are scary. They’re aware of these things [going on in the world] and they’re frightened and what Courageous Voices does is it confronts the problem and [shows how] these people have done things differently and really impacted the world.”

And according to Heath, the lessons from the experience extend far beyond the walls of EAST.

“A number of students come back in high school and say when things get hard they play back the words they spoke in Courageous Voices to get them through it.”

Although Heath will be retiring at the end of this year, she says she’s as committed as ever to the program.

“I’ll be coming back to EAST in an advisory capacity so I still will be here for sure,” she said. “I’ve been here since it’s beginning and it’s something that I love.”

The play – which will take place from 7 to 8:30 p.m. on April 26 and 27 at EAST, 21 Boultbee Ave., and from 7 to 8:30 p.m. May 3 at the Metropolitan Community Church – will feature musical performances, engaging conversations and “an incredibly moving production,” described parent Hugh Scholey.

Tickets are pay what you can but the suggested donation is $10 per person.