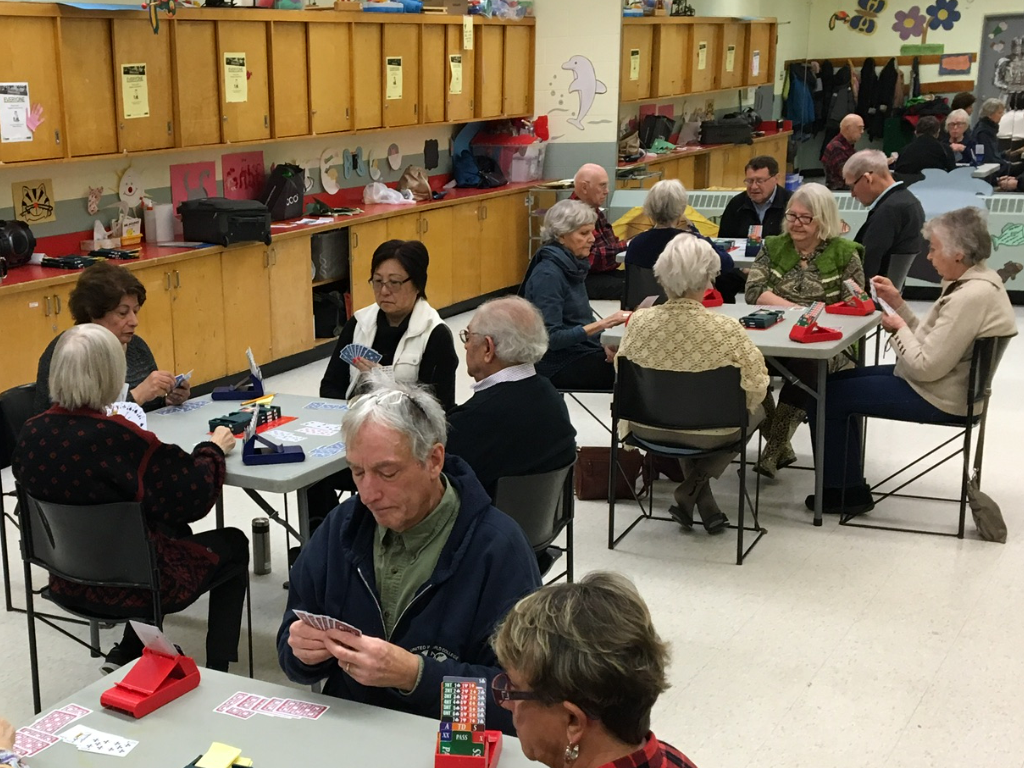 A few people are standing in the hall on the second floor of the Beaches Recreation Centre on Williamson Road, waiting for Room 4 to become available. Someone peeks in.

“No, not yet,” Franco calls frantically. He is setting up the room. As soon as the little kiddies left, Franco began setting up the tables and chairs for morning bridge.

“Leave your boots in the hall, please,” comes Gaby’s unequivocal request. “The children play on the floor,” she adds, by way of explanation. Boots come off and are placed on the mat in the hall. No one wants to mess with Gaby.

Franco exits and invites the waiting bridge players into the room. “Is this okay?” he asks, pointing to the placement of the tables and chairs. It is fine and the early arrivals file into the room. It’s a small but dedicated group, these bridge players. Anywhere from 12 to 20 participants get settled in to play duplicate bridge from 10:30 a.m. until just after 1:00 p.m. at the community centre on Friday mornings. The free community program takes place under the auspices of the City of Toronto. It has been going for two years.

“You have no partner? That’s no problem.” Peter ensures that every person walking into the room will play bridge that morning. They are players of all levels. Some are beginners, some have master points. Some bring a playing partner, some come on their own and are matched up by Peter, who functions as the coordinator. If there is an odd number of players, he plays; if there is an even number of bridgers, he helps out and keeps everyone honest.

Some time in 2015 the players agreed that the game would be more interesting if they played duplicate bridge. Duplicate bridge requires some aids, such as movement cards, bidding boxes, boards for holding the cards and score sheets. A voluntary collection brought together enough money to purchase these items. As the group expands, additional “tools” are acquired. To finance this, every player pays one dollar each time they come to play. This is a voluntary contribution, as the bridge program is free.

At the end of each session Bob collects the score sheets and tabulates the results on a spreadsheet. Later that afternoon he mails the results to your writer, who then forwards them to all the players, whether they were there that day, or not.

The Friday bridge group is a friendly and tolerant bunch and very welcoming to newcomers. There is room for expansion and if you would like to brush up on your rusty bridge skills, or simply enjoy a few pleasant hours of bridge, you may want to consider joining us. The current session runs until some time in June.

In the previous two summers the group moved to Kew Gardens, near the gardener’s cottage, where they joined a city-run summer program. Playing outdoors and having a lunch served for $1.00 proved to be a pretty attractive deal.

For further information, consult the Community Calendar. Ada Spanjaard is an enthusiastic member of the bridge group.