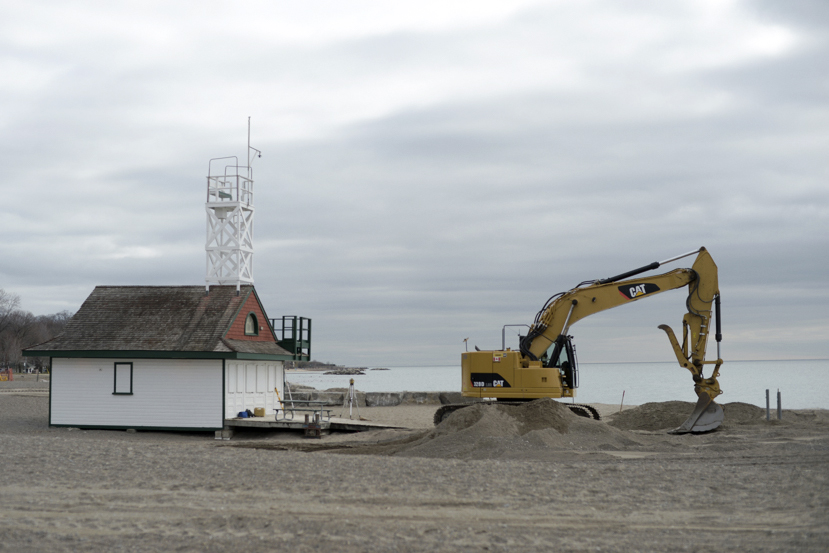 City workers are at work moving sand around the Leuty Lifeguard Station. The shoreline along the Eastern Beaches has risen higher than it has in decades. PHOTO: Anna Killen

Residents have been voicing their concerns over the past weeks about the rising water levels along the shorelines of Ashbridges Bay and Woodbine Beach but it’s the historic Leuty Lifeguard Station that is currently raising alarm bells with the City of Toronto.

“This may have an impact on the beach and the volleyball courts in the long-term, but more urgently, this has threatened the 97-year-old Leuty Lifeguard Station and the Boardwalk,” said Matthew Cutler, spokesperson for the city’s Toronto Parks, Forestry and Recreation department.

While shorelines have been known to evolve over time, Cutler explained that “recent storms have brought waves further onto Woodbine Beach and Ashbridges Bay than we have seen in decades.”

The city constantly works to manage the waterfront by building break walls, dredging and strategic planting in an effort to minimize changes to the shoreline but to mitigate the current issues creeping up on Leuty Lifeguard Station and the boardwalk, “staff are working with the Toronto Region Conservation Authority to secure these two assets by moving sand and installing armour stone,” said Cutler. “Once that work is complete, we will review the broader impacts these storms will have on the beach.”

In the meantime, city staff are asking people and their pets to stay away from the water.

“Standing water can often pose concerns, especially when combined with animal and bird feces and heat, like on a beach,” said Cutler. “We’ve asked that residents (and their pets) stay away from the water and our machinery on the beach while we deal with these issues.”

I do believe that the circle between the change rooms around the volleyball court over to the point should be partially dredged out to put that area of the beach to where it is somewhat use to be like to surround 20 years ago I estimate.

I would take it that a lot Sandy soil is being washed out from further ease along the Ontario shoreline. And because of the cove it accumulates there and takes away the lake area that one have contained the lake water in it proper or natural environment of the years back. A pound of prevention is a year of cure which the dredging said have been an ongoing process over the years. Storm are getting worse and yes something drastic needs to be done.