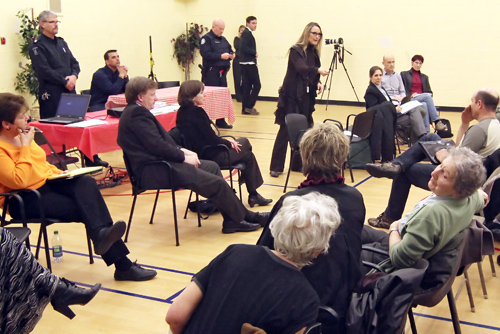 In response to growing concerns about coyotes in the East End, the city is hosting an education session tonight, April 10, at the East York Civic Centre.

Residents have been speaking out about coyotes encounters since last fall when several pets were attacked or went missing and the Toronto Humane Society initiated a campaign to track a coyote thought to be a concern. Some residents were calling on government to take action. Now, the City of Toronto’s Animal Services division is launching a campaign to help educate residents about city coyotes.

“Toronto residents who live near ravines and forests — typical coyote habitat — can expect an increase in coyote sightings during the winter,” reads a city release. “Coyotes are active day and night, but prefer to hunt at dusk and dawn.”

Guest speakers from the Ministry of Natural Resources and Forestry, Toronto and Region Conservation Authority and Coyote Watch Canada will talk about coyote behaviour in the urban environment, the fish and wildlife conservation act, and co-existing with coyotes in Toronto.

This isn’t the first time coyotes have been a topic in the neighbourhood. Similar concerns were reported in 2013, and before that in 2009. A coyote was killed on Queen Street East in 2014. A public meeting similar to the one tonight was held in 2013.

Tonight’s meeting runs from 6 to 8 p.m. at the East York Civic Centre at 850 Coxwell Ave. Residents can find more information at toronto.ca/coyote or by calling 416-338-7297.

At the meeting the ‘experts’ did a good job educating about coyote biology and how critical it is not to feed them but continue to fail to take action against the feeders. This is helpful to residents newly exposed to coyotes in their neighbourhood, but that inaction enables the coyotes to comfortably entrench themselves in our neighbourhood and keep killing our pets (since 2009). The ‘coexistence’ our city staff and Coyote Canada repeatedly stress is very one-sided in favour of the wild predators who rule our backyards.
Our city officials have the science, the tools and the authority to act but are still failing to lead.
They need to finally step up.