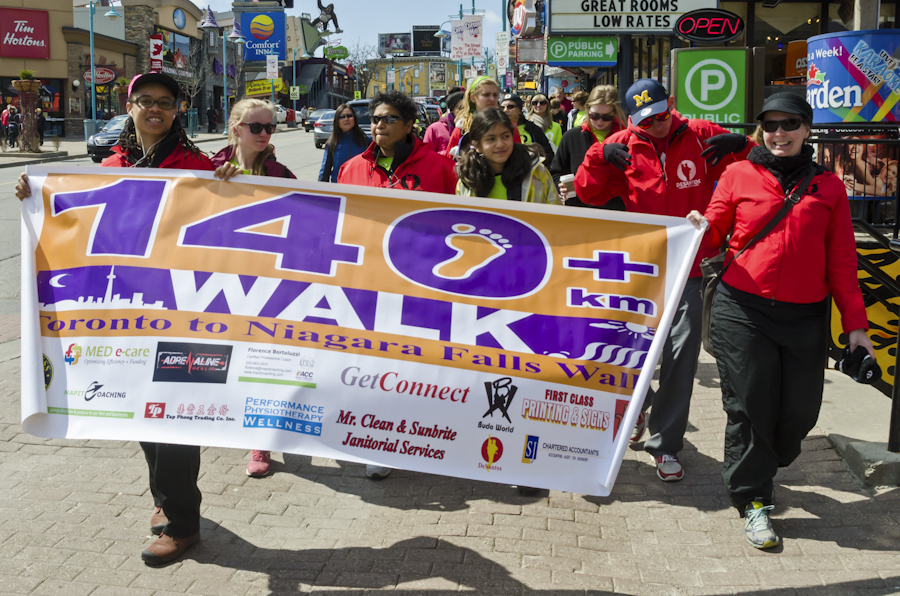 Giving back has always been a priority for Veronica DeSantos, owner of DeSantos Premier Martial Arts, seventh-degree black belt and founder of the DeSantos Foundation.

As a young child, she would organize events in order to raise money. But after moving her business to the Upper Beach about 10 years ago she began to focus on working with organizations to help raise money and give back to those in need.

“A couple of times we’ve done things at Centre 55 and we will ask if there’s a list of families who need help and we will do our own basket of food and deliver it,” she said. But one day, she decided it was time to lead her own initiative – a vision that continues this year with a walk from Toronto to Niagara Falls from April 18 to 21.

Back when DeSantos first started her foundation, she decided she would raise money by riding her bike to Niagara Falls in one day. Two students ended up joining her on the journey and although she said the ride was fine, she did note that “we should’ve done it in two days rather than one. We left here at 6:00 a.m. and got there at 10:00 p.m.”

She also decided that the ride didn’t create the kind of bond that she wanted to reinforce during a fundraiser.

Walking, on the other hand, would allow people to talk along the way, share their experiences and get to know one another on another level, she felt.

DeSantos said four people joined her on that first walk six years ago.

This year, she anticipates between 35 to 40 people will participate in the walk with about 15 walking all four days (participants have the option of walking one, two, three or four days). Each walker has been encouraged to raise $250 with the goal of raising $20,000 in total.

So far, they are almost halfway to their goal.

The funds raised will be split between a few organizations but DeSantos said “one of the main things that we do is we help kids at school [and] we go to schools that aren’t getting the same kind of help, so we did an alternative school downtown and we gave a couple thousand dollars to them, and we have a non-profit basketball organization that needs help. In the Philippines we have a school … $500 feeds a school for a year.”

The DeSantos Foundation works with Adhika – a non-profit organization supporting Filipino communities at home and abroad – via CanadaHelps, and because DeSantos is a native of Guyana, she said they provide help there as well.

“What we do in Guyana is [help] kids – if you don’t have a uniform you can’t go to school,” she explained. “It’s hard for kids in very rural areas, they don’t have the access or money. So $50 will send a kid back to school.”

DeSantos said they buy them a pair of shoes, a full uniform, a backpack and a pair of socks and “we celebrate. We don’t just give them the bag because having a pop and some treat of cake is a big deal for them so that’s what we do. And we don’t just go and buy any pair of shoes. I want the shoes to last the kids for the whole year because they only have one [pair].”

In the future, DeSantos said she would like to “help them with college and to go to university,” but clarified “that’s a long-term goal, I’m not there yet. Before, it was just straight from our heart and … we need to be a little bit more organized. The next stage is, I will pick up the kids for scholarships there.”

In the meantime, she said it’s been heartening to see how much the students and parents have been embracing the walk and getting involved in the foundation.

“People walk four days. Wow! I feel excited, I feel privileged,” she said. “It’s like a walking meditation. It’s very emotional at times. It’s more than a walk, for sure.”

For more information about the walk or to donate to the DeSantos Foundation visit walk.desantos.ca