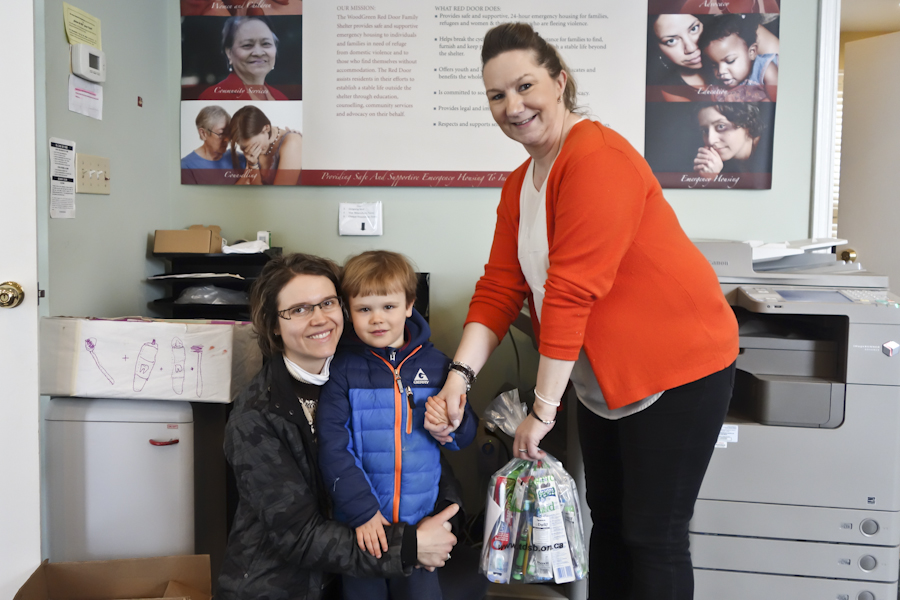 He may be four-and-a-half years old, but Gabriel Harlow, a junior kindergarten student at Earl Haig Junior Public School is already stretching his philanthropic muscles.

Natalia Harlow, Gabriel’s mom said it was late November when he thought of the idea to start a toothpaste drive.

“We were just talking at dinner one day and Gabriel just said, I want to collect toothbrushes and toothpaste for people who don’t have any.”

Natalia said there were a couple of drives happening at the school but the idea was largely out of the blue.

Gabriel, however, said he got the idea from a conversation about shelters. The thought of children his own age having nothing immediately made him want to act. “So one time my mommy was just talking at the table then suddenly she said, ‘shelters,’ and that made me know about people that didn’t have toothbrushes and toothpaste,” he said. “And that made me capture that idea in my mind.”

Although Natalia said she had no experience organizing a drive, she was more than happy to rise to the occasion and ensure they could make Gabriel’s dream of helping others a reality.

“I’ve never done anything like that myself and I just thought it was a great challenge,” she said. “It was so pure and so helpful so I really was happy to. I had no idea what I was doing but I was happy to just get into it and figure it all out.”

The pair initially aimed to collect approximately 600 items – roughly the same amount of items as the school’s population. Although they just missed the mark, collecting a total of 490 items including 261 containers of floss, 98 tubes of toothpaste and 131 toothbrushes, the overall fundraiser was a huge success and the pair hope to do it again next year.

Natalia said the school has been very supportive in helping the fundraiser come to fruition and has advertised the drive on their Facebook and Twitter pages, as well as over the announcements. Dentists in the community including Dr. Kathleen Schenk, Coxwell Dental Health Centre, Altima Dental and Dr. Mark Alexis were also helpful in donating extra supplies.

On March 24, the donations were given to the Red Door Family Shelter – a group Natalia thought would be perfect because of the fact that there are often children around Gabriel’s age who live in the shelter.

“They were very happy to see us and very grateful,” Natalia said after they dropped off the items. “And [they] prepared a beautiful thank you note for Gabriel,” she mentioned, noting her appreciation for this because “I’m really trying to make it a positive experience to encourage it so he’ll do it again in the future.”

Luckily, It doesn’t sound like that’s a far-fetched idea. Gabriel is eager to show off his letter and certificate showing his contribution to the Red Door Shelter and Natalia said he already “said he wants to do more drives.”