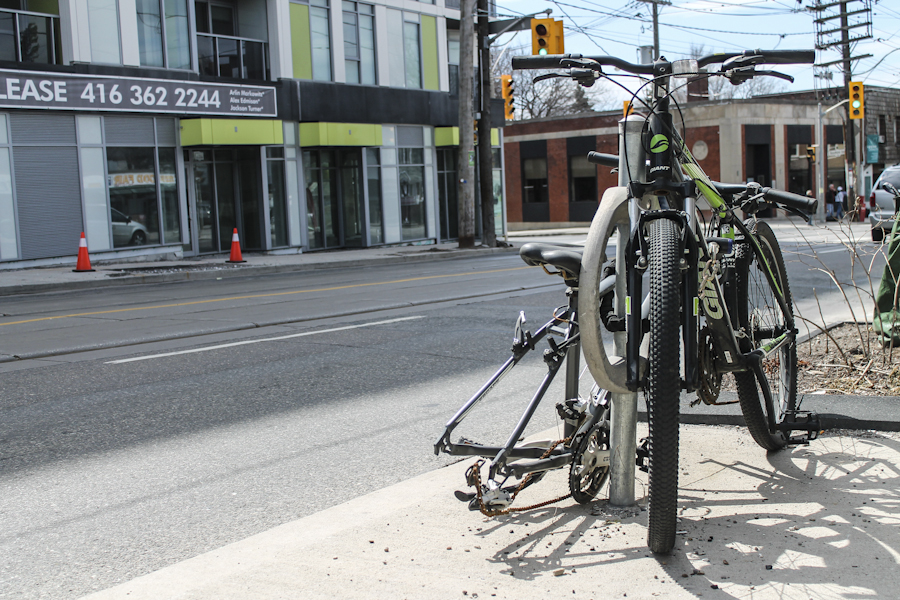 A bike sits chained to a stand at Woodbine and Gerrard. PHOTO: Lara O'Keefe

For many, the arrival of spring – however soggy – means the arrival of cycling season. And in the East End, bicycles are on the brain with last year’s news of the Woodbine bike lane approval and, more recently, the planned installation of a bicycle rental concession at Ashbridges Bay.

But when it comes to available biking services, the East End has remained largely behind its downtown and west end counterparts as the city moves towards becoming a more bike-friendly community.

“I’ve always been a big fan of animating our waterfront and allowing the opportunity for anyone to come down and enjoy it,” said ward 32 councillor Mary-Margaret McMahon of plans for a bike rental concession similar to the one on Toronto Island.

After the demise of Bixi bikes, which at one time had committed to a three-year presence in the Beach, McMahon said it has been difficult to gain traction on the installation of bike shares in the Beach area again.

Bike Share Toronto, which has been in the city since 2011, today has approximately 200 stations across the city – around 80 stations were added by the end of last summer – but none further east than Leslieville (near Carlaw Avenue), or south of the Danforth.

According to Jared Kolb, executive director of CycleTO, “the rationale for including Danforth first as the kind of expansion further east beyond the Don [Valley] has to do with the integration of the subway system. It’s kind of a start but it’s not near the concentration that we need in the East End,” he said.

However, the current lack of bike rentals in the East End hasn’t been lost on CycleTO.

“I think from CycleTO’s perspective the expansion along the waterfront is a high priority and it’s certainly something we want to see happen,” he said, making note of the fact that in terms of transportation, cycling is an important part of the mix and bike shares are an essential ingredient, particularly because “Bike Share does a really good job of filling the gaps. Especially for diagonal trips or trips that are too long to walk but too short to take conventional transit.”

With membership fees sitting around $90 per year or $7.00 a day, renting a bike for a short trip (trips longer than 30 minutes incur extra charges) is arguably cheaper than driving and taking transit, and more eco-friendly (see sidebar).

Research has also shown cycling to be beneficial to the local economy. According to a study conducted by Ryerson University for the Toronto Centre for Active Transportation, cyclists spend 24 per cent more per month than those who drive. The only exception to this rule, noted Kolb, is in the case of the conventional grocery store.
But for the many locally-owned businesses along the Queen Street East strip, that additional 24 per cent could be a game-changer.

In terms of bike lanes, a report by PeopleForBikes and the Alliance for Biking & Walking states that there are four key ways that protected bike lanes help to encourage economic growth.

“Land is more valuable if more people can get to it easily,” the report states, making note of the fact that urban centres are seeing substantial increases in population and with it, increases in motor vehicle congestion. Protected bike lanes help to ease this congestion making it easier for residents to move freely and safely on the streets. Additionally, installing bike lanes has shown to aid companies in finding talent, employing healthier and more productive staff, and as mentioned above, can increase retail visibility and sales volume due to the fact that cyclists will buy less at one time but visit more often, thereby spending more money.

“When we’re talking about main streets in cities across North America, in virtually every business type, the cyclists are spending more money than people who arrive by car,” stated Kolb. “The benefits that cycling has for local business, they’re significant and the literature has been pretty strong in that area.”

However, not all business owners are convinced that bike lanes help stimulate the local economy. Doug Miller, owner of Doug Miller Books on Bloor Street West, which is in the midst of a bike lane pilot project, said the “bike lanes were put in in August and there was an immediate decline in business.” He said he believes part of the reason for this is that the bike lanes are used primarily for commuting rather than facilitating a stop and shop environment in his Koreatown neighbourhood.

Miller also pointed out the increased traffic along Barton Avenue, attributing this to a diversion of traffic from Bloor West because of the bike lanes.

“Those cars are still driving, they just drive elsewhere. If you talk to the people on Barton Avenue it’s hellish at certain hours of the day. So the traffic is just avoiding Bloor and going elsewhere,” he said.

Back in the East End, Kolb said the installation of the Woodbine bike lanes will most likely be taking place in June. Time will tell for the Bike Shares.

A spokesperson on behalf of Motivate, the company behind Bike Share Toronto, said they do not have any expansion plans they can share at this time.

McMahon said she is going to “continue to push for Bike Share to come to the Beach and the rest of the ward, but in the meantime, let’s not wait (referring to the rental concession).”

It may seem like a small concession in the scheme of things, but to fans of city cycling it is a step – or should we say peddle – in the right direction.

In the meantime a bicycle rental concession aimed at tourists is no substitution for a Bike Share Station for local commuters.
Beach residents need better options to reduce the environmental impacts of their commutes now. I have long been shocked by how many of my neighbours choose to drive the short distance to downtown. There should have been a Bike Share at Woodbine Beach for years now. I am left wondering if the proposed Bicycle Rental Concession has anything to do with the lack of Bike Share options in our neighbourhood.

“I have long been shocked by how many of my neighbours choose to drive the short distance to downtown.”

Downtown is nothing. I have long been shocked by how many of my neighbours choose to drive the short distance to Queen Street!

“…but none further east than Leslieville (near Carlaw Avenue), or south of the Danforth.”
There are three BikeShare locations in the Main and Danforth area – Westlake and Danforth, Stephenson and Main and at Main Square.