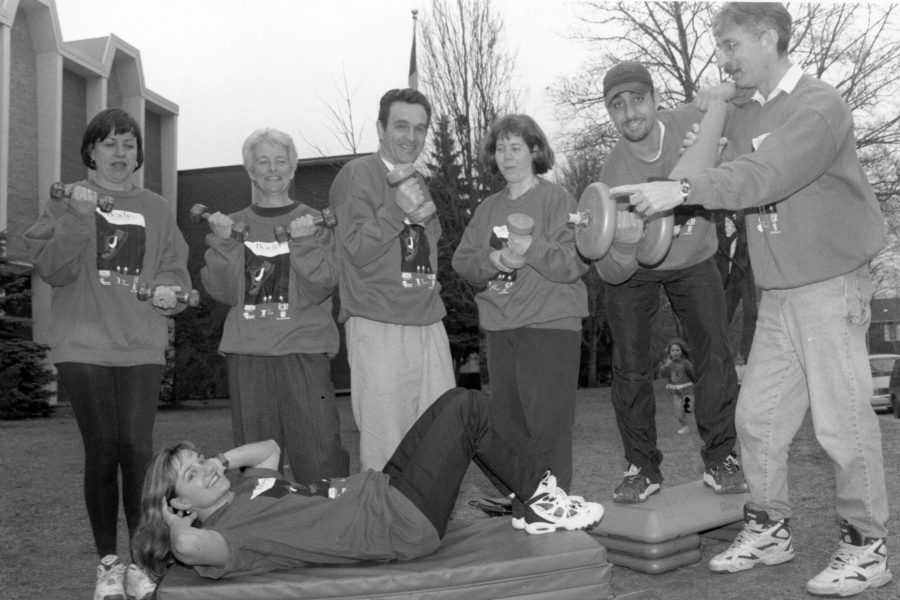 To those familiar with how things work around here, it should come as no surprise that the Beaches Spring Sprint began with Gene Domagala and a megaphone.

A fixture at the now annual race, which turns 30 this year, the unofficial Mayor of the Beach helped launch the fundraiser in June 1987, by trying to “recruit various and sundry to the race with a megaphone.” That year, 10 runners participated – most of whom were the children of members of the Beaches Advisory Council and some who are still part of the now hundreds of people who run the race today.

Back then, the race was called the Dash ‘n Splash, as the runners ended by jumping in the Summerville Pool. Council member Edna Houston renamed the run the “Spring Sprint” when the race was moved to a date in early spring.

“The race started as a ‘coming out’ from winter to see family and friends with a little exercise and proceeds to youth and senior programs at the centre,” said David Breech, whose Eagle Beaver Sports is a longtime sponsor.

The ‘centre’ is the Beaches Recreation Centre. The event, which raises around $10,000 each year, is the major fundraiser for the centre and is organized by the centre’s advisory council. Part of the race’s charm is that to register, runners have to visit the space on Williamson Road – a move that started years ago out of the necessity to manage crowds but proved to be important in showing the heart of the organization to the surrounding community.

“You get a sense of the place [you’re supporting], the people we can accommodate,” said Criss Hajek, who has been on council for about a decade. “If you’re new to the community and you didn’t know the programs… The Beaches rec centre is the heart of the community.”

The race is as fun and accommodating as the centre it represents –  it’s a five kilometre “your way” walk or run, with two kilometre categories for children and seniors, and often sees participants decked out in costume. The race starts at the bottom of Silver Birch Avenue –  just east of the Balmy Beach Club in front of the boathouse –  and attracts between 400 to 600 participants each year, with the youngest “runner” in history being two years old (there are often children pushed in strollers) and the “most experienced runner” going to 88-year-old Yvonne Walmsley.

After 30 years, the race has seen its fair share of memorable moments.

“We have experienced all weather conditions and still persevered,” said Breech. “The most memorable one happened when there was a storm and the boardwalk was covered with sand. Parks and volunteers worked through the night to clear and repair the boardwalk to allow the race to take place.”

Once, the race was postponed because of an ice storm. The boardwalk was covered with ice and volunteers had to phone each person registered and tell them the race was off, said Hajek. But fortunately, the next weekend was a perfect spring day with mild temperatures and blue skies.

The event is run by more than 100 volunteers and through the support of the community, including the Balmy Beach Club where the award ceremonies and BBQ are held each year.

Council member Susan Saab said “this truly is a ‘Beach’ event. Most of the volunteers come back year after year and some even come back when they have moved out of the community because I guess, ‘Once a Beacher always a Beacher.’”

But that doesn’t mean the event’s been without change. Council member Annikki Desmarais points out that today the event attracts a number of competitive running clubs from across the city.

“The event has changed and evolved through the years,” she said. “For a while (early 2000’s) the event had as many kids as adults participating! Most recently, we have competitive running clubs attending. The number of competitive walkers has declined but I hope that changes this year as one of the walkers offered to promote to walking clubs. Technology has also changed with the timers – used to be anklets a bit of a personal touch when checking in. Now they are attached to the bib.”

The colour of T-shirt is always a healthy debate amongst council members and volunteers, she said. This year, marking the 30th, the group decided to stick with a classic.

You’ll have to join the race Saturday, April 1 to find out.

Money raised through the Beaches Spring Sprint goes to support the Beaches Recreation Centre on Williamson Road. Here are some of the initiatives the race has supported, with support from the city, according to the centre’s advisory council: