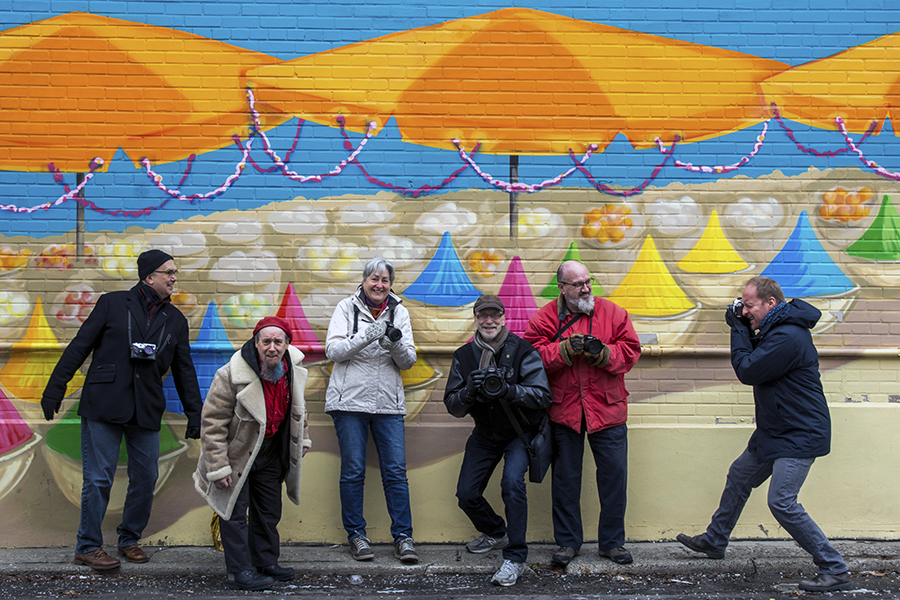 The photographers behind the Focus on Gerrard photography exhibition. PHOTO: Submitted

This month, the historic and burgeoning Gerrard Street East community will be in the spotlight with the Focus on Gerrard photography exhibition at Riverside Gallery.

The exhibition is part of Myseum’s Intersections Festival and will feature the work of six photographers, according to curator and photographer Sasha Furlani: Mary Crandall, Furlani, Harry Halyk, Jeff Stewart, Andrew Smith, and David Williams.

The final exhibit will showcase 33 different portraits and their corresponding interviews, just a portion of the more than 100 people interviewed during the artistic process.

Furlani said the artists were drawn to Gerrard East because of the immense change currently taking place across the city. With Little India being one of the most celebrated and well-known neighbourhoods in the city, “we were drawn to the idea of literally creating a document of this exact moment in the history of the neighbourhood. We weren’t interested in driving any particular agenda, but rather capturing the people that live, work, and play in this neighbourhood, and most importantly to interview them and provide them with the opportunity to talk about their neighbourhood, too.”

But despite the noticeable changes to the streetscape, Furlani said what stood out to them was the fact that “traditions can continue, even as places change.”

One particular example he gives is the New Town Restaurant at the corner of Coxwell and Gerrard, which has been open since 1948.

“The current owner took over a few years ago, and even though he wasn’t familiar with the tradition of the restaurant, when he took over he understood quickly how important the restaurant was, and still is, to the community,” said Furlani. “Rather than drastically making over the restaurant, he decided to keep it as is, make minor updates and adjustments, and otherwise trust that the connection to the neighbourhood is strong enough to support the business. And this is a sentiment we heard continuously as we met other members of the community.”

Pointing out the mix of old and new in the community, Furlani shared that what they found when speaking with residents of Little India was “a real desire to create a sense of community while still embracing and integrating with the vibrant culture of [the neighbourhood].”

With each of the artists practicing documentary style photography, their hope was to capture the stories and moments of the people who live, work and play in the area.