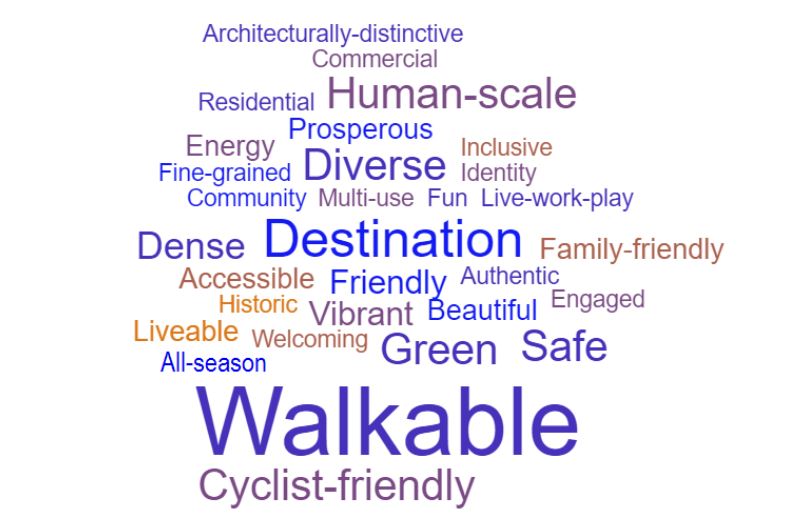 A word cloud created using words participants used to describe their vision for the Danforth at the first community meeting June 26, 2016. PHOTO: City of Toronto

A second public meeting will be held tonight, February 23, to discuss the future of development along Danforth Avenue.

Since last year the city, a consulting firm, and community members have had their heads together working on a planning study of the Danforth between Coxwell and Victoria Park Avenues, the first of two stretches of Danforth anticipating development. It’s now time for them to share their progress with the community and receive feedback, with a meeting tonight at the Danforth Mennonite Church at 7 p.m.

The study aims to “bring a lens of local character to development guidelines,” according to study materials, and once finished will result in new urban design guidelines and/or an amendment to the city’s official plan that will help guide development in the area. Community engagement is key to the process, with four to five meetings planned. Detailed meeting summaries are posted online.

The first meeting, at Hope United Church June 27, 2016, saw about 170 people attend. The community was asked a series of questions about what they liked about the study area and what they would like to see in the future. Public spaces, access to multiple modes of transportation, and small, independent and diverse retail emerged as the top three community assets, according to participants.

Since the initial meeting, there have been more informal meetings with the community to involve them in the process, through booths and farmers’ markets and community events. The study’s stakeholder advisory committee — a group of residents, landowners, business owners and others — had a meeting in October.

The study is expected to be completed with a report to council with recommendations by the end of the year.