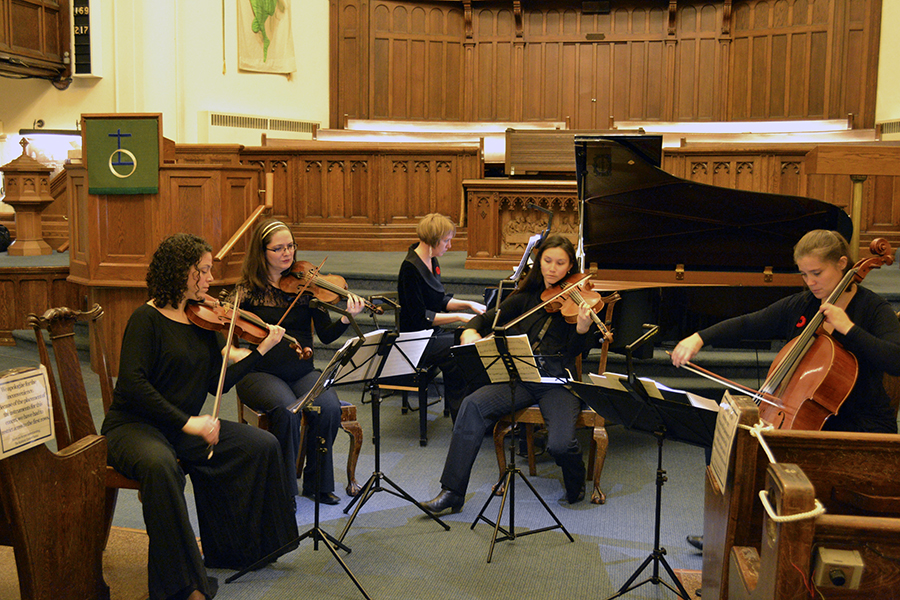 Over 300 people turned out to groove with jazz legend Jackie Richardson at the February Jazz and Reflection at Beach United Church, and organizers are hoping to keep the house full as the Saturday concert series continues.

Next up, under the theme of “Bridges”, Barry Livingston Group takes the stage Saturday, March 4 at 4:30 p.m.

Featuring some of the country’s best jazz and global musicians, the gang of six musicians draw eclectic influence from all over the world in bringing Livingston’s compositions to life.

Jazz and Reflection takes place at the Beach United Church on Wineva Avenue the first Saturday of every month from 4:30 to 5:15.

And if one night of jazz a week isn’t enough, next week the Salty Dog is offering two opportunities to see Pilo and crew.

Tuesday, Feb. 28 and Wednesday, March 1, go back to the good ol’ days of jazz with Perry White on sax, Reg Schwager on guitar Dave Young on bass and Pilo on drums.

The Academy Concert Series, now in its 25th year, explores the evolution that shook French music during the late decades of the 19th century and early 20th century with A Frankly Fabulous
Foray
, Saturday, March 4 at Eastminster United Church.

Featuring Leanne Regehr on piano, Alexander Read on violin, Elizabeth Loewen Andrews on violin, Emily End on viola and Kerri McGonigle on cello, the show moves from César Franck’s Piano Quintet in F minor to Gabriel Fauré’s late Piano Quintet in C minor, to shine a light on the period’s search for an authentic French voice and creation of a new aesthetic.

Eastminster United Church is located at 310 Danforth Ave. The show begins at 7:30 p.m. and tickets are $20, with senior, student and youth prices available.

Tired of the winter? The second annual Cold Weather Blues Festival has returned just in time to put some spring back in your step.

A group of Beach area pubs and restaurants have come together to host a slew of red-hot musicians and performers that include Sugar Brown, Paul Reddick, The Ever-Lovin’ Jug Band, and Lotus Wright among others.

The festival is slated to take place February 24 and 25 from 7 p.m. to 11:30 p.m. unless otherwise noted, and will be located at a number of different venues located along Queen Street East and Kingston Road.

For more information regarding venues and bands, visit www.coldweatherbluesfest.com With a swinging smooth sound and sense of New Orleans style, the Xcentric Jazz Band is a remarkable group of musicians who play traditional and Dixieland jazz throughout the Durham region. They have performed at the CNE, the Oshawa and Port Hope Jazz festivals, “Jazz for Jesus” concerts for several different United Churches in Oshawa and the Beach as well as many park concerts and garden parties.

Founded in 1996, the current ensemble features Ron Hamblin on clarinet, Kevin Cook on trombone, and Dave Hubbell on trumpet. Ron’s fondness of Dixieland shines through on both clarinet and tenor saxophone. Kevin is a freelance singer and trombone player, a music teacher and cruise ship musician. Dave confesses a lifelong obsession with jazz music. For more than 40 years he has played in concert, swing, and Dixieland bands.

For this Dixieland Jazz Vespers at Hope United Church on Saturday, Feb. 25 at 4:30 p.m., they will be joined by Brian Stevens on piano. For more information visit www.hopeunited.ca.

In news that shouldn’t be surprising to anyone considering the cost of neighbourhood real estate, two of the just-introduced Real Housewives of Toronto live in the Beach.

The area is set to be one of several stages for the Toronto spinoff of the popular reality TV show, which follows the lives of wealthy and glamorous “housewives” and places them in situations filled with clinking glasses and dramatic pauses. The cast for the show, which airs on the Slice network beginning in March, was announced last week.

Among the six cast members are Jana Webb, CEO of Joga (that’s yoga for jocks), and Grego Minot, wife of Pierre Jutras who runs the exclusive members-only Spoke Club. The two women are billed as neighbourhood friends – Webb has lived in the Beach for seven years, Minot for six – meaning Beachers should get a glimpse of some familiar places if they happen to tune in.