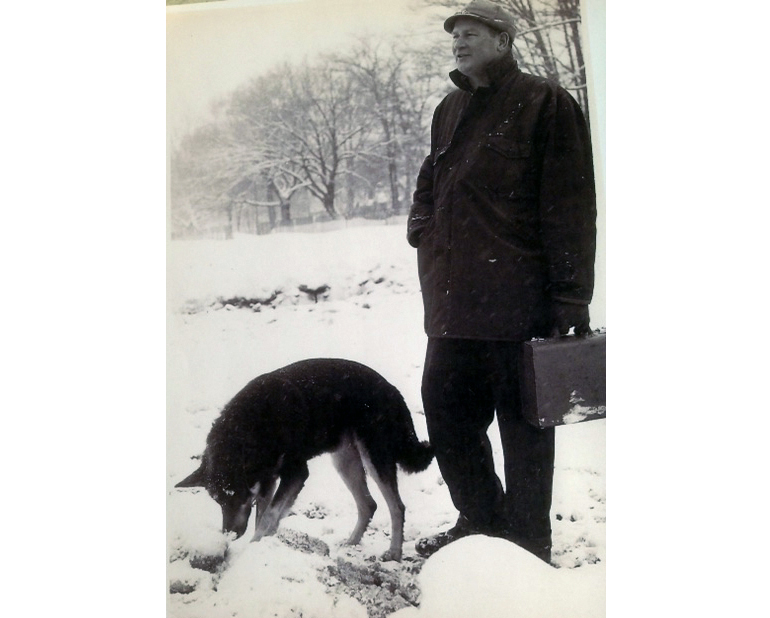 George "Joe" Davis with his dog, Duke. The case in his hand carried his camera and lens. PHOTO: Submitted

He was born in Toronto, lived his earlier years on Roseheath Avenue and attended Riverdale Collegiate. He married in 1942, joined the RCAF Bison Squadron 429 as a mid-upper gunner and flew 34 ops over Germany during WWII. He often remarked that the Halifax Bomber “was a damn good plane.”

He joined the Toronto Fire Department right after the War and retired – after 42 years on the job – as District Chief of Toronto’s East End, serving this community.

He lived in the same house, in the Beach, for 64 years, with his wife Margaret and three daughters. He loved living here. You would often see him up on a ladder taking down storm windows, or putting up screen windows to third floor neighbours’ homes.

He took great pride in his home and lawn. He would shovel his neighbours’ snow, and after he got his snow blower, well, he would often continue right down the street. If somebody had a broken bike, he’d fix it.

He was a good golfer and very active. He could often be found practising his putting in the park, taking our dog Duke for a walk, playing baseball with the kids from the street and most evenings, after work, going down for a swim.

He loved photography and took great neighbourhood photos. He would often share them with David Van Dyke for his Deja Views column in the Beach Metro Community News. We could go on and on about dad, but you get the idea. He was a great husband, dad, friend and neighbour.

There are only a few families left in the neighbourhood who would remember these times, but to you new people on the street, he wasn’t always that old guy sitting on the verandah, he was once young and full of the future.

I’m sorry for your loss. My any chance was he related to a Raymond George Davis DOB May 13, 1942? They look remarkably similar.

Our Dad George Raymond Davis, known always as Joe was born May 4, 1922. Who is the person you know and where did he grow up (live)? Maybe we can compare notes

My father, Raymond George Davis. We have no info on his family other than he moved to Toronto in the 70s and married my mother, Dorothy Spickett. His parents were allegedly Raymond George Davir senior, or George Raymond Davis (I found a document with this name when I was a kid and he got mad about it). His mother was supposed to be name Margreat Davis from France (I was named after her) bruno matter how much I try I can’t find information on them. The picture of your father is strikingly similar to my father which had me wondering if perhaps they were somehow related. Please email me if you have any information. I have very little and we have been searching for years margreatdavis@gmail.com

He was born in Quebec, we’re not entirely sure where or if that is accurate. He disappeared in 1994, last known whereabouts was Winnipeg.

Sorry, here’s a little more info,
Raymond George Davis dob May 13, 1942, death unknown. I can send you an old picture of him. Black hair, blue eyes. First wife was named Joyce, had five kids with her in the late sixties and seventies before meeting my mother in Toronto.